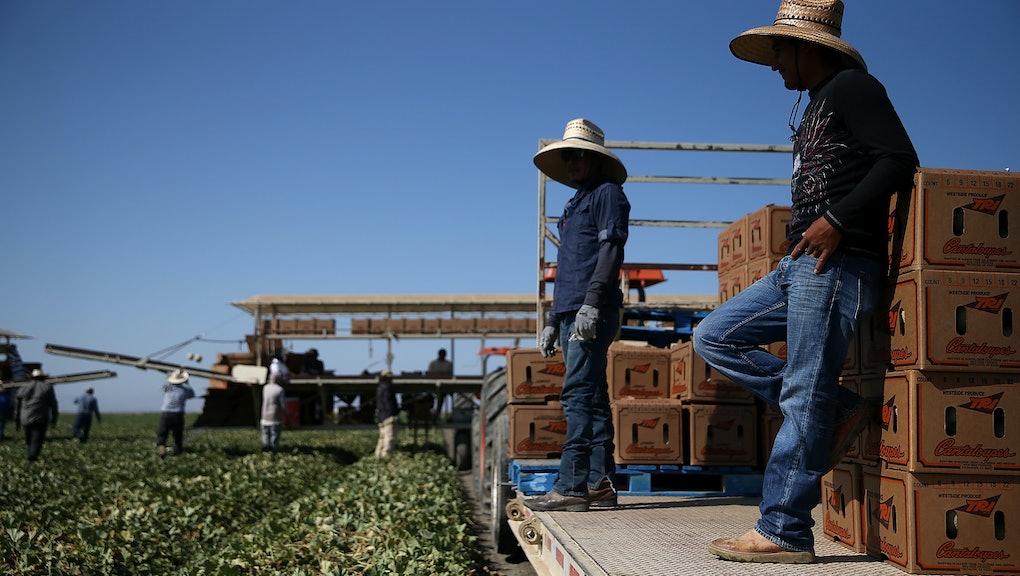 In the last year, there's been an upswell in anxiety across the Western world over the cost of immigration.

From Donald Trump's proposed 80-foot border wall to Czech police writing numbers on Syrian migrants to German far-right party leaders calling for migrants to be shot, mounting fear of foreigners is inspiring hostility among large swaths of society across the United States and Europe.

A significant part of the phenomenon is an overt or thinly veiled expression of racism and xenophobia, but some if it is also driven by a fairly rational economic question: When immigrants enter a society, are they taking jobs from and driving down wages for native workers?

Read more: Here's What'd Happen If We Tried to Build Trump's Wall — And It's Not What He Thinks

How the economy absorbs an influx of new workers with substantially different backgrounds from native workers is a complex issue that's consumed policymakers and immigration experts for ages. In the U.S., the question often hovers around less educated and lower-wage native workers — the segment of society that feels most threatened by migration from Mexico and Central America, and whose misgivings about it are key to Trump's ascent as a Republican presidential candidate.

A new study by economists Mette Foged of the University of Copenhagen and Giovanni Peri at the University of California, Davis offers some light on the matter. They used longitudinal data to study the effect of low-skilled refugees, who have been mostly fleeing conflict zones like Iraq and the former Yugoslavia, on low-skilled Danish workers from 1991 to 2008. What they found was that native Danish workers didn't suffer from their arrival, but actually received a small economic boost from them.

Foged and Peri found that low-skilled Danish workers didn't experience an uptick in unemployment, and in fact saw a small increase in wages by about 1-2% over the course of four to five years. How did that happen?

How it works: Part of the popular conception of how low-skilled immigrants operate is true. They often do take up jobs that are least desirable to native workers, and they often do them for lower wages. But they aren't a perfect replacement for unskilled native workers.

If you're an Iraqi refugee with a high school degree looking for a job at, say, a coffee shop in Copenhagen, you don't offer the same things as a high school-educated Dane. You probably don't speak or read or write Danish well, if at all; you very well could have a weaker education, despite holding formally similar degrees; you don't have a friend who knows the manager of the shop who can put a word in for you. In other words, Danish-born workers have an edge over you.

That edge played a role in the way that Danish-born workers adapted to the influx of refugees. They didn't simply get fired and replaced with cheaper labor, but rather over time were more likely to pick up work that actually complemented the work that immigrants were most likely to take on. They shifted away from manual labor to jobs that required language skills, more intensive customer service or had a managerial component.

"The simple model that there is one type of labor where everybody is the same, and if you add more workers the wages go down — simple demand and supply — doesn't actually work, because jobs are not all the same," Peri said in an interview. "Native workers respond to immigration, and they adapt in the direction of taking jobs that are somewhat different."

The new findings in Denmark provide some useful insight into the adaptability of low-skilled workers, but it's not a perfect piece of evidence, as refugees were distributed across the country through a policy that didn't factor in the demands of local labor markets.

But research in the U.S. on actual indicates similar trends. A 2012 study by Peri and Gianmarco Ottaviano of the London School of Economics on the effect of surging immigration in the 1990s and early 2000s found that there was almost no impact on the wages of low-skilled workers and a small positive impact on average U.S. wages. Peri thinks that the the same kind of dynamic in which low-skilled native workers move into jobs that complement the labor of low-skilled immigrants is at play.

It can be difficult to envision that transition being smooth, but it's important to remember that immigrants typically trickle into communities and workplaces gradually, and generally do so against the backdrop of a growing economy with increasing labor demands.

"In the agricultural sector, 40 years ago, a lot of Americans were workers in the field, but now there are practically no field workers who are U.S.-born — almost all the people in the fields are foreigners," Peri said. "But the agricultural sector has U.S.-born workers in other jobs, like supervisor, sales person and farm manager. We've seen similar things in the restaurant sector."

Peri is not the only one to make these kinds of findings. David Card of the University of California, Berkeley famously found that the refugee wave from Cuba in 1980 had basically no impact on the employment prospects or wages of less-skilled workers in Miami. Harvard University's George Borjas is the most influential critics of these findings, but his arguments against Card's study have been thoroughly debunked.

Low-skilled immigrants are not only fairly harmless for the employment prospects of working class Americans, they're also not a big part of the immigrant population. The larger part of immigrants today are highly educated; immigrants new to the country are in fact more likely than native residents to have a bachelor's degree, and the arrival of less-educated workers has declined dramatically over the past decade or so.

This isn't to say that low-skilled workers in the U.S. aren't feeling enormous pressure. They're suffering from decades-long trends in trade and technological innovation that have eaten away at industries that once held many more opportunities for them, and the social safety net meant to shield them from that decline is tattered. It's not hard to see how someone might start to get agitated at their strange new neighbors as they struggle to find or hold down a job. But there's little evidence that newcomers are the real problem.