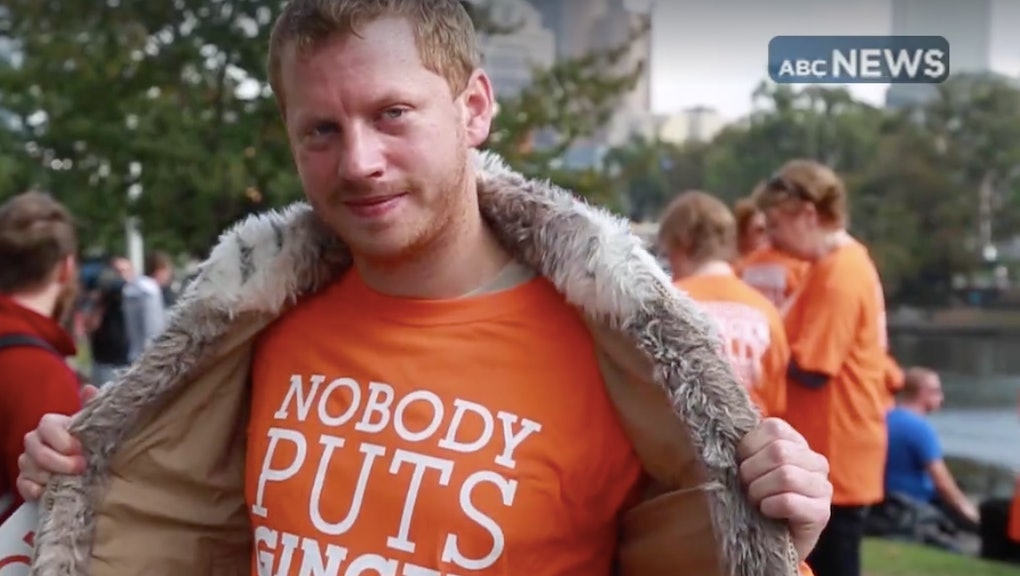 Hundreds Gather at Pride Rally in an Effort to Combat “Gingerism”

Redheads in Melbourne, Australia have had enough of your teasing, your taunting and your name-calling. They're over the mocking of their freckles and the ease at which they sunburn. To show just how much they're over it, they've hosted their very own Ginger Pride Rally.

On Saturday, hundreds of redheads gathered (with plenty of sunscreen) in solidarity against "gingerism," or the outright bullying, prejudice against and mistreatment of people with red hair.

Captured in a video by ABC News, the scores of redheads who attended came ready with signs that read, "Drop red gorgeous" and "Nobody puts ginger in the corner," in an effort to reclaim some of the names they were called in the schoolyard — or still, to this day.

"There are plenty of people that give redheads a hard time," Joel Cohen, one of the co-founders of Ranga, or the Red and Nearly Ginger Association, which helped organize the event, told Melbourne's Herald Sun. "The rally is a red alert to all gingers out there that want to celebrate how good it is to be bright orange or just a touch of ginge."

One of the goals of that organization, in addition to celebrating people whose "MC1R receptor is set in it's default position," is to provide resources, forums and events, such as this one.

"We've been called things like bluey, carrot top, copper top, Fanta pants, rusty crutch, all sorts of things, blood nut is another one," Aaron Webb, Ranga's other co-founder, told ABC News. "We can either say don't call us those names, or we can put such a positive attribute on those labels that they're not negative anymore."

Judging from the enthusiasm of the event, they were successful in doing just that.

Feel free to watch the entire dispatch from the Ginger Pride Rally below: