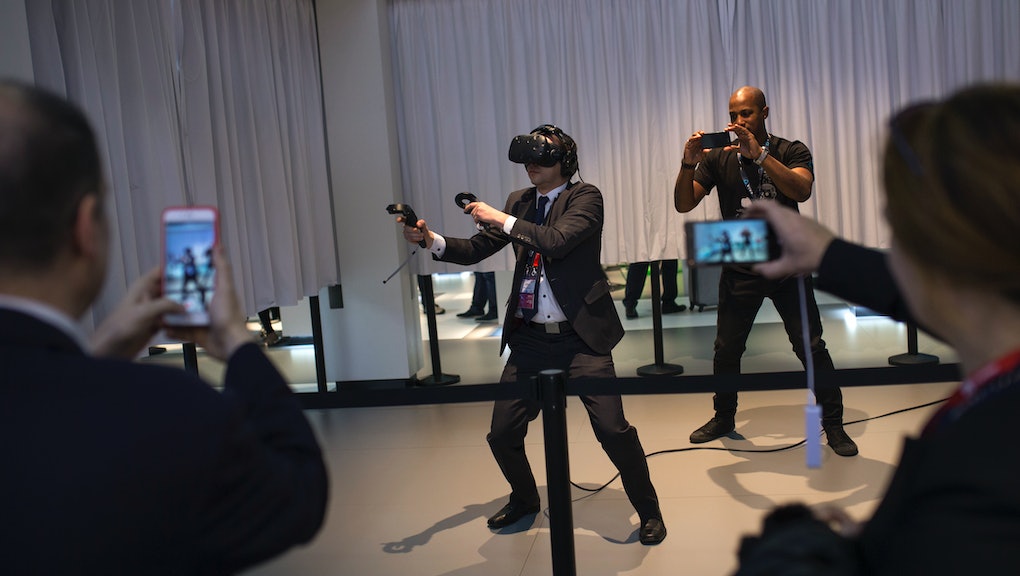 Gamers Wrapped Up in Virtual Reality Are Hurting and Embarrassing Themselves

The marks of a virtual reality early adopter now include red indents on the face, a bump on the head and maybe a bruise on the ass.

According to VR pioneers in a Reddit Ask Me Anything discussion on Monday, players wrapped up in the void may experience a jarring reminder that they are still physically existing in the meatspace. You know, like when you try to sit on a virtual couch in a furniture-free room, then fall and hurt yourself.

In the AMA, game developers for the HTC Vive shared anecdotes about "the most unexpected thing" playtesters did while playing. It appears gamers had trouble navigating where the virtual world ends and physical infrastructure begins.

The void may be endless, but your living room is not.

Joachim Holmér, a Neat Corporation co-founder who works on the game Budget Cuts, said that when players looked through a virtual hole in the ground, they would hit their heads on the floor. "It's amazing that players forget there's a floor," he wrote. "It's the one thing that'll always be there, regardless of room setup."

And yet another player attempted to "push their hand through the floor to sculpt something," said Nathan from world-building app SculptrVR.

A developer from game studio VRUnicorns, the company behind #SelfieTennis, confirmed this face-planting trend, writing that a player put their face on the floor to try and see through virtual ground mesh. "It's not a bug anymore, it's a feature!" the developer said.

Another sure bet for physical pain: the ceiling. "We have these lights hanging sort of low from the ceiling," wrote Eddie Lee from Funktronic Labs. "We had a playtester who was quite tall; he was playing the valve balloon demo, and right when he hit the balloon in VR, the controller happened to hit the real-life ceiling light. He commented, 'Wow! The haptics feel so real!'"

Also, walls. Even a developer made the mistake of colliding with the physical world. "I started forgetting which walls were virtual and which ones were real, and I ended up walking into a few very solid walls," said a Wobbly Duck Studios developer.

And while playtesters may forget the confines of their own rooms, said the HTC Vive game developers, they also tend to forget that what's in the VR demo isn't really there.

"Testers and devs have both tried to place the physical hand controllers on the virtual desk and then taken the headset off only to have them fall to the floor or quickly catch themselves before releasing it," said Patrick Devarney, a developer from Phaser Lock Interactive.

A developer from VRUnicorns mentioned playtesters trying to kick a virtual ball, trying to lean on a virtual table and nearly falling and throwing a VR controller on the actual floor in an effort to throw an object in the game. This is "ordinary" for developers, they said.

Another VRUnicorns employee confirmed that "a lot of players" kick the #SelfieTennis ball. He toyed with the idea of foot tracking in VR.

A developer from Alpha Wave Entertainment said someone once tried to sit on a virtual couch. Ouch.

VR companies saw this coming. Both HTC and Oculus specifically warn users in their safety manuals not to sit or stand on virtual objects that don't exist in the real world. It's a bit of a no-win situation — roaming around freely in a virtual world requires clearing out your furniture so you don't accidentally bump into a couch or a coffee table, but this commitment to immersion also leads you to believe virtual objects are there, so there's no physical furniture to break your fall when you try to sit in a virtual chair.

"Where did that bruise come from?"