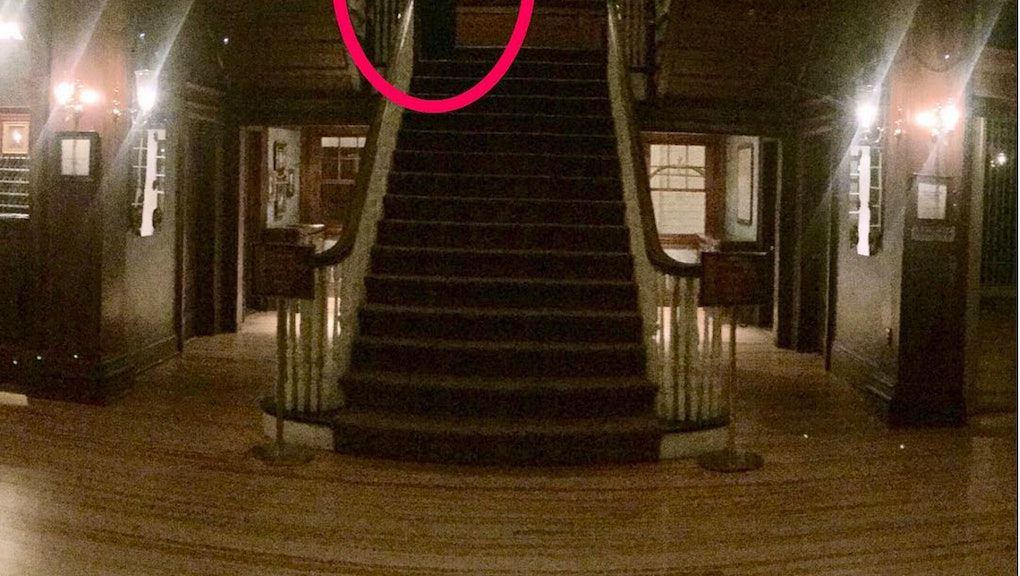 A Ghost Photo From the Stanley Hotel in Colorado Is Going Viral — Is It Real?

The photo from a visitor at the infamous and secluded Stanley Hotel in Colorado has set the internet ablaze, as it appears to show an image of a ghostly female figure at the top of the hotel's staircase. The photographer, Henry Yau, posted the photo on his Instagram for the world to see, and has said that he didn't see anybody at the top of the stairs when he took the shot.

Paranormal experts are already lining up to suggest the image is not only valid, but could be showing two apparitions: a woman dressed in black and a small child by her side. "We probably rule out about 95% what people think are paranormal or ghosts," paranormal expert Kevin Sampron said, in an interview with Colorado's KUSA. "Most of the time there's a natural cause for something ... This could be a legitimate ghost, as far as we can tell."

Another reason Yau's claims aren't immediately downplayed is the source of the image. The Stanley Hotel is most well-known for being the inspiration to Stephen King's 1977 novel The Shining, which had an aspiring writer act as the caretaker of a similarly secluded hotel with his wife and kid during the winter months before he slowly went insane and tried to kill them.

King said on his website that — having stayed at the Stanley Hotel in seclusion — he felt it was the perfect setting for what soon became a horror classic. "Wandering through its corridors, I thought that it seemed the perfect — maybe the archetypal — setting for a ghost story," King wrote. "That night I dreamed of my 3-year-old son running through the corridors, looking back over his shoulder, eyes wide, screaming. He was being chased by a fire hose. I woke up with a tremendous jerk, sweating all over, within an inch of falling out of bed. I got up, lit a cigarette, sat in the chair looking out the window at the Rockies, and by the time the cigarette was done, I had the bones of the book firmly set in my mind."

With that in mind, if you ever make a visit to the Stanley Hotel, like Yau, don't count out running into terrifying twins in the hallway, tempting you with the prospect of hanging out.

Read more: Ghosts Are Real and They're in This Viral Reddit Video