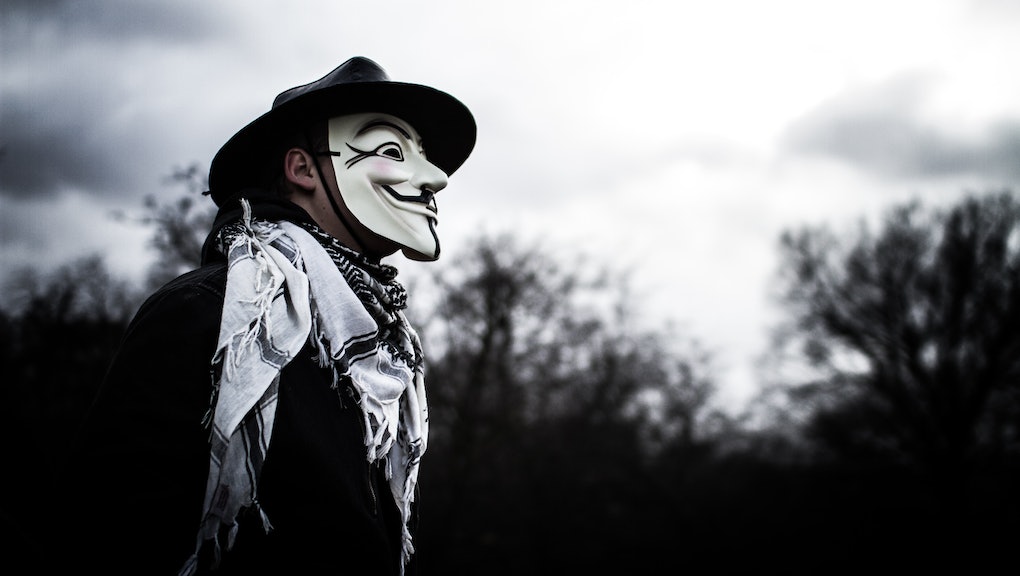 Melissa Webster's An0ns is "a character-driven Five-Act concept poetry book" [sic] spanning the history of Anonymous, inspired by the hacktivist collective. It was published earlier this month, and a portion of the book sales will be donated to Freedom of the Press and the Electronic Frontier Foundation.

"I started interviewing Anons and reading every news article, report I could find, following Anons on social media and studying/observing their voices/perspectives, and lurking/observing in chat rooms" Webster said in an email.

For a sample poem, try "Sexy Fawkes," from Act I:

Some say I am sexy

"When I decided to do this project, the Music Journalist in me kicked in and I thought about concept music albums, like American Idiot, that are individual songs put together to tell a big epic story, and it just clicked for me," Webster said.

Webster's work, like Anonymous', is largely concerned with working-class struggle, consumer capitalism and oligarchy, though she also winds through themes like online privacy, freedom of information, Jesus, her own femininity and sexuality, racial injustice, McCarthyism and the American Dream.

Other poems in the first act include "Hax0r," "50 Days of Lulz (Lulzsec)," "Namef@g" and "Memes." In Act V, "#OpWorld," Webster strikes at the gig economy ("be the Rockstar of your own poverty"). She spends a good portion of Act III writing paeans for the various famous Anonymous ops throughout history, like Project Chanology and Operation Payback.

From "Operation Avenge Assange," ostensibly about the WikiLeaks editor-in-chief:

Horrified, embarrassed, caught with their pants down

"While I relate to some and disagree with others, I respect their passion to take action for what they believed was right," Webster wrote in the forward to An0ns. "I also respect their ability to laugh at themselves and not take themselves and others too seriously, even when what they did was often serious and business that wasn't always legal."

I've never read On the Road, but if Jack Kerouac were a forum-lurker who hacked small-town municipal websites on a dare, this would most definitely be his first pass at a great American opus.