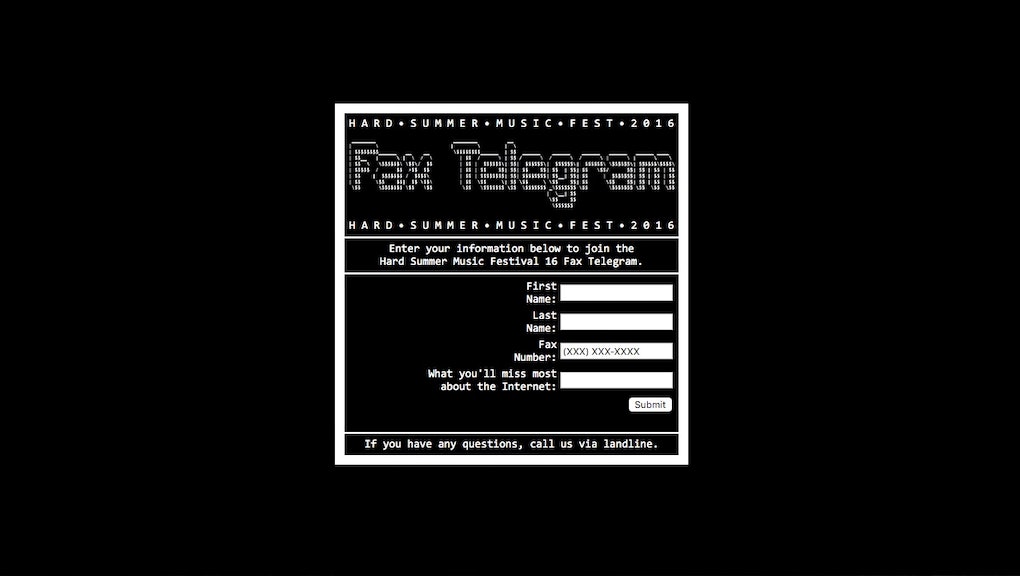 Pomona, California's Hard Summer Music Festival, known as Hard Fest, is keeping its lineup extremely close to the vest. So close that you'll have to hack into its website for any real information.

The electronic music festival, which attracted 130,000 attendees last year, updated its homepage on Monday night, locking the entire website behind a login screen that closely resembles a Commodore 64 terminal. Every page on the website is locked behind the screen, even if you Google the site itself.

Calling the number 1-844-HARD-16 on the bottom of the tweet connected me to a robotic operator, who said the following:

Can you imagine the world without the internet? Phones practically useless. Computers reduced to storage devices for photos and aging MP3s. Well, have no fear. Hard has set up this emergency number to get you vital Hard Fest information via hotline free from the net.

The hotline lets you punch in two numbers for more information. Continuing in this strange fictional universe without the internet, the operator instructed me to visit my local brick-and-mortar Ticketmaster location. And for more information about the lineup, the operator suggested sending a fax. Yes, sending a fax. (We're heading to FedEx for the fax and will update when we get a response from Hard Fest.)

A Reddit user even attempted to hack the festival's website to reveal the lineup. No such luck — it resulted in a blank green screen.

Hard's commitment to a post-internet system is part of a small alternate reality game — a cleverly designed marketing campaign that leverages the internet's inherent love of sleuthing. Alternate reality games, which are more or less convoluted scavenger hunts that get people calling in weird phone numbers, checking telephone poles around the world and solving cryptographic puzzles, have been surefire ways to build up hype for events or releases.

Game company Valve, for instance, teased characters and plot details for its game Portal 2 prior its release in 2011 by hiding messages in audio signals found in the previous game. The hints led users off to old bulletin board systems that could only be logged in to using old software and a 56K modem.

What Hard is attempting is pretty similar: While it's fairly uncommon to see a 56K modem, it's also rare to find an owner of a working fax machine — especially if you're not a government worker or lawyer.

Still, it's a pretty big wager to withhold the festival's lineup just to create a game. If concertgoers are nostalgic enough, it might play in their favor.