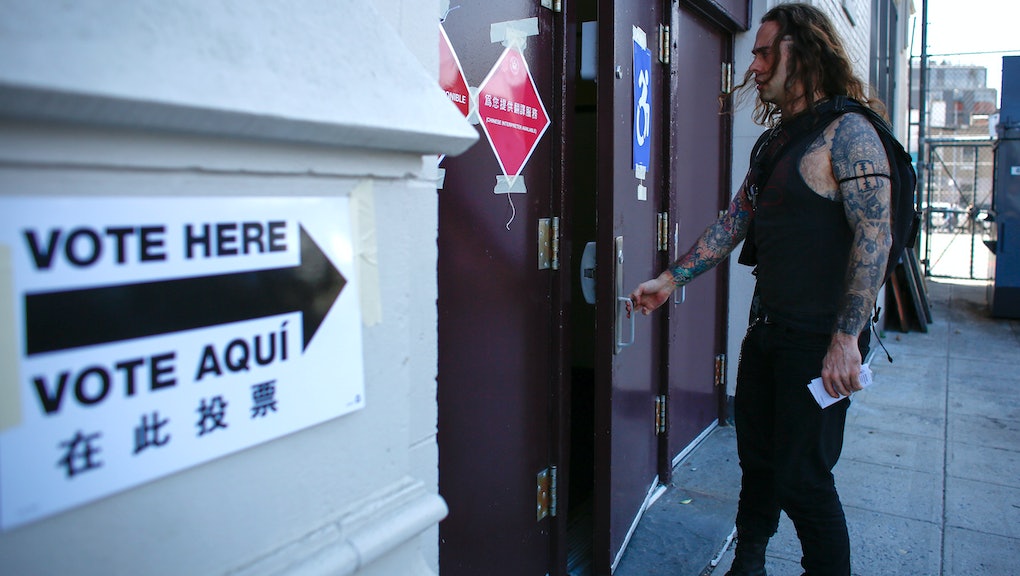 Top New York City officials are crying foul and calling for investigations after reports that thousands of Brooklyn Democrats were stripped from the voter registration rolls ahead of Tuesday's primary election.

City Comptroller Scott Stringer, a Democrat, said just hours before the polls closed on the presidential contest between Hillary Clinton and Bernie Sanders that his office would audit the long-critiqued Board of Elections over the removal of the voters and other agency failings.

"There is nothing more sacred in our nation than the right to vote, yet election after election, reports come in of people who were inexplicably purged from the polls, told to vote at the wrong location or unable to get in to their polling site," Stringer said in a statement.

In a letter dated and made public Tuesday, Stringer excoriated the Board — as have countless officials before him — for running a slapdash operation that left voters stuck with poll sites that opened late and were short on functioning ballot scanners, competent staff and answers about why their names might have vanished from the rolls.

The Board's top administrator said the changes to the voter rolls in Brooklyn — birthplace of Sanders — came as part of routine updates to the lists and supporters of particular candidates  weren't and couldn't be targeted.

Mayor de Blasio — who lived in Brooklyn's Park Slope neighborhood before moving to the mayoral residence in Manhattan — backed Stringer up in a statement of his own:

"I am calling on the Board of Election to reverse that purge and update the lists again using Central, not Brooklyn borough, Board of Election staff. We support the Comptroller's audit and urge its completion well in advance of the June elections so corrective action can be taken. These errors today indicate that additional major reforms will be needed to the Board of Election and in the state law governing it."

Michael Ryan, executive director of the bipartisan city Board of Elections and a Democrat, said in an interview that, as previously reported by WNYC, about 126,000 Brooklyn Democrats came off the rolls since November. That number, WNYC said, marked the largest drop-off in active Democratic registrations in New York State.

Ryan said if Stringer wants to conduct an audit, the Board of Elections will be "happy to cooperate" with him.

"The purpose of the [Board] is to put on fair elections. We endeavor to do that," he said. "I am just not seeing this disenfranchisement that other are referring to."

Suspicion in the streets: Still, the Twitterverse blew up with insinuations that Sanders supporters were being singled out and blocked from exercising their right to vote in a state Clinton once represented in the U.S. Senate.

Adding to the confusion and frustration of an already prickly contest: New York runs a closed primary limited to voters registered as Democrats or Republicans, and they can't cross party lines in their picks.

Of the Brooklyn voters recently taken off the rolls, Ryan said, 12,000 were confirmed as having moved away. Another 44,000 were placed on the "inactive" voter list.

Finally, 70,000 were reclassified from "inactive" to "archived," Ryan said, because they had not voted in two consecutive federal elections and did not respond to formal BOE mail warning that they were about to have their registrations shelved.

Other reasons voters can be removed from the New York rolls, with a cutoff of 90 days prior to an election, include: death, a felony conviction or being found incompetent by a court.

All not lost? The 44,000 Brooklyn voters moved to the "inactive" list can actually still participate in Tuesday's election — if they hurry. They can request and complete a paper ballot of the type also available to voters whose names can't be found in the registration book at their poll site.

"Their vote will count in the official results and they will be reactivated" as voters, Ryan said.

The 70,000 voters whose registrations were put on ice may also try to obtain ballots — and are being publicly encouraged by some advocates to do just that — but Ryan said those ballots will likely be deemed invalid and will not factor into the final results.

Seen this before: Problems with voting — in Brooklyn and beyond — aren't new. Neither are calls to investigate and fix those problems.

For example: Because of a screw-up, 1,600 votes cast by Brooklynites in the 2012 presidential contest weren't officially tallied and added to the results until 238 days after the election.

In that same election, hundreds of ballots that were cast but never counted were discovered in a folder in a Manhattan elections office months afterward.

The Board, overseen by 10 commissioners chosen by Democratic and Republican Party bosses, not the public, has been investigated and roundly slammed as an inefficient, anachronistic nest of patronage and nepotism that's resistant to change.

Its leaders, unsurprisingly, say they're doing their best under legal and budgetary constraints.

The polls in New York State close at 9 p.m.