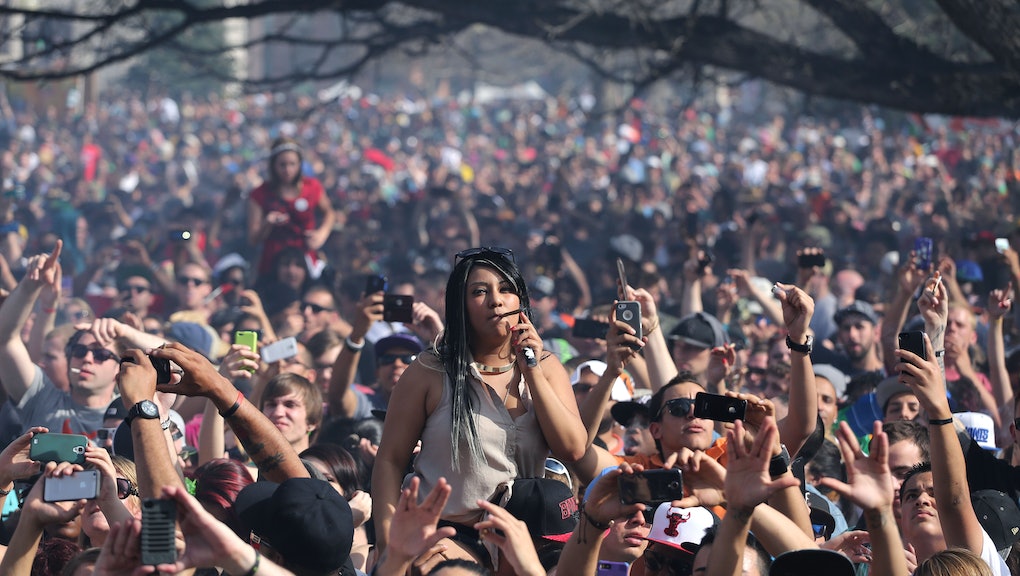 Sometime today, maybe two or three blunts deep into the 420 festivities, weed smokers across the U.S. may catch themselves thinking.

These thoughts will generally be positive. It's a holiday, after all, and — unlike Auditor's Day or Confederate Memorial Day — 420 is for everyone to enjoy. But as with most holidays, the good times can easily get derailed by a drunk family member or a hefty dose of systemic racism.

Today will be no exception. It's no secret that America's drug laws disproportionately target black people, but the degree to which that complicates 420 — a day dedicated to celebrating the good times associated with marijuana — is enough to put a damper on any holiday smoke session.

As munchies for thought, here are five reasons why the 420 festivities may give off a different energy for black people today — even as they celebrate just as enthusiastically as everyone else.

1. The war on drugs was invented to criminalize black Americans.

In a recent article for Harper's, journalist Dan Baum revealed that John Ehrlichman, a former domestic affairs advisor for President Nixon, admitted to him in 1994 that the War on Drugs had been created to criminalize black people:

"We knew we couldn't make it illegal to be either against the war or black," Ehrlichman is alleged to have said, "but by getting the public to associate the hippies with marijuana and blacks with heroin, and then criminalizing both heavily, we could disrupt those communities. We could arrest their leaders, raid their homes, break up their meetings, and vilify them night after night on the evening news. Did we know we were lying about the drugs? Of course we did."

The War on Drugs precipitated a major law enforcement crackdown on black communities over the past 40 years, sending thousands to prison for minor drug offenses. Marijuana criminalization has been one of the key to its escalation.

2. Black people are more likely to be arrested for marijuana possession that whites — by a huge margin.

The American Civil Liberties Union recently put together a handy interactive website, the Uncovery, that gives a state-by-state breakdown of marijuana arrest statistics.

The findings for every state are staggering, but on average nationwide, black people are 3.73 times more likely to be arrested for possession than white people — even despite using marijuana at comparable rates.

3. Even in states where weed is legal, black people are still arrested more.

Recreational marijuana use is now legal in Colorado, Washington, Oregon, Alaska and Washington DC. But as encouraging as these developments are, the trend has mostly benefitted white people.

4. Black people are less likely to own legal weed businesses.

The marijuana industry is growing at a rapid clip. Since legalizing the drug in 2014, Colorado has raked in $52.5 million in cannabis-related taxes, licensing and fees. By the middle of that year, 292 people had filed notices saying they planned to apply for vendor licenses.

But when it comes to opening businesses, black people have been shut out. In Colorado, only one black woman — along with a handful of black men — owns any of the state's 523 legal cannabis dispensary centers. Colorado law forbids anyone with a felony conviction for a controlled substance from owning a dispensary — a conviction that, due to unequal policing, black people in Colorado are more likely to have.

"When you start to look at the number of white males making billions off of this plant, and black males still serving time because of this plant, it does not make sense that in America, your zip code determines whether you're a millionaire or a felon," Wanda James, Colorado's only black female dispensary owner, told Mic's Darnell Moore.

5. Black people are over-criminalized for marijuana use and possession — but whites use hard drugs at far higher rates.

Marijuana is among the least dangerous controlled substances on the market. Even legal substances, like alcohol and tobacco, are considered more harmful by scientists.

Yet marijuana's continued criminalization only highlights the more pressing public health issues the U.S. is facing. A 12-year study from the American Journal of Public Health recently found that whites abuse cocaine and opioids at far higher rates than their Hispanic and black counterparts.

According to the New York Times, 90% of Americans who tried heroin for the first time in the last decade were white. Despite a renewed emphasis on opiate abuse treatment, time and resources nationwide are still dedicated to arresting, and even jailing, people for weed.