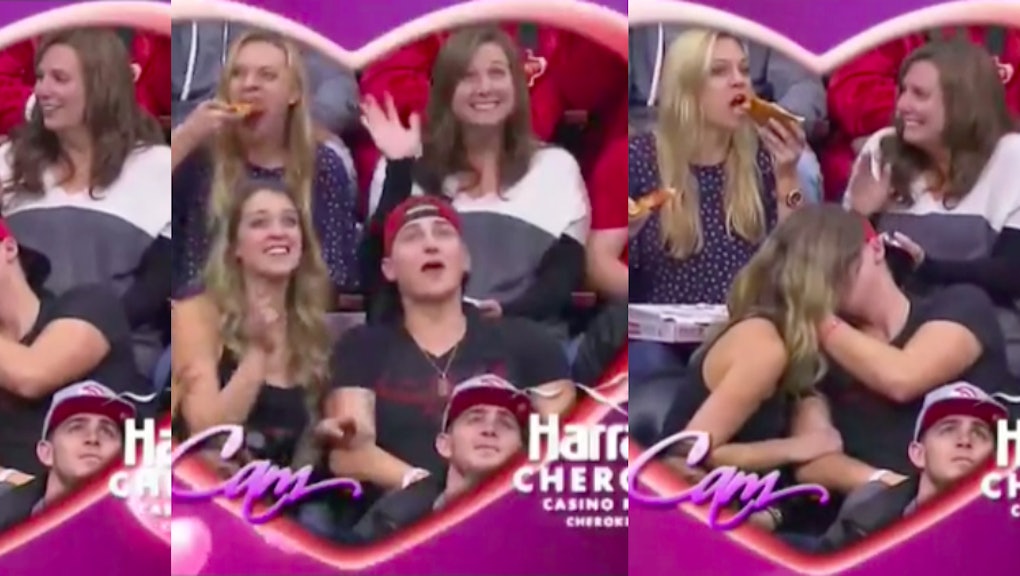 Many people agree that pizza is bae. Some have said that it is better than or equal to sex. At least one woman has posed for engagement photos with a box of pizza.

And now a woman is going viral for shotgunning two slices of pizza at the same time, all while being recorded on the kiss cam at a basketball game.

You'll notice that right below our pizza-eating heroine is a couple making out in traditional kiss cam fashion. The setup makes for a stark contrast between "boring ol' straight couple that probably likes wicker furniture and malls" and "sassy blonde free spirit who just has her two slices of pizza and a dream, man." Like pizza itself, this narrative is totally bae. #SingleLife #Goals!

But! Does our pizza-eating heroine seem suspiciously over-prepared to stage a viral kiss cam moment? I mean, look at how she just has both slices of pizza at the ready, and then quickly decides to take bites from each one in quick succession. Her timing is impeccable. It's also worth noting that this video was taken during Tuesday's Hawks-Celtics game, which For the Win points out was so boring that a staged kiss cam gag would be entirely in the realm of possibility. After all, it's happened before.

But real or fake, the Vine that resulted from it stands on its own as an inspirational six seconds of internet content. As the old song says, "When the kiss cam hits your eye while eating a big pizza pie, that's amore."