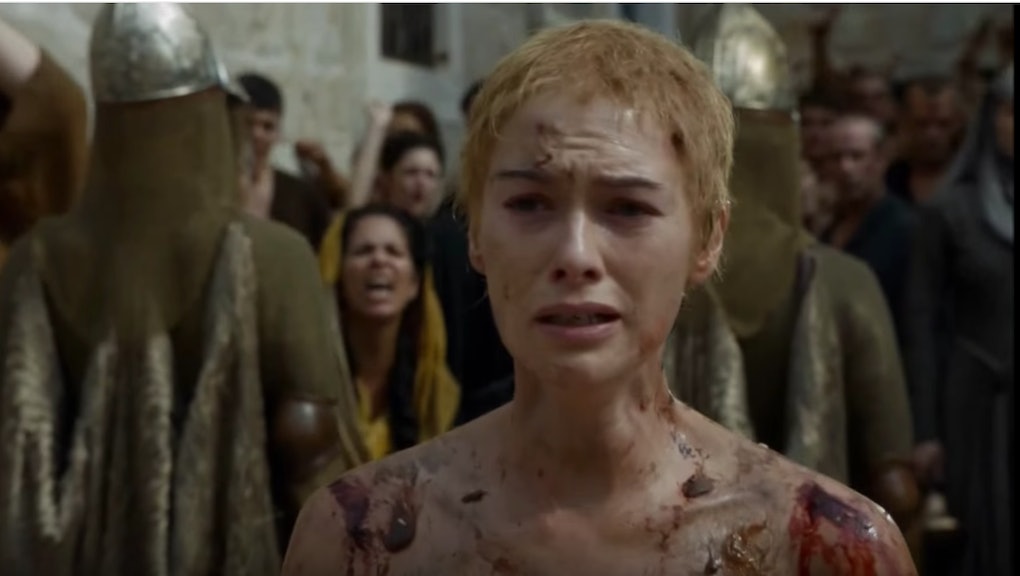 Several characters on HBO's Game of Thrones endure hardship and death, but one of the cruelest fates of season five was reserved for Cersei Lannister (Lena Headey). Imprisoned by the religious sect she had empowered, Cersei is forced by the High Sparrow (Jonathan Pryce) to repent for her sins of adultery through a Walk of Atonement across the streets of King's Landing.

It's a gruesome, compelling scene that puts one of the series' most intimidating figures in her most vulnerable state — quite publicly. For the sequence, Headey's face was digitally added to a body double, Rebecca Van Cleave, and Headey was very complimentary of the actress for assuming that part of the emotional scene. However, Headey said she has received flak for not performing the nude scene herself.

"Some people thought I was less of an actress because I didn't get my tits out," Headey told Entertainment Weekly:

It was really a bit shocking. I've done nudity. I'm not averse to it. But I know I'm a very emotional actor and I get really driven by that. In order to do my job, I allow myself to be really vulnerable. I don't know any other way to do my job. Things really affect me. And the thought of being naked for three days and trying to contain her in the way she would be, I think I would feel very angry. I didn't want to be angry. I don't think Cersei would be angry. I did what I thought she would do, emotionally. And wonderful Rebecca was able to contain herself and be naked. She found it very difficult, obviously. It's not a natural thing to do. I film every year and I have kids and they know me now and [being naked in the scene] was just too much on top of that. So yeah, people that get it thought it was great. I didn't phone it in; I was actually there for three days with Rebecca.

The actress added she did not play a part in the casting of Van Cleave, noting the assumption that she wanted a "hot body" for her double is false. Certainly, most critics didn't mind, as Headey was nominated for best supporting actress in a drama series for the 2015 Emmys.

Cersei will return to Thrones in season six following the traumatic punishment, coupled with the death of her daughter, Myrcella (Nell Tiger Free). According to Headey, the show just keeps getting better. Sunday can't come soon enough.

"It's so juicy, and it's so fucking dark, and so emotionally clever, in this landscape," Headey told Entertainment Weekly. "It sounds so cheesy, but I'm really grateful to be part of something so cherished."

Read more: Does 'Game of Thrones' Use Body Doubles?