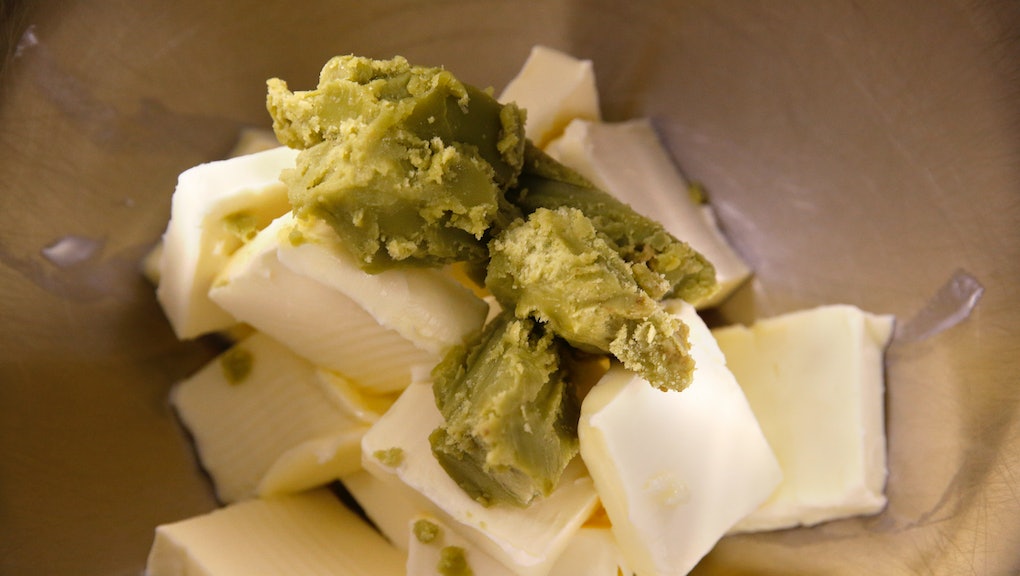 Weed Butter: Here's Everything You Need to Know About the Most Fun Way to Get High

Marijuana edibles have long evolved past the tray of random brownies at a house party.

Thanks to its legalization, marijuana is slowly shedding its stigma and creeping further into normalized lifestyles. One such way is through food.

Marijuana edibles remains relatively new territory for many, but people are picking up on its health benefits, including a high that's rather different from smoking. Eating marijuana processes it through the liver, so the chemicals of THC become metabolized into 11-hydroxy-THC, according to the Daily Beast. This process gives users a slower, longer high — which many medical marijuana patients have found useful.

To make edibles, you need to fuse together marijuana's psychoactive ingredient, tetrahydrocannabinol, or THC, with a fat, such as oil or butter, in a process that starts off with something called decarboxylation, High Times reported. That's basically heating up the dry plant matter so that the THC loses its acid group and becomes active — it's similar to how you'd burn weed to smoke it.

After decarboxylation, people can choose to infuse the marijuana with butter or oil. However, it's the oils with the highest fat content, like coconut or olive, that'll absorb the most THC, according to the Cannabist.

If you're making oil, keep it at low heat when you add the cannabis. Otherwise you risk burning off the THC, the Cannabist reported.

Simmering the weed and fat together in a double boiler for about three hours, straining the plant matter out and then cooling it finishes off the cannabis butter so it's ready for any recipe.

Ready to try it? To get you started, here's a cannabis butter recipe from RuffHouse Studios:

1. Grind up cannabis and bake in the oven for 20 minutes at 350 degrees Fahrenheit until dark.

2. Clarify the butter by melting it on the stove and waiting until the milk solids separate by rising to the top. Scoop this nonsense out.

4. Remove the double boiler and press it through a strainer, pushing the oil out with a spoon.

5. Cool and then refrigerate.