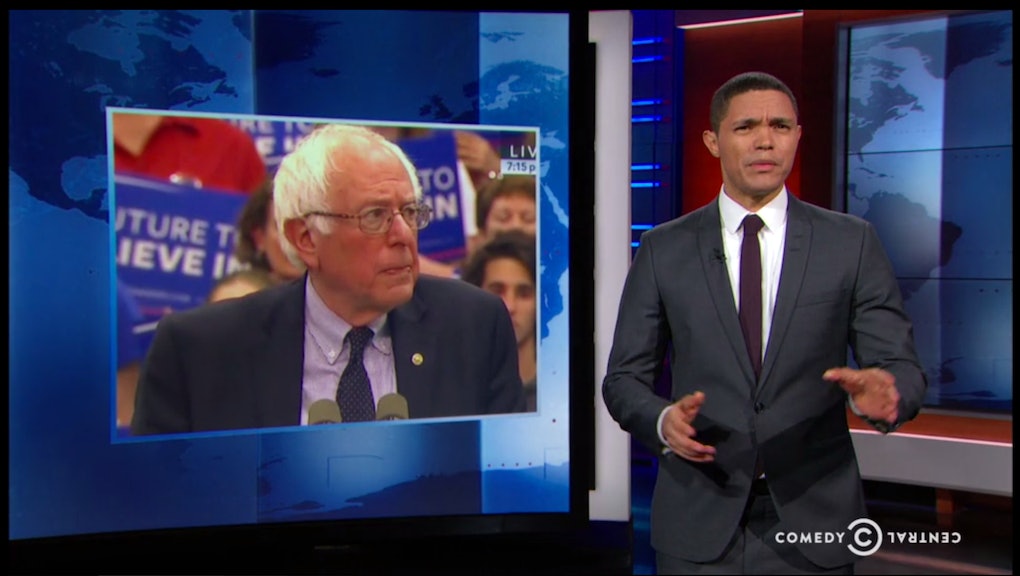 Until New Yorkers took to the polls Tuesday, Bernie Sanders had been closing the delegate gap in his primary race against frontrunner Hillary Clinton, but a convincing win for Clinton had the Sanders camp blaming voter suppression.

But on Wednesday's episode of the Daily Show, host Trevor Noah was having none of it, saying the Sanders campaign rhetoric sounded "a little paranoid."

"You know what many people love about Bernie Sanders?" Noah posited. "His blunt honesty. Yeah, he speaks his mind. Although, you have to admit, sometimes he comes off a little paranoid. In moments, he sounds like a senior citizen who doesn't trust his Jamaican nurse. 'She's laughing at me. She thinks I don't know, but she's stealing my goddamn Snickers! Something's going on.'"

Joking aside, Noah did agree that Sanders' notion is correct — and any voter suppression is unjust — but those restrictions don't just apply to him.

"Bernie Sanders is right about some things," Noah says. "Voters shouldn't be purged without reason or warning and polls shouldn't open when people are already at work. But everyone is playing in the same system, and the rules apply to everybody. And Hillary, say what you want about her, she played the rules right."

Check out the clip here.