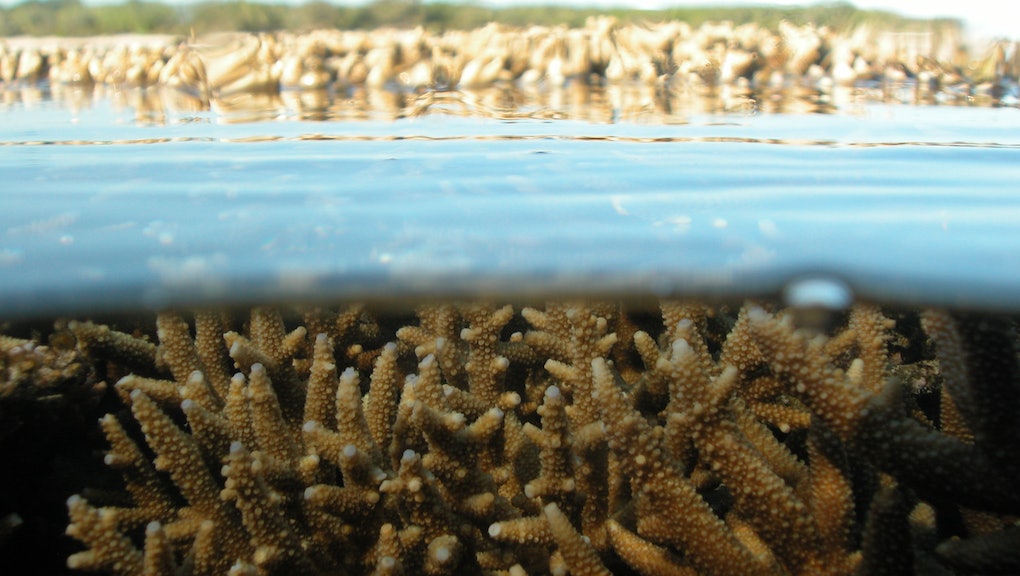 93% of the Great Barrier Reef Has Been Damaged By Coral Bleaching, May Devastate Reef Life

A round of surveys investigating the extent of damage to the Great Barrier Reef has come back with chilling results: Nearly 93% of the system has been damaged by "light to severe" coral bleaching.

When an El Niño season combines with human-generated greenhouse gas emissions, the water swirling in the Pacific Ocean heats up.

After a month or two of warmer-than-usual water temperature, the conditions can shock the coral systems that exist in it, creating a bleaching phenomenon. Coral that sustains severe bleaching dies — which can have dire consequences for the 25% of marine species the reefs shelter.

Colorful coral structures provide cover for aquatic species that weave in and out of the watery landscapes they adorn, but warm water temperatures cause the algae that creates their colors to separate. What's left is the skeleton of the coral — faded, white and devoid of marine life.

The scientific community has not hidden its feelings following the announcement of the damage the reefs have sustained.

"My veil is down," Professor Justin Marshall of the University of Queensland, told The Guardian.

Marshall, who has been diving the Loomis Reef in Australia for more than 30 years, has begun referring to the reef in the past tense in conversations.

"I have cried. I have broken down in front of cameras. This is the most devastating, gut-wrenching fuck up," he said.

When students visiting Loomis Reef ask Marshall where the fish have gone, he says he doesn't mince words with his answer.

"Well, they have either moved on, died ... I don't know. But you lose the small fish, then the bigger ones ... then it all collapses," he said.

This should serve as a reminder of humanity's impact on the environment and a stark warning on how climate change can cause the potential loss of one of the planet's great wonders.