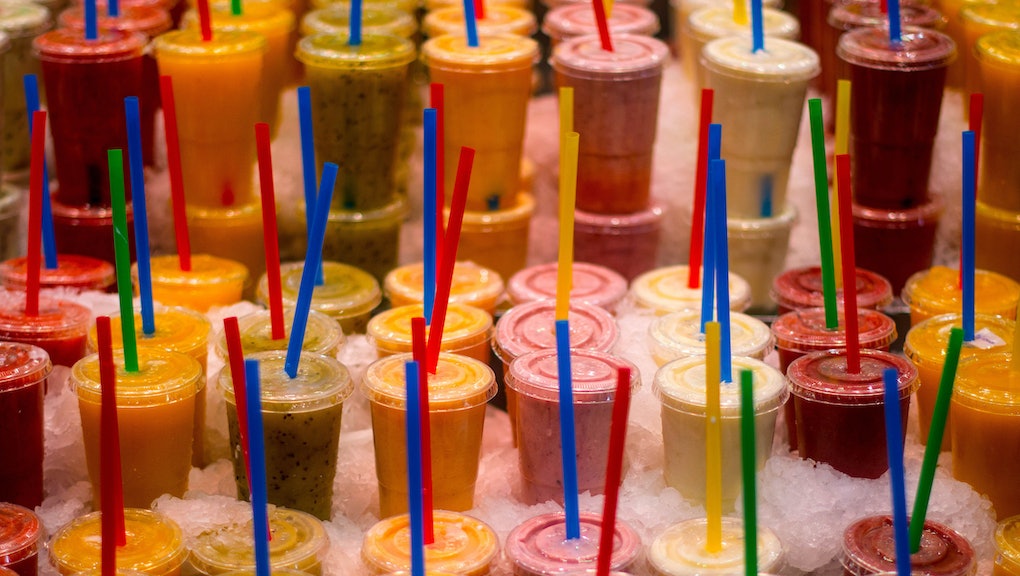 Put down the straw. It's time to start chewing our food again.

That's right, folks: After two decades as the must-have health accessory — a cult of nutrition junkies trailing in its wake — fancy juice has reached its peak.

Perhaps it was the recent news of juice-cleanse evangelist Gwyneth Paltrow's $500 breakfast smoothie — the one made of milk, almond butter and sparkly magic pixie moon dust. Though not technically a juice, per se, it's still an exorbitantly priced beverage with a lot of dubious-sounding health claims.

Or perhaps it was when so-called "raw-food evangelist" Doug Evans raised $120 million from Silicon Valley investors to fund a $700 juicer. Nothing could make the Juicero press worth its ridiculous cost — not even the fact that it has its own app, or that you don't have to clean the damn thing.

Now, the New York Times — who once referred to the cold-pressed juice industry as an "entrepreneurial gold rush" — is calling bullshit on fancy juices' purported health benefits — namely, the widely-held belief that juices cleanse the body of toxins.

"To say that drinking juice detoxifies the body isn't quite the same as claiming leeches suck out poisons, but it's fairly close," an April 20 Times story declared.

Juice companies will have you think otherwise. Juice Press claims that if you don't "feel fabulous" after a juice cleanse, it's because you still "have more to detox from." Liquiteria suggests "cleansing allows you to naturally energize, replenish and detoxify your body at the cellular level." Juice Generation charges around $6 for a drink called "Daily Detox."

We don't need help: As the Times' most recent story points out, your body rids itself of harmful toxins, like alcohol, all on its own — regardless of how much kale-ginger-beet elixir you drink.

"The human body is well designed to eliminate wastes and toxins, and a number of organs play a role," Dr. James H. Grendell, chief of the division of gastroenterology, hepatology and nutrition at Winthrop-University Hospital in Mineola, New York, told the Times.

It's the same reason hot yoga's alleged benefits are lies. Our body has a natural detoxification system, and it begins with the liver.

Our body has a natural detoxification system, and it begins with the liver.

The liver acts as a filter for our blood. When it finds nutrients in our blood, it either converts them into energy or stores them for future use. When it finds toxins, it sends them to be eliminated via the intestines and kidneys.

The Times might have mentioned that to Paltrow, who told the paper in March that she visits saunas to "sweat out" airplane germs. Eliminating toxins has nothing to do with sweat; they exit the body via poop and pee.

"It's hard to understand" why people think juice aids in the process, Dr. Grendell told the Times, "because there is no good scientific evidence that a juice cleanse, or any other food for that matter, is particularly relevant to removing toxins."

Juice still has its benefits. Juice squeezed from fresh fruits and vegetables is more nutritious than sugary, whipped-cream-topped Frappuccinos. It's also a convenient way to consume healthy foods on-the-go: I wouldn't gnaw on a carrot or a beet on my morning commute to work, but I'd certainly sip them through a straw.

But if you're forking over your life savings to detoxify with kale juice, don't do it. You have a liver, and it's free.