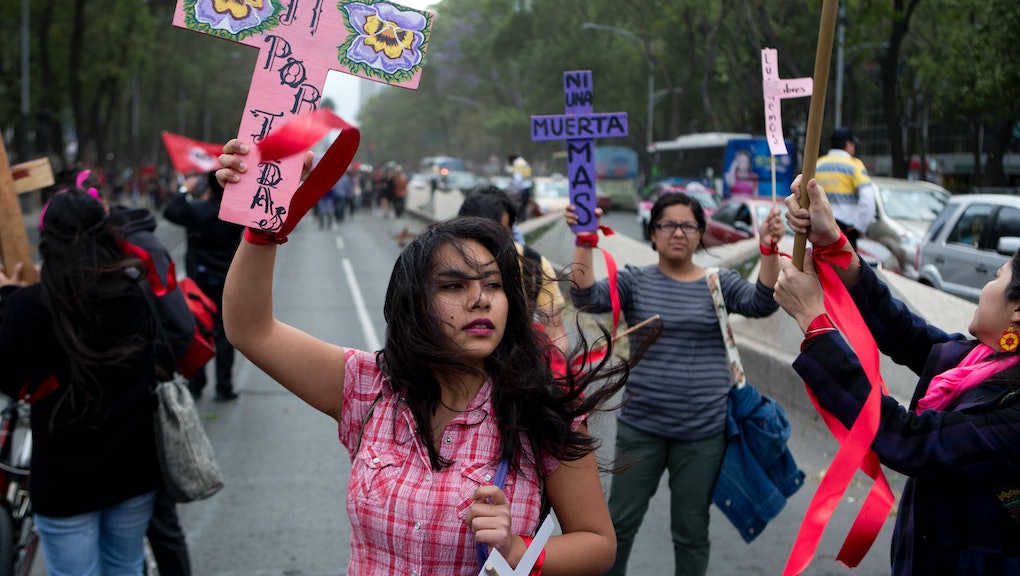 A group of women in Mexico have launched a social media campaign encouraging people to speak out against sexual assault. They are rallying around the hashtag #NoTeCalles, or "Don't Stay Silent."

The video for the campaign features three women known for their involvement in highly publicized cases of sexual assault in Mexico City: feminist icon and activist turned politician Yakiri Rubio, who spent three months in jail for killing a rapist in self-defense; Gabriela Nava, a university student who was sexually assaulted on public transport by a university staff member; and American journalist Andrea Noel, who was attacked on the street by a man who reached under her skirt and pulled down her underwear.

The video says that there are 1,643 sexual assaults in Mexico every day. But even that number might be low, as "most cases go unreported," the activists say in the video. Why? "Because the authorities blame the victims."

Translation: "When they touch one of us, we all respond."

Gendered violence is a widespread epidemic in Latin America, and Mexico is considered one of the most dangerous countries for women, according to a 2010 United Nations report. Murdering women with impunity has become so common in Latin America over the past few decades that a new Spanish word has emerged to describe gender-based killing: feminicidio, or "femicide" in English.

The National Institute of Statistics and Geography estimates that 63% of Mexican women over 15 have experience gendered violence and seven die from femicide every day.

The new #NoTeCalles campaign is part of a growing movement among Latin-American feminists, who are using hashtags to organize across borders and fight gendered violence throughout the region. Since 2015, different ongoing campaigns like #NiUnaMenos (translated as "not one less") and #VivasNosQueremos ("we want to live") have united millions of women from Argentina to Mexico City.

Many Latin American women are now combining these hashtags with #NoTeCalles. The tweet below demonstrates the various ways that Mexican women are harassed on public transit, accompanied by the caption: "It's not flattery, it's harassment. Denounce the disgusting harasser! The is no justification for sexual violence. If they touch one of us we all respond!"

This content was originally published by teleSUR at the following address:

This content was originally published by teleSUR at the following address:

Sexual abuse is a crime, emphasize the women in the video, and that crime is This content was originally published by teleSUR at the following address:

The activists in Mexico are encouraging women to keep reporting sexual assault to the police and not accept the cultural climate of victim-blaming. "Do not stay silent, report them," the activists say in the video before declaring the slogan: "When they touch one of us, we all respond."