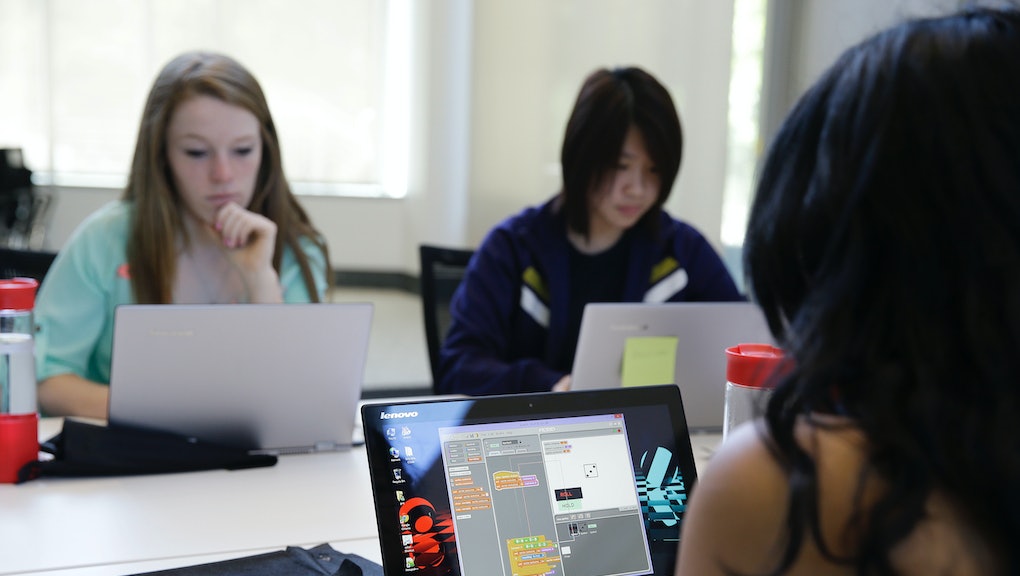 "I couldn't really sit by and let him do that," Amilia St. John said in a phone call.

Amilia St. John's dad is Alex St. John, a game developer who became infamous for his blog post on VentureBeat and his recruiting slides that featured derogatory comments about women, minorities and disabled individuals in technology.

Amilia St. John is a 22-year-old developer. On Thursday she called out her dad's "toxic waste trash fire" in a blog post.

"I felt compelled to respond to my father's sexist, ableist and racist rants," she wrote in the post.

It's time to call out her father's bullshit. "I've obviously been privy to my dad's explosions for quite some time," she said. "I think calling him out will make a lot of people reconsider opinions that they might have."

Alex St. John's recruiting slides recently surfaced, Kotaku reported, expressing his ideas of what it takes to be an engineer — one that asks hiring managers to look for "the undiscovered Asperger's engineer" — one that has "no social skills" and will "generally marry the first girl they date." He even used a photo of his daughter in a slide about "NOT male engineers."

This treatment of women and minorities in tech isn't breaking news. In 2012, Ellen Pao filed a gender bias lawsuit against Silicon Valley venture capital firm Kleiner Perkins Caufield & Byers, where she was a partner. The case brought to light issues of sexual harassment and the serious double standards women face in the workplace. She lost the case, but ignited a conversation on gender and minority disparity in Silicon Valley.

There's a serious lack of diversity in Silicon Valley. The workforce of its top tech firms is made up of 83% men, 94% of whom were white or Asian, according to the Department of Labor, as reported by Mother Jones.

She's turning her father's mess into the ignition a movement needs. Amilia St. John sees her father's rants as an opportunity for us to talk about the issues women, minorities and people with disabilities face in technology, and why opinions like his "are ruining progress."

That's why she's working to get women excited about technology — to bridge the gap. To make individuals with the same point of view as her father shut their garbage fire traps.

I asked Amilia St. John if she thinks her post will change her father's mind. She laughed.

"Considering that my dad just wrote an article called 'I Apologize,' in which he very sarcastically did not apologize, I don't think he will. He doesn't see that he's wrong."

The post may have been fueled by her father's words, but it was intended for a larger audience. Amilia St. John's blog post wasn't a clapback intended to feed her father's fire or make him reconsider his ignorant ideology — she said she hoped middle schoolers and high schoolers would read and gain awareness of the issues women and minorities face in the industry.

"I know my dad won't change his mind and I know he won't listen to what I have to say," she said, but she hopes his opinions and the upset caused by them will inspire others to take action, speak up and curb the imbalance.

Amilia St. John wants readers to click the links at the bottom of her post — links to resources that will help tip the scales and encourage more women and minorities to get involved in the industry.

"I want to spark change."