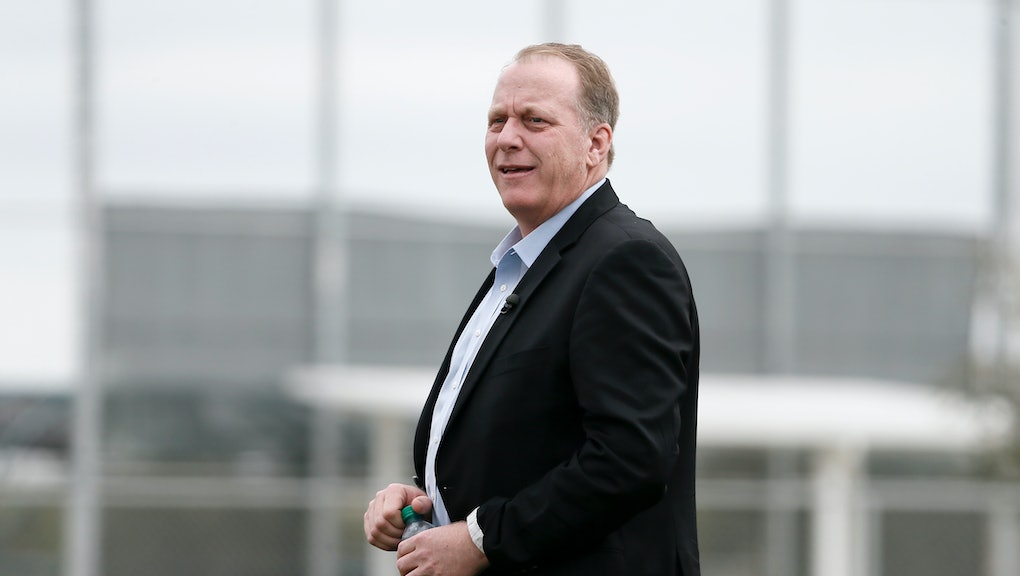 On Wednesday ESPN joined a growing list of brands to take a public stance against transphobia.

Curt Schilling — a former MLB All-Star pitcher and, until recently, a Monday Night Baseball analyst for the network — posted a meme to his Facebook page showing a heavyset person with ripped black clothing, heavy eyeshadow and exposed nipples paired with the caption, "Let him in! to the restroom with your daughter or else you're a narrow-minded, judgmental, unloving, racist bigot who needs to die!!!"

The meme was an appeal to those scandalized by recent developments in public discourse, which held that people should be allowed to use gender-specific public facilities — namely bathrooms — according to their gender identities rather than the sex that appears on their birth certificates.

Schilling doubled down on his rhetoric in the comment section below his post. "A man is a man no matter what they call themselves," he wrote, according to the New York Times. "I don't care what they are, who they sleep with, men's room was designed for the penis, women's not so much. Now you need laws telling us differently? Pathetic."

By now, a growing number of Americans have accepted that transgender people should have an affirmed and legally protected spot on the gender continuum. The lines that, for many, once divided male from female and gay from straight have all but crumbled, paving the way for queer, trans and gender-nonconforming individuals and even celebrities to live on their own terms.

Schilling, for his part, had been in trouble with ESPN before. In August, he shared a meme on Twitter that read, "It's said only 5% to 10% of Muslims are extremists. In 1940, only 7% of Germans were Nazis. How'd that go?" That earned him a suspension from the network. But Islamophobia in 2015 struck a different nerve with ESPN than transphobia does in 2016.

It shows in the differing severity of his punishments. "ESPN is an inclusive company," the network wrote of Schilling's firing. "Curt Schilling has been advised that his conduct was unacceptable and his employment with ESPN has been terminated."

Indeed, ESPN is a company that continues to employ who openly speculate as to the responsibility women have to avoid getting assaulted by their boyfriends, and who call homosexuality "an open rebellion to God and Jesus Christ." That ESPN deemed transphobia the fire-worthy tipping point is significant, at least symbolically.

Perhaps as significant is that the so-called "worldwide leader in sports" is not alone in its stance. Since North Carolina Gov. Pat McCrory in March signed into law a bill that sets rigid divides in who can access public restrooms, a growing number of big companies have spoken out against the state.

According to Esquire, Pepsi, General Electric, Hyatt, Hewlett Packard, Whole Foods, Levi Strauss and Co. and PayPal are among the corporations that have either called on McCrory to repeal the law, spoken out against it or implicitly threatened to take their business elsewhere. Professional sports leagues like the NBA and NFL have also followed suit.

It's unclear whether these, or any of the boycotts announced by artists slated to perform in North Carolina, would actually have an economic impact on the state. What is clear is this: The brands have weighed the costs and benefits of standing against transphobia in North Carolina and decided taking such a stance would not negatively affect their bottom line.

That this stance is not even considered risky — brands tend to avoid positions on social justice issues if they actually threaten their survival, after all — seems to indicate a recognition, on their part, that trans advocacy is now a popular position. As recently as the last decade, this would have been nearly unthinkable.

So even as America's politics often continue to advocate bigotry and oppression, it should hearten us that we've convinced the brands — the companies that dictate how we consume and interact with the world around us — to see us in a much more flattering light.

Now, if they'd only hire us.