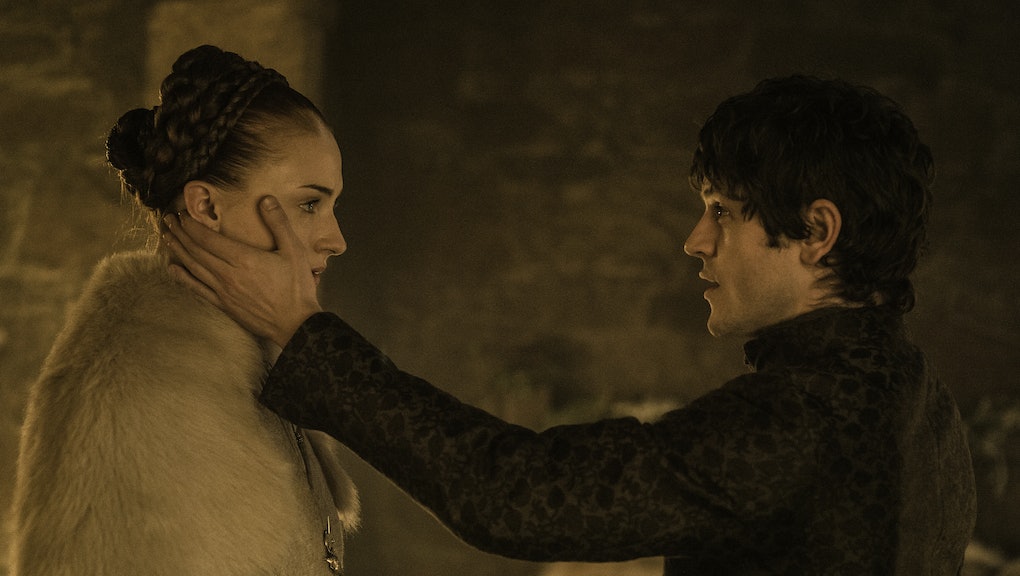 'Game of Thrones' Will No Longer Follow the Books, So It Must Curb Its Sexual Violence

The ever-popular Game of Thrones falls into unfamiliar territory at the onset of its sixth season. For the first time, the series has eclipsed the majority of the narrative in the A Song of Ice and Fire novels from George R.R. Martin, which formed the first five seasons' source material.

This presents a quandary for fans who are also book readers. The show will likely answer key questions ahead of the books, like the eventual fate of Jon Snow (Kit Harington) and his true parentage. However, this new scenario also presents an opportunity for HBO to break from the pattern of repeated graphic sexual violence towards its female characters. This choice is paramount to the show's identity and, ultimately, its legacy.

In prior seasons, the internal defense of the show has been that it's a reimagining of important moments from the source material. These scenes were warped from their book incarnations, though, either swapping out the character for said event with another or making a previously consensual scene unnecessarily nonconsensual.

Most recently, and controversially, in season five, Sansa Stark (Sophie Turner) was raped on her wedding night by new husband Ramsay (Iwan Rheon). The scene depicts Ramsay ripping off Sansa's gown and, as he forces himself on her, we're shown Reek (Alfie Allen)'s anguish as he watches Ramsay perform the act.

There are several reasons this scene was so poorly handled, and why even its most high-profile fans boycotted the show after the episode. For starters, the misery is portrayed from Reek's perspective, rather than Sansa's — the assumption being his suffering is somehow on par to hers.

"It was almost worse the way Jeremy Podeswa's camera lingered on Alfie Allen's tear-filled eyes, as if his violation was somehow equal to Sansa's; as if this disgusting act was somehow part of Theon's long and ugly path to redemption, not a brutal and unwarranted violation," Andy Greenwald wrote for Grantland. "Five seasons in, Game of Thrones is long past the point of earning gold stars simply by showing us the worst possible thing."

Moreover, it undermined Sansa's exciting and progressive character arc in season four. Under the tutelage of Littlefinger (Aidan Gillen), she was finally learning how to play the game, and essentially, shape her character to one in a position of power. This was encapsulated with the final shot of Sansa in the fourth season, as she struts down the stairs at The Eyrie with a new, confident look in the guise of her mother (which commonly became labeled "Dark Sansa").

The character's progression suffers a massive relapse, as it's revealed that Littlefinger plans to marry her off to Ramsay, and is ultimately shattered in the rape scene. It's also a moment that is transposed to her character as it happened to Jeyne Poole, who isn't even on the show, in the books. And how does this affect the audience's view of Ramsay, one of the worst characters in modern television? It doesn't.

It's not the first instance that the show has been mired in controversy over a rape scene, either. At Joffrey's funeral in season four, involving the incestuous romance of Jaime (Nikolaj Coster-Waldau) and Cersei (Lena Headey), Jaime forces himself on Cersei as they're both welled up with emotion over his death. The event happens in the books, but it's entirely consensual, and while it has been denied that the scene depicted was meant to be a rape, that's not how many viewers construed it.

"The way Jaime is depicted afterwards, it's pretty clear you are supposed to view him as the hero or more on the progress of being a better person," Ringer staff writer Alison Herman said in a panel of female TV critics discussing Game of Thrones with Complex. "It's unfortunate that you don't see any ramifications of it, either in Cersei or in the depiction of Jaime as more of a flawed protagonist."

Violence will always play a part in Game of Thrones; it's one of the most violent shows in modern television. However, the show has shown on multiple occasions that it is insensitive to its depictions of rape.

It's different when a scene is so exaggerated that they can't subconsciously feel like a part of our reality: Robb Stark (Richard Madden) and an entire army getting slaughtered at a wedding, or Oberyn Martell (Pedro Pascal) having his skull crushed at the hands of The Mountain (Hafthór Júlíus Björnsson) are unforgettable moments. But you're likely never going to think, "This could happen to me too."

Rape, meanwhile, is a very serious reality. In the U.S., one in five women and one in 71 men will be raped in their lives, according to the National Sexual Violence Resource Center. Using it as a plot device — and for gratuitous shock value — is indicative of a show that is either unaware of the message portrayed, or privy to it and simply doesn't care.

HBO has no more excuses to fall back on for the sixth season of Game of Thrones. It's one of the best shows on modern television, and with it moving past the novels, this new territory comes with exciting opportunities for the overarching narrative. What this shouldn't include, are sequences of sexual violence that do nothing to further the plot or its characters. If they do, their message with rape in the previous five seasons becomes abundantly clear.