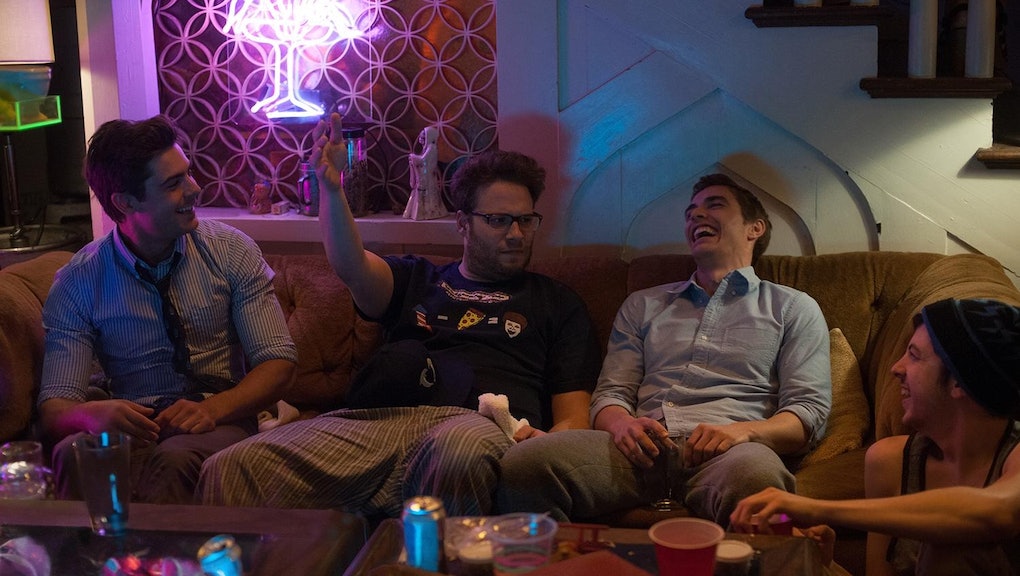 America's infatuation with the '80s has turned into a full-fledged love affair with the historic '90s. That's right: The '90s are back and (arguably) better than ever. Those yearning for Full House have Fuller House, Adam Sandler is back and still making the same jokes he made in 1992 and American Crime Story: The People vs. O.J. Simpson gives America a refresher that O.J. Simpson probably killed two people even though he super-duper-pinky-swore that he didn't.

But not every part of the '90s deserves to come back (remember JNCO jeans and mullets?). One leftover remnant of the storied decade that should die once and for all is the man cave: the manly man's "absolutely necessary" corner of the house adorned with cheap electronics and light-up beer signs.

The man cave one belonged on the wish list of young boys out there who wanted to grow up to be beer-guzzling tough guys, but it's now a played-out, out-of-touch, uncool relic. Here's why.

To start... what in the name of hell is a man cave? The first instance of the word in print is thought to come in 1992 from the book Men Are From Mars, Women Are From Venus. It is a decked-out space where men hang out to be "men." There are typically shiny gadgets, a bar, a light-up beer sign, any number of cigars and — of course — a huge TV.

Guys like Tim Allen promoted and perpetuated it and stopped at nothing to drill the fact into guys' heads they needed this in every house and apartment.

One shining example of Allen's work came from his hit sitcom Home Improvement. One scene involved an abomination called the "man's bathroom." It was made of steel, featured a multi-head shower, heat lamps, a reclining toilet, jukebox, refrigerator, freezer and TV. This tapped into the more ridiculous side of the male psyche, but is rooted in reality.

But Tim "The Toolman" Taylor was hardly the first man cave dweller: Mark Twain had his own version of Allen's wet dream, complete with leather chairs and an incredible view, as described in an 1874 letter to William Dean Howells:

It is the loveliest study you ever saw... octagonal with a peaked roof, each face filled with a spacious window... perched in complete isolation on the top of an elevation that commands leagues of valley and city and retreating ranges of distant blue hills.

So, if the man cave seems so luxurious and conducive to manliness, then why is it dead? The man cave speaks to a level of manliness that is largely on the decline. The cave bred the type of man who objectifies women, mindlessly guzzles the lightest of beers and jumps at the chance to smash the face of a foe in with his fist. This type of man has become a relic of a different time and has been replaced with a kinder, more understanding kind of man.

Chauntelle Tibbals, author of the 2015 book Exposure: A Sociologist Explores Sex, Society, and Adult Entertainment, agrees that men have changed over the years. "One core mission of feminism has always been to liberalize gender expression for all humans," Tibbals said in an email. "And in recent years, the narrative has really taken ahold in very public, mainstream spaces, impacting the ways we think about femininities and masculinities on a wider social level.

"Consequently, though antiquated trappings of hegemonic masculinity certainly still exist and impact people (and though new ones have certainly emerged), what we are seeing more and more of is space for masculinity to mean something other/more than the artifacts collected and displayed in one's 'man cave.'"

Take guys from Prince to James Franco to Jaden Smith, all of whom have expanded the traditional definition of masculinity through their art, their clothing and in conversations. "I'm not a woman. I'm not a man. I'm something you will never understand," Prince once said.

Growing up helps: I'm a product of growing up in the '90s and occasionally still yearn for the man cave I was promised through movies and television. I wanted the room from Hey Arnold!, a room with a view that turned into a full-blown speaker system with the push of a button.

Then, I just kind of grew up.

When I was 26, I moved into a 400-square-foot apartment with my girlfriend, and with that, the notion of a man cave — or even a separate space for me to unwind — went out our comically small window. Then, after a week in a small space with a nice woman, it became shockingly clear the man cave doesn't have to exist for guys to flourish. I didn't yearn for any of the niceties you would have expected in Teddy Roosevelt's office. I didn't need a leather chair or a vintage ashtray made of baby elephant bones. What happened in those first few weeks of cohabitation was a significant change in the way I lived as compared to the way I was alone.

My girlfriend and I decorated together and combined our tastes to make the apartment a place where we could both unwind, relax and do nothing. When I want time for myself, I simply walk into another room and open a book or look at my phone. I don't need to be surrounded by animal hides to make it work.

Read more: An Ode to Being a Slob, Adulthood and Instagram Be Damned

I'm all for people getting their own space — lord knows I can't start my next great American classic while my girlfriend is watching House Hunters, nor can she adequately concentrate on her work while I'm... sigh... watching House Hunters International. The man cave should be a human cave, fit for any gender and devoid of the type of energy that makes women — or anyone — think they shouldn't be in the room all together.

Forget the classic stereotypes and tropes and look to a future where a man can walk into any room and continue being a man. Furthermore, let that man's manliness reflect a 2016-style manliness, in which the tired ideals of yesteryear are fully retired.