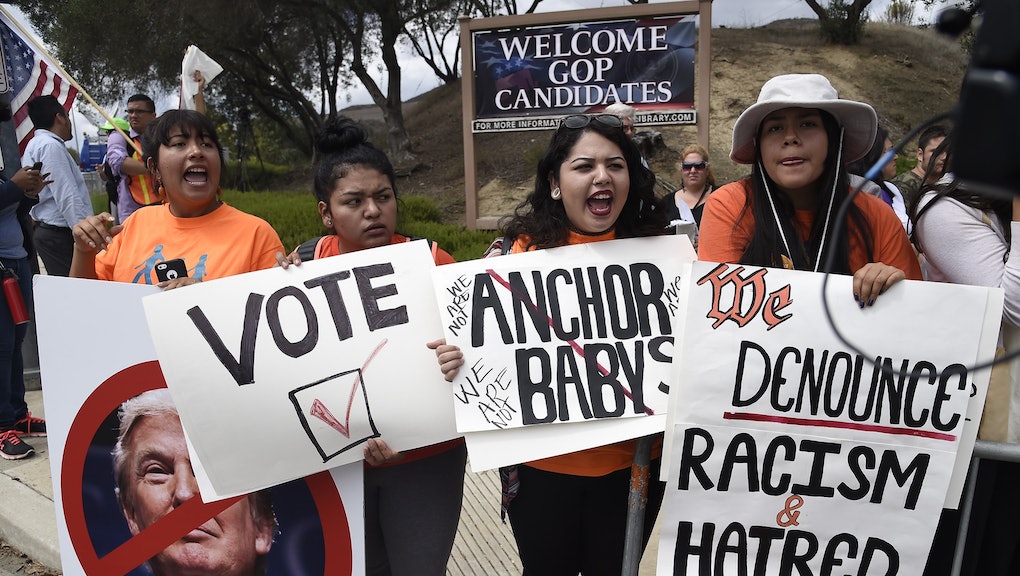 A new survey found that 41% of Latino voters say they are motivated to vote in the 2016 election just to "stop Trump" and fight his anti-immigrant/Latino rhetoric.

Political opinion research group Latino Decisions recently published a survey of 2,200 registered Latino voters about the 2016 presidential election. On a scale of 1 to 10, with "1" being the most anti-immigrant someone could be, 71% of respondents gave Republican presidential candidate Donald Trump a 1.

Trump's rhetoric has fueled more than just racist hate: 48% of respondents said they were "more enthusiastic about voting in 2016" than they were in 2012.

Latinos don't only despise Trump — he's also causing a large majority of those surveyed to run away from the Republican Party.

Of those surveyed, 87% held either unfavorable or very unfavorable views of him, while 78% also said they were "somewhat less" or "much less" likely to vote Republican in the fall.

Sen. Ted Cruz did not get much love, either.

Overall, 52% of Latinos held either "unfavorable" or "very unfavorable" views of the Texas senator. Cruz's shaky ground with Latinos was evident during his campaign stop in the Bronx before the April 19 New York primary, when residents booed him and told him to "Get out of the Bronx!"

While Trump's rhetoric is fueling many Latinos to vote, it's also fueling immigrants to get naturalized — so they can vote against him.

According to the New York Times, fed-up Latino immigrants are registering to become citizens to help block Trump's chances of entering the White House. Given that there are a record number of Latinos — almost half of which are millennials — voting this election, things don't look good for the Donald with this voting bloc.