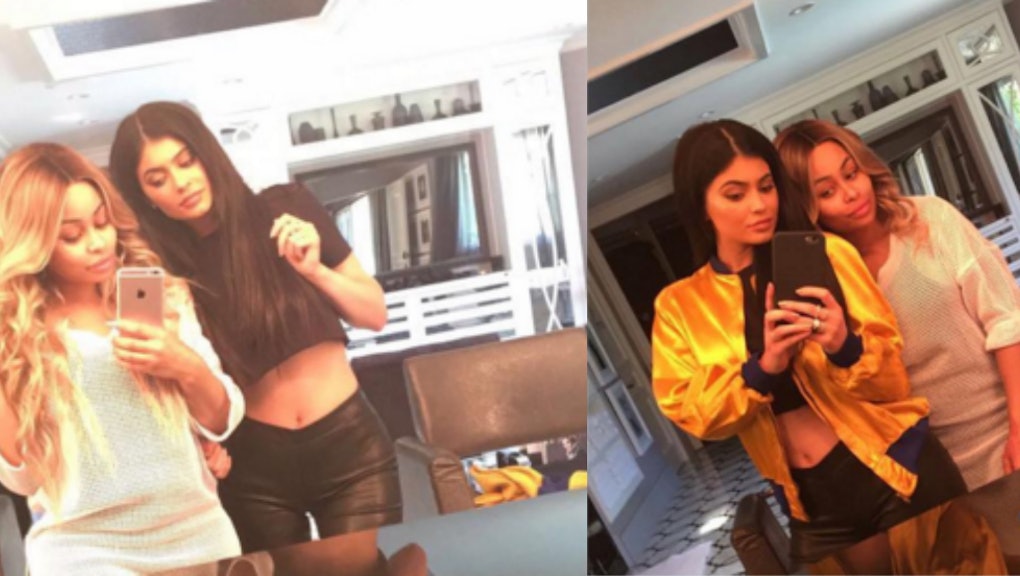 Kylie Jenner and Blac Chyna Say They've Been Trolling Us, Were Actually BFFs All Along

The past few weeks of Kardashian-Chyna-Jenner relations have been fraught with controversy.

After rare male Kardashian Rob Kardashian got engaged to eyelash magnate Blac Chyna, the internet ran amuck with reports of drama. Blac Chyna's status as the ex-GF and baby mama of Kylie Jenner's current beau Tyga made for an irresistibly juicy plot line.

Given Chyna and Jenner's rich history of shading each other, most people figured Kylie would be very pissed off at the news of her brother's engagement. But now a wrench has been thrown into the Jenner-Chyna shade narrative. On Thursday, the two women posed together for a pair of mirror selfies on Snapchat.

"Who? Us?" their faces appear to be saying. "A complicated interfamilial web of relationship drama and lies? Lol. No way! We are BFFs. Because hos before bros, and all that stuff."

The decision for these two seemingly feuding women to take BFF mirror selfies together may seem puzzling at first glance.

But here's a likely theory:

Amber Rose and Kim Kardashian West told them to do it. Rose and Chyna are close personal friends. Kardashian West and Jenner are sisters. Just like Chyna and Jenner, Rose and Kardashian West have a dick in common. Amber and Kim took their own infamous beef-rumor-squashing tea selfie just two months ago. It was a watershed "chicks before dicks" moment.

"It worked for us!" one imagines Kardashian West and Rose told Chyna and Jenner when the foursome got together in a conference room to workshop social media publicity stunts earlier in the week.

"All you have to do is take pics together, OK? And then you each post them to your own separate accounts. Try to make the captions, like, vague. But also with a clear 'no drama' subtext. When it comes to choosing a filter, just follow your heart. Then send it off into the world and watch thousands of content creators on the internet write about it!"

Oh, those anti-slut-shaming witches. They wield such power.