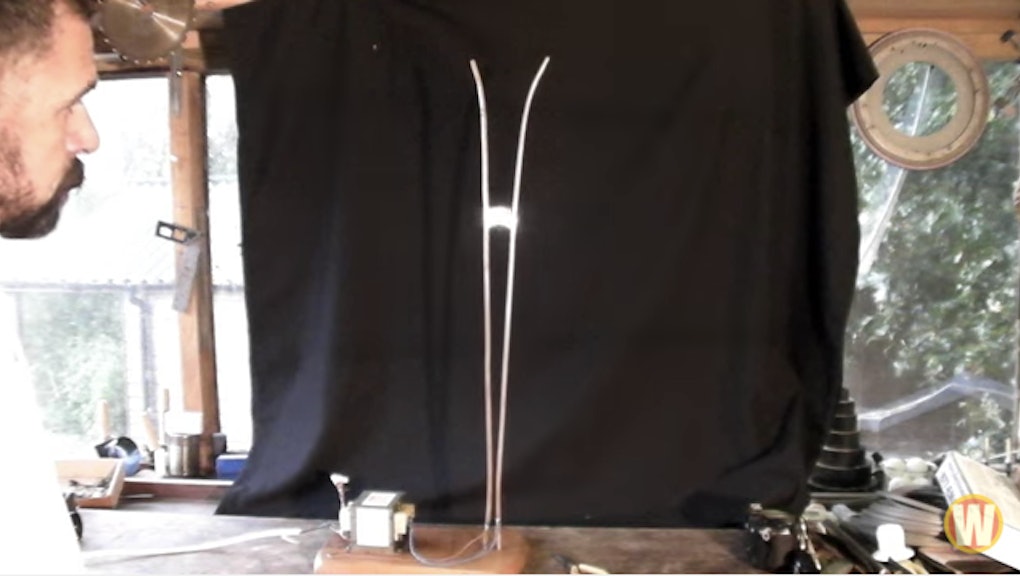 A 15-year-old boy in Ohio electrocuted himself while attempting a science experiment he saw on YouTube, Reuters reported.

The teenager, Morgan Wojciechowski, tried to conduct a high-voltage experiment, called Jacob's Ladder, in the garage of his home in northern Ohio. Wojciechowski's parents found him there on Tuesday, ABC News reported, and emergency crews took him to the hospital, where he was pronounced dead.

The Jacob's Ladder experiment uses a high-voltage power source to send an electric arc shooting up two wires, according to Cleveland 19 News. The result looks like some futuristic alien antennae.

Chief deputy with the Erie County Sheriff's Office Jared Oliver said that authorities found supplies in the garage required for the Jacob's Ladder experiment — a microwave-oven battery pack, extension cords, jumper cables and two pieces of wire, according to ABC News. Wojciechowski wasn't conducting the experiment for a school project: "He was doing this on his own," Oliver said.

Wojciechowski's obituary cites his "passion for science and computers."

A dangerous experiment: DIY instructions for Jacob's Ladder are readily available online. In a YouTube video with over 60,000 views on how to make a Jacob's Ladder, the uploader includes a disclaimer:

"Make sure you understand the dangers involved. A standard microwave oven transformer (MOT) will output several thousand volts with a current high enough to kill you. Only attempt this if you know what you're doing with high voltage equipment."

The video now has a stream of comments from users who found it after they learned about the cause of Wojciechowski's death.

While this video does include a warning, it is still a feasible feat for a teen to attempt this experiment at home. All of the supplies needed to perform this potentially deadly science experiment are easily accessible: an old microwave oven and some copper wire. You can buy a microwave oven on eBay for about $30 and copper wire for under $20. With less than 50 bucks and access to Wi-Fi, anyone could pull up a tutorial and try this experiment at home, as Wojciechowski did.

No warning: Unlike the first YouTube video for Jacob's Ladder I found, there are many others out there with no information about the dangers of this experiment. It hasn't been disclosed which YouTube tutorial Wojciechowski attempted, but one thing is certain: It's easy to find a Jacob's Ladder tutorial on the internet, and it might not tell you you can die from making it.

For example, this YouTube video showing a Jacob's Ladder science experiment has no text and no warning and allegedly creates 12,000 volts of electricity — enough to throw an adult man about 10 feet and send him to the hospital.

On behalf of Vermilion Schools we would like the greater community to know that we are brokenhearted about this tragic loss to our school community. Morgan was a vibrant student and athlete who was well liked at Vermilion High School. Our thoughts and prayers are with Morgan's family, and we continue to be available for anything they need.