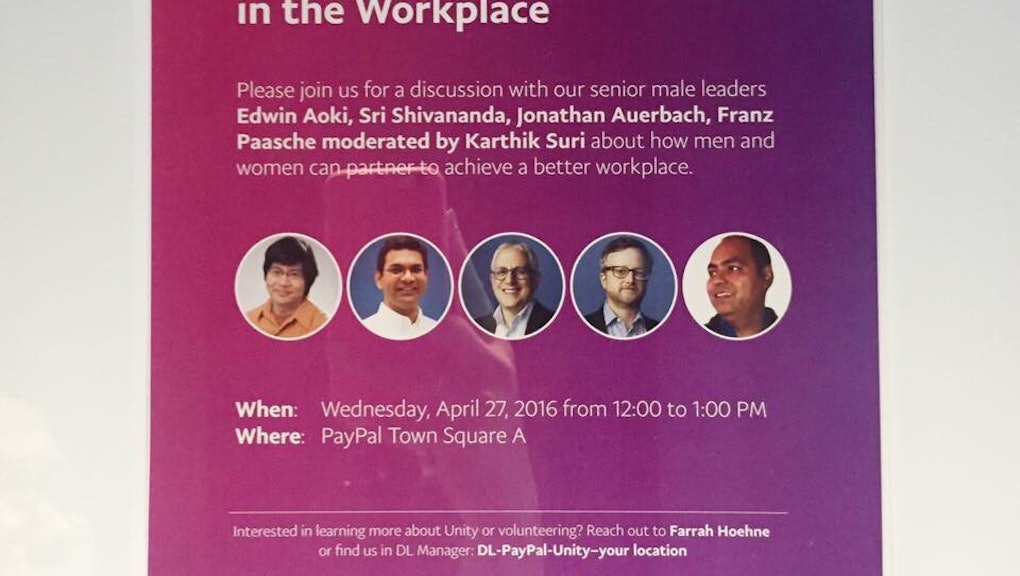 PayPal's Panel on Gender Inclusion Didn't Plan to Include Any Women

In the most grand illustration of mansplaining, PayPal planned an entirely male panel on gender equality and inclusion in the workplace.

The poster for the event reads, "Please join us for a discussion with our senior male leaders Edwin Aoki, Sri Shivananda, Jonathan Auerbach, Franz Paasche moderated by Karthik Suri about how men and women can partner to achieve a better workplace."

The tech industry has been lambasted for its lack of women. Facebook, Google, Apple and Twitter have all publicly released diversity reports revealing roughly a third of all staff to be women. An even smaller percentage of women occupy leadership roles. It's not just that there aren't enough women, it's that women are saying they're not being treated fairly. The last few years have been rife with discrimination lawsuits against Silicon Valley giants like Twitter, Facebook, Microsoft and venture capital firm Kleiner Perkins Caufield & Byers.

A change of heart: PayPal's head of inclusion, LaFawn Bailey, said in a statement on Thursday night that the all-male panel was designed to discuss the role that men play in advancing gender equality. But, she added, "In light of the feedback we've received, we have also asked the president of our women's Unity group and the event host, Nolwenn Godard, to moderate the panel discussion."

Indeed men do play a role in achieving gender equality. But, perhaps a panel discussion isn't the right format for hearing men's experiences with balancing the gender divide. When you host a panel about gender equality only featuring "senior male leaders" you are already failing to demonstrate equality.

Show women they matter: Here's the thing about equality in general: Equal representation is a big piece of it. When you host a panel inviting employees to a conversation with senior leadership on making the workplace more hospitable to both genders, its a good idea to show that women are seen as leaders, too.

When we talk about Silicon Valley or the tech industry at large not having enough women, it's not just about hiring more women. It's about committing to offering women the same opportunities as men. A panel of all-male management does not signify such a commitment.

Next time, try a roundtable. Or what do I know, I'm just a woman.