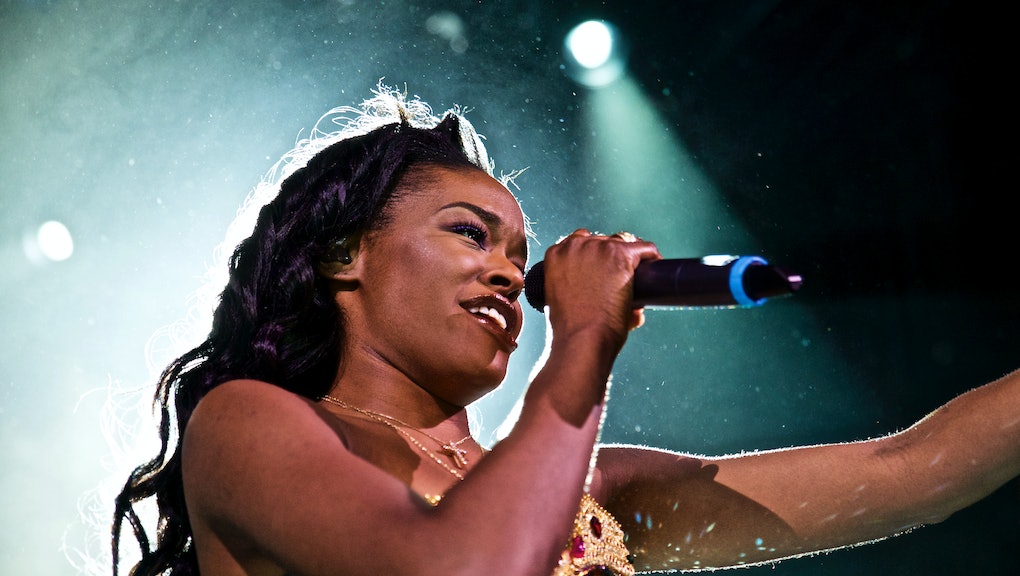 The night began with entrepreneur and hair stylist Elgin Charles telling Azealia Banks to "let success be your shade" and to stop tweeting so much and get into the studio. Though Banks has released several mixtapes and a debut album, she is known for her high-profile Twitter beefs just as much as her lyrics.

However, the Blaze reported, in a since-deleted tweet, Banks called Charles a "dirty black church fag." When she used the word, Mckesson stepped in to ask her to check her language.

Azealia defended her use of the word, as she has in past beefs over the controversial gay slur.

Though DeRay seemed to end the back-and-forth peacefully, Banks was not satisfied and requested that DeRay return her donation to his political campaign.

Banks did not wish Mckesson well back.

When another user tweeted Banks in support, he pointed out that Mckesson chose to call out Banks, a queer black woman, rather than other people who have used offensive language. In response, Banks called Mckesson a "house nigger," a pejorative term used to describe a black person who would be allowed to work inside the house during the time of slavery in the United States.

After Mckesson and Banks finished tweeting each other, Banks spent the rest of the night retweeting people who supported her and broadcast an impromptu 17-minute Periscope. In the video, Banks called out black fans who were mad at her for her use of the word "f*ggot" and not the word "n*gger", and said she had never heard a good argument yet as to why she can't use "f*ggot."

"As an artist and as a songwriter, as a lyricist, I use many, many words colloquially: bitch, cunt, nigger, faggot. All these different words that I just use however I see fit. Because, as an artist, I have just a real colorful way with words and I like to get my point across even if it means that I have to use a word not in its, I guess, learned sense. Not in the sense that everyone knows it to be," she said.