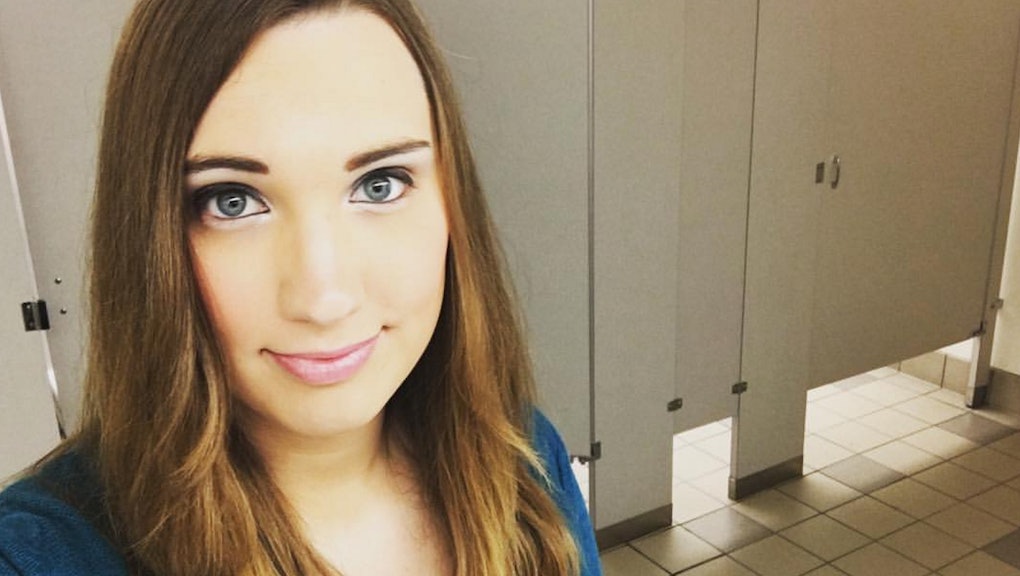 It's time to take away the stigma of transgender people in bathrooms — but first, let me take a selfie.

Because of the stigma of being transgender, there are plenty of spaces that are not the safest for transgender people to be. One of those places is a North Carolina bathroom. However, that didn't stop 25-year-old Sarah McBride from not only entering a woman's bathroom, the bathroom that matches her gender identity, but also taking a selfie and penning some beautiful words to go along with it on her Instagram.

Here I am using a women's restroom in North Carolina that I'm technically barred from being in.

As part of her job at the Center for American Progress, McBride was gathering stories from transgender North Carolinians affected by the passage of HB2, a state law that requires that people use the bathroom that matches their gender assigned at birth, not their gender identity. While in North Carolina, McBride decided to take the law-challenging selfie, BuzzFeed reported.

Later in McBride's post, she wrote, "I'm just a person. We are all just people. Trying to pee in peace. Trying to live our lives as fully and authentically as possible."

She continued her post by saying that barring her from a public restroom helps no one and that allowing her to use the bathroom wouldn't cause any harm, either. Statistics stand on McBride's side — there are zero reported instances of a trans person ever attacking someone in a bathroom.

Since she posted the selfie on Facebook on Thursday, it has already garnered over 45,000 reactions and more than 17,000 shares. Many commenters, transgender and cisgender, have stood with McBride in solidarity.

McBride closed her post with a simple plea: "Stop this. We are good people. #repealHB2," she wrote.