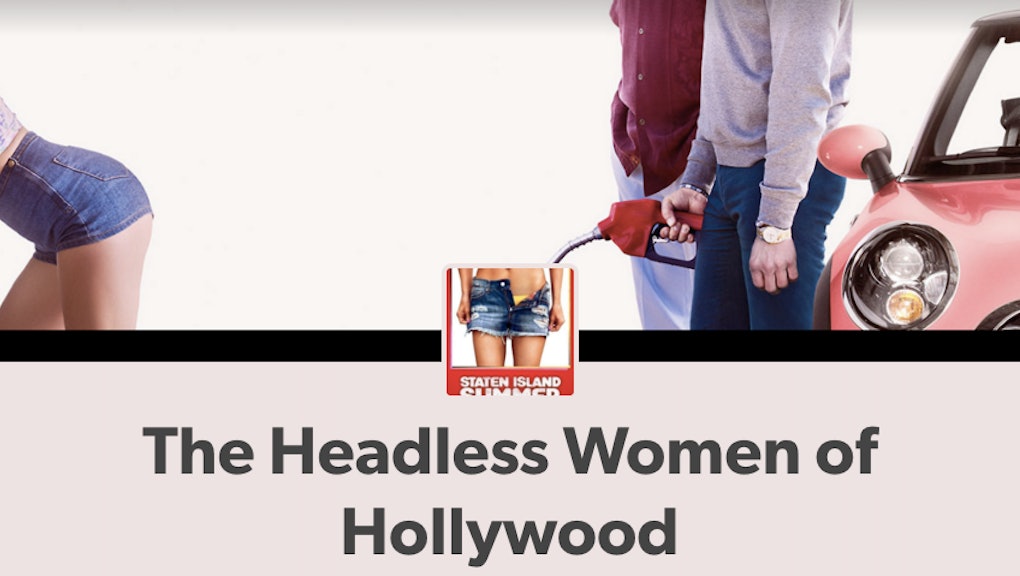 When New York stand-up comic Marcia Belsky noticed a disturbing trend among popular movie posters, she decided to make an entire website dedicated to making other people notice it too. On that website, she summarizes her specific complaint thusly: "DAMNIT, HOLLYWOOD!!! WE WANT HEADS!!!!!!!!!!!!!!!!!"

Belsky's comment is in reference to the dearth of Hollywood movie posters that include females' heads and faces: you know, the combination of eyes, lips and noses that usually signify to us that something is human.

What can be found instead is a huge number of posters that feature only "parts" of women, like legs, butts or boobs.

A statement on the "about" page of the Headless Women Project's Tumblr explains why the objectification of women and the reduction of them to mere body parts is a particularly egregious cultural signifier:

By decapitating the woman, she becomes an unquestionably passive object to the male gaze. The question of her consent is removed completely alongside her head, and her purpose becomes solely that of being looked at by men obediently. Her value is that only of her sexual appeal to men, and not of her personhood.

Belsky's Tumblr and its accompanying Twitter account both exist to call out the offending posters, and luckily for her (and unluckily for all of us), there's no shortage of fresh examples.

In a recent interview with HelloGiggles, Belsky said the sheer abundance of the reductive imagery is what prompted her to begin highlighting it in the first place.

"What mostly inspired the project was a combination of things I learned in school about the consistent fragmentation and objectification of women's bodies, and then the frustration of still seeing these images of headless women everywhere," she said.

Though Hollywood is notoriously slow to make changes to its regressive practices, at least we have Marcia Belsky to help us laugh at them while we wait.