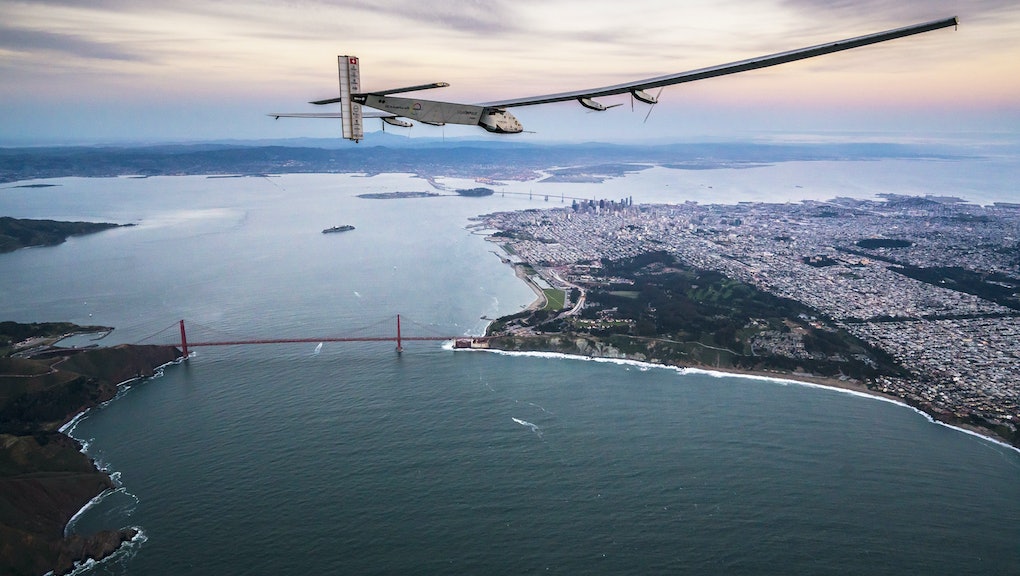 A solar-powered plane touched down in Silicon Valley Saturday night, marking the end of a nonstop flight from Hawaii without the use of any fuel.

The plane, called Solar Impulse 2, is a project 16 years in the making. Swiss pilots Bertrand Piccard, an explorer, and Andre Borschberg, an engineer, have taken turns handling the plane ever since it embarked upon a journey around the world, which began in Abu Dhabi in March 2015.

The plane's flight from Hawaii to San Francisco took nearly 2 1/2 days, since the carbon-fiber aircraft can only fly at about 28 mph. Flight speed can increase and nearly double during times when the sun's rays are stronger, however.

"It's a new era. It's not science-fiction. It's today," Piccard told CNN after the safe landing. "It exists and clean technologies can do the impossible."

The plane is an experimental project meant to bring attention to the importance of clean energy use in commercial airfare.

Though solar airplanes currently remain an impractical option for public travel, due to their high cost of production and long flight times, Piccard is confident the future of flight involves clean energy.

"The flight for me was the accomplishment of this vision, this dream I had. ... We can prove the credibility and reliability of these clean technologies and renewable energies," he told CNN.

Piccard called the plane's safe flight 'a miracle of technology,' and speculated that future generations might remember the moment as a pivotal turning point in the movement toward sustainable commercial air travel.

"Maybe it will be boring in 20 years when all the airplanes will be electric and people will say, 'Oh it's routine.' But now, today, an airplane that is electric, with electric engines, that produces its own energy with the sun, it can never be boring," he told the Associated Press.

Because the plane is powered by the sun, there are no limits to how long it can stay in the air — aside from the limits of the human pilots powering it.