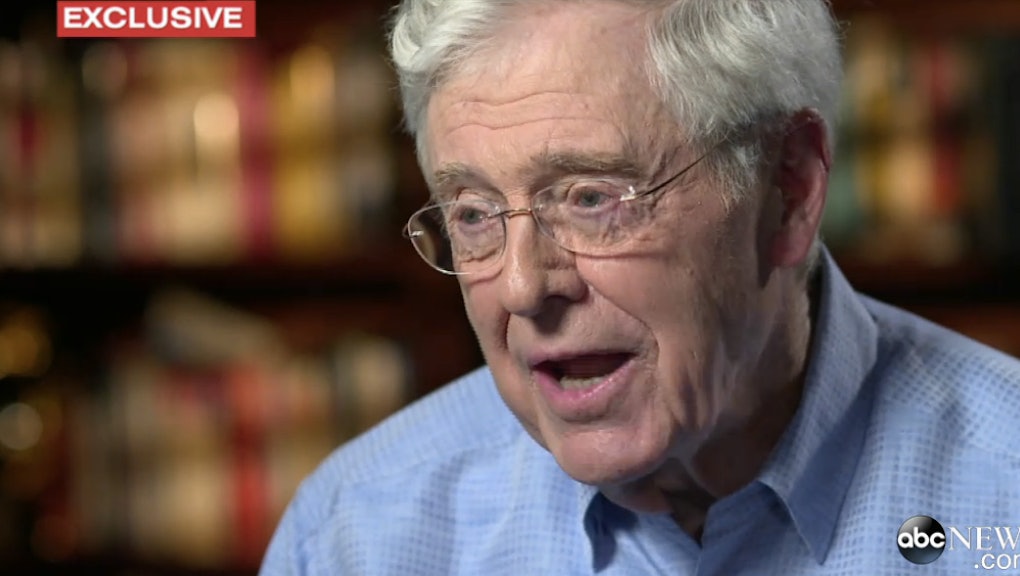 Charles Koch isn't denying that Hillary Clinton might make a better president than any of the Republicans in the running.

During an interview with Jonathan Karl on ABC News' This Week set to air Sunday evening, the billionaire conservative donor said that while Bill Clinton "wasn't an exemplar" in some ways, in other ways his presidency was better than that of George W. Bush

"As far as the growth of government, the increase in spending, it was two-and-a-half times [more] under Bush than it was under Clinton," Koch said.

Pressed on whether another Clinton in the White House might be better than a Republican this time around, Koch replied, "It's possible."

When Karl asks, seemingly surprised, "You couldn't see yourself supporting Hillary Clinton, could you?" Koch doesn't directly rule out the possibility. "We would have to believe her actions would have to be quite different than her rhetoric, let me put it that way," he said.

In another clip from the interview, Koch, one of the most influential conservative donors in modern politics, called the remaining Republican candidates "terrible role models" and told ABC that his sprawling political network had no reason to support any of them in the 2016 election.

"These personal attacks and pitting one person against the other — that's the message you're sending the country," he said. "You're role models and you're terrible role models. So how — I don't know how we could support 'em."

Read more: Did Laura Bush Just Say She'd Rather Vote for Hillary Clinton Than for Any GOP Candidate?