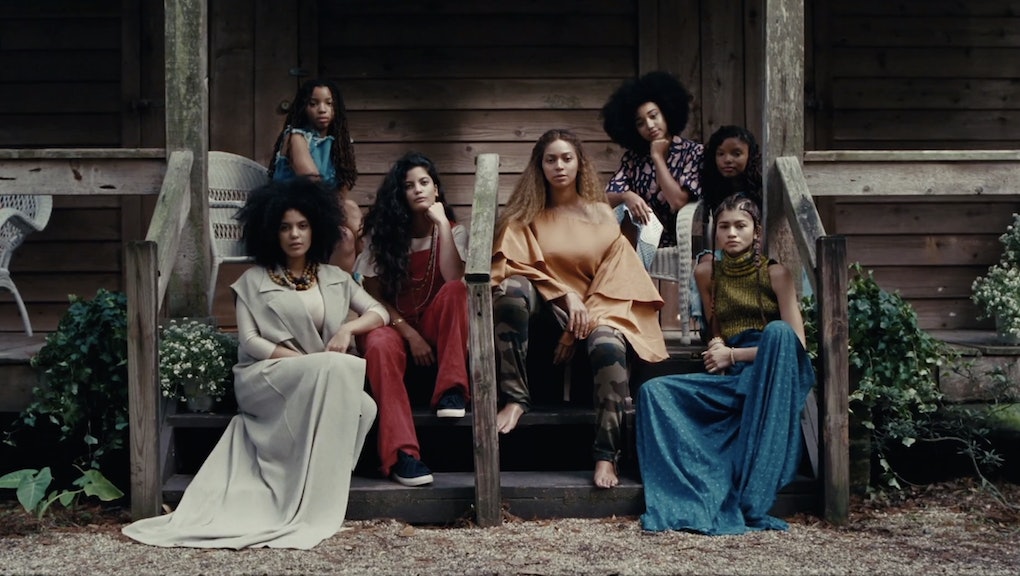 With 'Lemonade,' Beyoncé Has Already Secured 2016's Album of the Year

There were rumblings that Beyoncé was building something monumental to top her 2013 critical success, Beyoncé. To match a work that completely remade the music industry's century-old release practices and further fragmented the boundary between high- and low-brow pop, nothing short of the Hagia Sofia or the Pyramids of Giza would do. Yet nobody could have possibly predicted the majesty of the opus Beyoncé unleashed Saturday night.

In a single hour, Beyoncé's Lemonade rewrote the textbook definition of what a visual album should look like. The genre-bending music it introduced will define the struggles a generation was enduring in 2016, specifically for black women. The project transcends every definition pop has ever had; blending R&B, contemporary rock, country, reggae, soul and hip-hop in its 12 tracks, occasionally fusing several of these into a single song.

The carefully curated album incorporating the likes of Led Zeppelin, Malcolm X and Warsan Shire, Lemonade floored Beyoncé's fans around the world, and the voice behind the music became a living legend in the process.

Lemonade is a call to action. Beyoncé's music has been politically engaged for some time now, but with Lemonade she's transitioned into a full-blown revolutionary. The album marks Beyoncé's loudest call-to-action for women's liberation around the world. Her songs call on women to step into formation and shed any and all restraints that confine them: from the microaggressions stemming from Eurocentric beauty standards to economic disempowerment to toxic relationships.

The themes are captured perfectly in the album's visual form. Lemonade's chapters blend Native American, African, western, southern and European influences to create a haunting land in which women of creeds and colors are lining up, standing together and demanding recognition. The mothers of slain black children like Trayvon Marton, Michael Brown and Eric Garner hold photos of their sons, crying as Beyoncé and James Blake sing, "It's time to listen, it's time to fight, forward. ... Go back to your sleep in your favorite spot just next to me."

These visual themes carry into the sonic realm as well. Kendrick Lamar, who boasts the album's only rapped verse, comes out blazing in "Freedom," with bars seemingly addressed to these mothers seen in "Forward." "Mama don't cry for me, ride for me," he raps. "Try for me, live for me, breathe for me, sing for me."

The whole album Lemonade will come as a relief to the pop world, which has been patiently waiting throughout Beyoncé's career for her to release an album that feels this whole. The fact she's managed to do so while bringing together some of the industry's most celebrated and diverse egos — from Kendrick to Diplo, James Blake, Vampire Weekend's Ezra Koenig, Boots, the Weeknd, the Dream and MeLo-X — is nothing short of miraculous.

Beyoncé continues to prove not only her vocal adroitness throughout Lemonade, with ballads like "Sandcastles" and "Pray You Catch Me," but her ability to perfect each genre she explores. Rihanna's attempts at contemporary reggae on her past works and Anti, including "Man Down" and "Work," pale in comparison to the talent and effortless flow found in "Hold Up."

In "Love Drought" and "Sorry," Beyoncé's message to pop music is clear: do better. Meanwhile, Adele, whose record-breaking 25 once seemed a shoe-in album of the year, is likely shaking in her boots — with either more fangirl glee or fear for her album's legacy.

The other layers of Beyoncé's artistry, diversity and symbolism throughout Lemonade will continue to be explored over the coming weeks. It feels like a project that will have major consequences for the industry into which it was birthed. Its mystery special on HBO will have artists rethinking all their drops. It's exclusivity on Tidal (which as of now is "indefinite") seems better poised to change the way we discuss exclusive streams than Kanye West's The Life of Pablo, Rihanna's Anti or any album that's made such a claim in the past.

But, moreover, Beyoncé's sixth studio album has the potential to effect genuine change in the way pop listeners approach big concepts. Few pop albums in recent memory have ever had such damning things to say about liberation, individual agency and the way society encourages or discourages the two.

Will listeners demand more? Will artists oblige? What happens now that the long-awaited Lemonade has been served, only the queen may know.