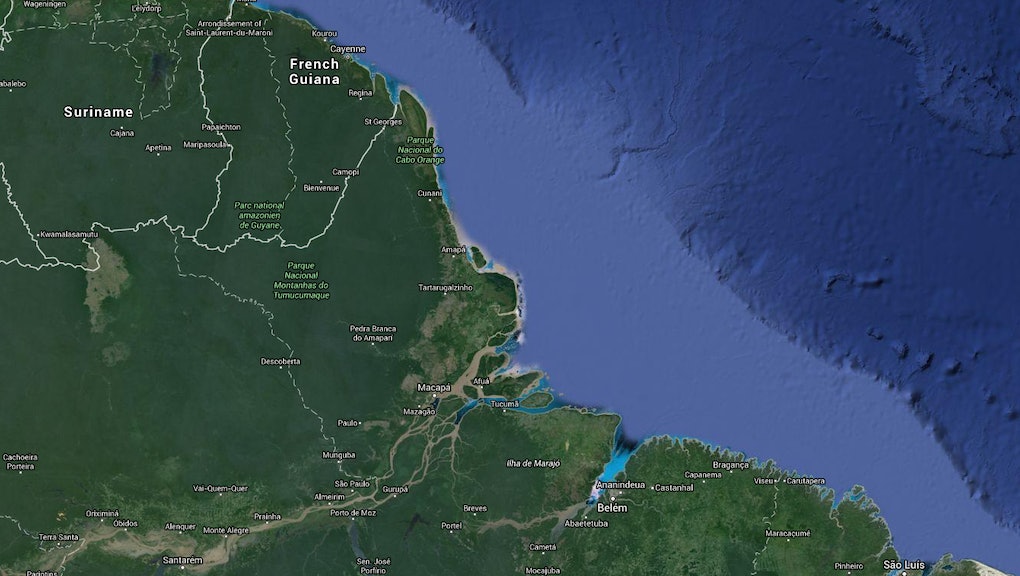 Scientists have discovered a massive, 3,600-square-mile and heretofore unknown coral reef system at the mouth of the Amazon River, the Guardian reported Friday.

The 600-mile coral formation "ranges from about 30 to 120 meters deep and stretches from French Guiana to Brazil's Maranha?o state," according to the Guardian, and researchers, oil companies and governments are scrambling to explore it. According to initial results published in Science Advances, the site is "impoverished" but boasts impressive biodiversity.

The reef system escaped detection due to the Amazon's muddy outflow, which is visible from space and clouds the waters. However, that same freshwater outflow gave life to the reef.

"Coral reefs usually don't thrive in muddy waters, like the mouth of the world's largest river, but the Amazon has a freshwater outflow," reported NPR's Catherine Osborn. "It appears to have produced a reef with over 60 species of sponges and 73 species of fish, spiny lobsters, sea stars and other ocean life. The reef stretches from the coast of French Guiana to Brazil's Maranhão state."

Twenty-nine of those sponges are suspected to be newly discovered species, the Smithsonian reported, and just 10% of the reef has been explored.

Read more: 93% of the Great Barrier Reef Has Been Damaged By Coral Bleaching, May Devastate Reef Life

However, the reef faces challenges from both long-term threats like climate change and acidification and immediate ones like oil drilling.

"We brought up the most amazing and colorful animals I had ever seen on an expedition," University of Georgia associate professor Patricia Yager told CNN.

"The Brazilian government has sold 80 blocks for oil exploration and drilling at the mouth of the Amazon and 20 of these are already producing oil — some, it is thought, right on top of the reef," the Guardian reported.