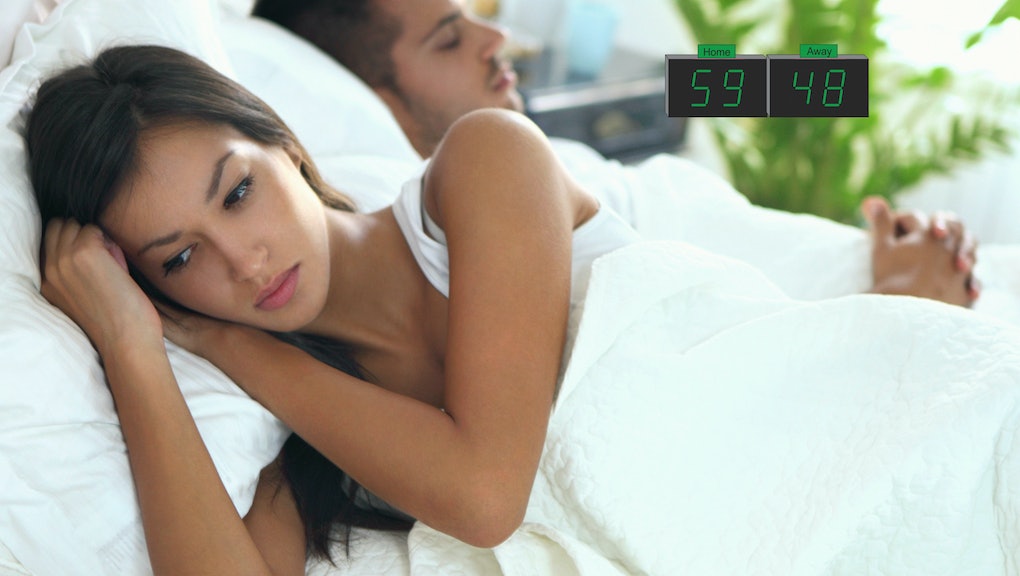 There's One Way to Close the Orgasm Gap, Once and For All

Imagine you had Venmo, but instead of settling a Time Warner Cable bill or Buffalo wing tab, you calculated how many orgasms you and your last sex partner owed each other. Would you have "paid" as much as you "charged" through every sweaty hookup, long-term relationship or late-night maintenance sex?

On average, only 57% of women are having orgasms most or every time they have sex. The National Survey of Sexual Health and Behavior found that while 91% of men got off during their last sexual encounter, only 64% of women came. (Seriously, WTF.)

It's an issue that, statistically speaking, is rare among homosexual partners. Same-sex partners are orgasming in far more equal shares: a 2014 survey found that gay men come about 85% of the time while lesbian women get off about 75% of the time. If it's possible to come that consistently, how, pray tell, are straight couples getting it so damn wrong in bed?

People have doled out all sorts of excuses for the orgasm gap. There's the idea that straight women are much less orgasm-prone than straight men (false), that women can't orgasm as fast as men (false) or that female pleasure is more complicated than the electoral college system (so false). The real culprit behind our skewed orgasm ratios isn't complicated vaginas, migratory clits or unicorn-like G-spots — though women can surely seem shortchanged, anatomy-wise — it's the fact that some partners either aren't paying attention or just don't give a shit.

Forget the hubbub around penis size, partner count and how long sex lasts. If you're going to keep one number in mind while you're having sex, it should be your orgasm count.

The empathy gap: "I just know that they come EVERY time and I don't," Michelle*, 28 and single, said in a phone interview with Mic. In Michelle's last relationship, her partner was a major fan of oral sex, but even when she was on the receiving end, it was more for his pleasure than hers.

"In my experience, most guys don't care about making you come," Michelle said. "It is not a requirement. Some are happy to oblige if you ask for it. Some are annoyed at how much work it requires on their part."

It seems that men just aren't willing to do that hard "work" as often as women. In a recent study published in the Canadian Journal of Human Sexuality, 63% of male college students reported receiving oral sex in their last sexual encounter, whereas only 44% of female students reported getting head. While women in the study reported enjoying giving oral sex less than men, they still were giving far more than receiving. That's in line with just about every research study ever done on women's orgasms vs. men's orgasms.

"Some are happy to oblige if you ask for it. Some are annoyed at how much work it requires on their part."

This orgasm gap could "have something to do with the assumptions and gender roles that often get associated with sex," researcher Jessica Wood, who co-authored the study, said in a phone interview. "Sexual scripts are the ideas we have about who does 'what' in sexual interactions and what roles people take on. Traditionally, heterosexual women were placed in the 'passive/submissive' role of the giver, while heterosexual men were placed in the 'dominant' role of the receiver."

It's what New York-based sex educator Kate McCombs calls "the empathy gap" in sex. "Some guys just don't make the effort to make sure their partners are having as much fun as they are," McCombs said in a phone interview. "They might ask, 'Did you come yet?' but won't meaningfully offer to correct the imbalance."

It's not just what we do, it's who we do: Of course, it's not only what you do in bed that determines your likelihood to come, but who you're in bed with in the first place. In fact, women in relationships are more likely to orgasm than those having casual hookups.

"I basically just deleted Tinder for this reason," Erica*, 28 and single, told Mic when asked about her "pathetic" orgasm tally. "I've gone out with about five guys in the last six months on the app. It's always the same: drinks, flirting, then sex. I've had maybe one orgasm out of all the hookups — yeah, one."

Emboldened by her own frustration, Erica asked one of these hookups why he gave up so easily on pleasuring her after about only "three to five" minutes of half-assed fingering, when it takes more foreplay for her to get off. Her partner had told her she seemed "complicated" and that they could maybe "try again another time" — choosing to put the blame on her body rather than put in the effort. "He wasn't even particularly an asshole, it's just these men know they won't see me again, so they're not trying," Erica said. "And unless you're the one to offer first, oral sex is out of the question."

The stunning lack of orgasms can be a common and unwelcome side dish to casual sex for women who enjoy no-strings-attached hookups. "In committed relationships, partners are more invested in ensuring that the person they are having sex with is really enjoying themselves, as their sexual enjoyment can impact their overall relationship satisfaction," Wood explained. "People may not worry about this as much in casual encounters."

Timothy*, 26, admitted as much in an email interview. "I care much less about the number of orgasms my partner has during casual sex. I care less about the person," he said.

Nobody should ask to come: While sex should never be a competition and is about more than just orgasms, keeping the number of orgasms you and your partner have in the same ballpark is crucial. Why? Because male orgasm is the default of sex, but female orgasm still, against all logic, isn't.

"I have never slept with anyone who was interested in keeping count and balancing the numbers," Michelle said, noting that her partners' collective selfishness has been detrimental to her sex life.

"It's sex, not a soccer match where you have to keep score," Nate*, 27 and in a relationship, told Mic when asked about whether he would consider tallying orgasms. Still, Nate admits that he probably has more orgasms in general than his girlfriend — and that may be why he doesn't want to keep score.

There is, however, one way to keep your orgasm tally in the same ballpark without, you know, literally getting out a pen and paper or waiting for someone to ask for an orgasm — just change up the sexual choreography.

"One of the most important habits to break is ending sex automatically after the male partner ejaculates," McCombs, who's heard complaints from female clients, said. "Since most women don't orgasm from intercourse, it's good sexual etiquette to check in with her to see if she'd like to be pleasured in another way. She may not want or need an orgasm, but it should be standard practice to check."

It's not just a problem for the ladies: Of course, paying attention to you and your partner's O quotient is not just essential for female satisfaction, but it can also help out men who find orgasming more difficult.

As for keeping score, Kevin*, 30 and single, ran some calculations after an ex of his liked an article about the orgasm gap on Facebook. "It's pretty ironic that she did. By my most generous estimate, it turns out that she had at least 250 more orgasms or three times as many as I did. The actual number is probably much higher," he said.

"I have difficulty orgasming sometimes due to delayed ejaculation, so I tend to talk about it to let my partners know that it's an issue," Kevin said. "I don't make people feel bad about it, but I also don't stay with unhelpful partners."

"As a male, I think I would be hard-pressed to finding someone who was considerate about [balancing the number of orgasms]. It is my job to be considerate," Timothy, who said his partners, who are multi-orgasmic, have more orgasms than him, said. "I don't think it matters so long as your partner is adequately satisfied."

If you're aware of your partner's needs, no matter if they're longterm or casual, you don't need a literal tally to sexually square-up, you just need to be considerate. "It's almost baffling how being selfish in bed is basically baseline for straight couples," Erica said. "Just some slight generosity, just making sure I come when he comes. ... That's what's going to separate the people I never call again from the people I definitely fuck again."

*Names have been changed so subjects can speak freely about private matters.