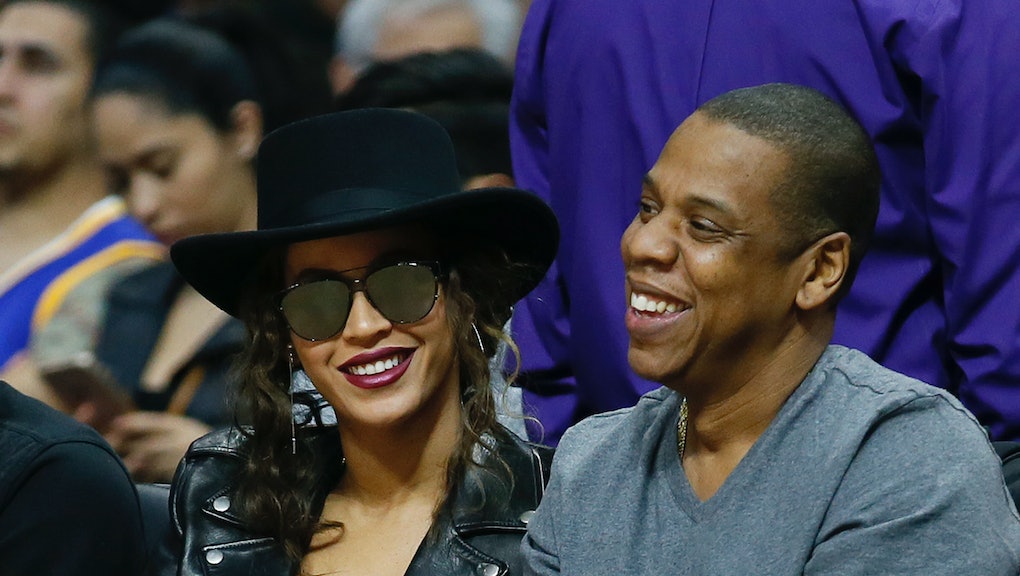 The One Truth About Marriage, Feminism and Fidelity, as Revealed by Beyoncé's 'Lemonade'

Beyoncé's visual album Lemonade is stunning, not only in terms of imagery, but also its breadth: It's about black womanhood and empowerment, pain and tenacity, justice, strength and hope. And yes, it's also about cheating.

In fact, Bey's sixth album is about being cheated on. That much is essentially confirmed from the very first song, "Pray You Catch Me," and the (not exactly light-handed) image with which it ends: Beyoncé spiraling downward off a building, into a body of water, accompanied by voiceover in which she asks, "Are you cheating on me?"

When Lemonade first aired Saturday on HBO, it was at approximately that point — or maybe the one not long after, in which Bey struts down the street beating fire hydrants and police surveillance cameras with a baseball bat — that viewers started asking whether they were watching an announcement of her divorce from Jay Z. By the end of the album (which was initially released on Tidal, the streaming service her husband owns), Beyoncé makes clear she has no intention of calling it quits on her marriage — but that's not to say she, or any other woman who might have been cheated on, didn't think about it.

It seems natural that people would assume (initially, at least) that Lemonade, an apparent proclamation of her husband's infidelity, would be followed by a public split, particularly because we're talking about Beyoncé — one of the most powerful women in the world, a feminist who has championed female empowerment and self-respect. This is an artist who has been notoriously opaque about her personal life, but who has nonetheless been a vocal proponent of marriage (even when it means taking shit for proudly identifying as Mrs. Carter).

More to the point, Bey has also presented herself as being an independent woman, despite being happily committed. The woman who puts "everything you own in a box to the left" can't be the same woman who stays with a cheater, right? Well, her new album forces us to acknowledge that maybe she can.

Lemonade never explicitly states whether Jay Z cheated on Beyoncé or not, but that hardly matters: whether the story is Bey's or drawn from the pain of other women, it deals with the complex feelings that come with cheating in a way that is nuanced and real. A great number of spouses, possibly including Beyoncé's, cheat. A great number of spouses who get cheated on, possibly including Beyoncé, stay with their husbands — and they aren't necessarily wrong to do so.

But that's not how cheating is ever presented. Infidelity is supposed to be a deal-breaker, the sort of behavior that warrants a mailbox full of human feces or, in Beyoncé's case, speculation that she's filing for divorce. That's especially true for empowered women, who aren't supposed to stand by while their partners step out on the side.

Our cultural conception of cheating doesn't leave room for women to be strong and independent and still have husbands who cheat, to have husbands who cheat and still be strong and independent. It's why we still ask, nearly two decades later, why Hillary Clinton stayed with Bill when he went behind her back. Leave it to Queen Bey to give us an answer.

More importantly, leave it to her to give us an answer that illustrates the strength of women — particularly black women — in pain. As Dee Lockett points out at The Cut, Beyoncé's willingness to explore complicated feelings about unfaithfulness is also "a meditation on the way black people love," an acknowledgement that her force, or the force of any other woman, is not diminished by her choice to forgive:

Our love is always political, it has no choice. When it fails, it's a failure for all black lovers. Not even Beyoncé can readily say the words "my husband cheated on me ... and I stayed" because it would destroy the fantasy. Young people, young black people especially, believe so much in their love, even despite all the obvious indiscretions, because it gives them hope that their own will last. It has to last.

Lemonade shows that it can, but it's not always easy. In fact, the struggles that threaten Beyoncé's relationship with Jay Z are the same struggles that threaten anyone's relationship. Infidelity happens in ways big and small all the time, and although it's incredibly common (and maybe even a part of human nature, according to psychologists), it's still a singularly painful experience. The reasons are always different, just as the feelings a betrayed partner might have are inevitably different too.

And Bey is exploring those reasons and feelings in depth: The first half of the album is an explosion of rage and regret, but the second moves past fury to explore forgiveness and redemption. As a whole, it presents a narrative about cheating that's different from the one we've come to expect, but that might be more realistic: Cheating doesn't invariably tear couples apart, nor does it disempower partners — particularly women — who choose to stay.

It would be hard to draw any other conclusion from the myriad bone-chilling images of strength Beyoncé includes in Lemonade, even as they're interlaced with pain. Her power — as she stands in a wedding dress before a bedroom door engulfed in flames, or as she tells her cheating partner to "suck on my balls" — is never in question. But neither is her pain.

That Beyoncé admits her relationship might not be perfect, but is still worth saving anyway, is revolutionary not only for a woman whose public image is all about perfection, but for a culture that doesn't often acknowledge the complexities of cheating. It's also not always a situation where a partner is cuckolded, made a fool or left without agency. It's not always cut and dry, but it's also not the decision of anyone but the partners who are in the relationship.

Lemonade shows two things can so easily be true at once: You can wish to smash your cheating partner's face with a baseball bat and then spend the rest of your life sharing a bed with him; you can want to leave and choose to stay. Neither decision is wrong. Where there is disrespect in a partner choosing not to keep his word, there can be empowerment in choosing to keep yours, anyway.