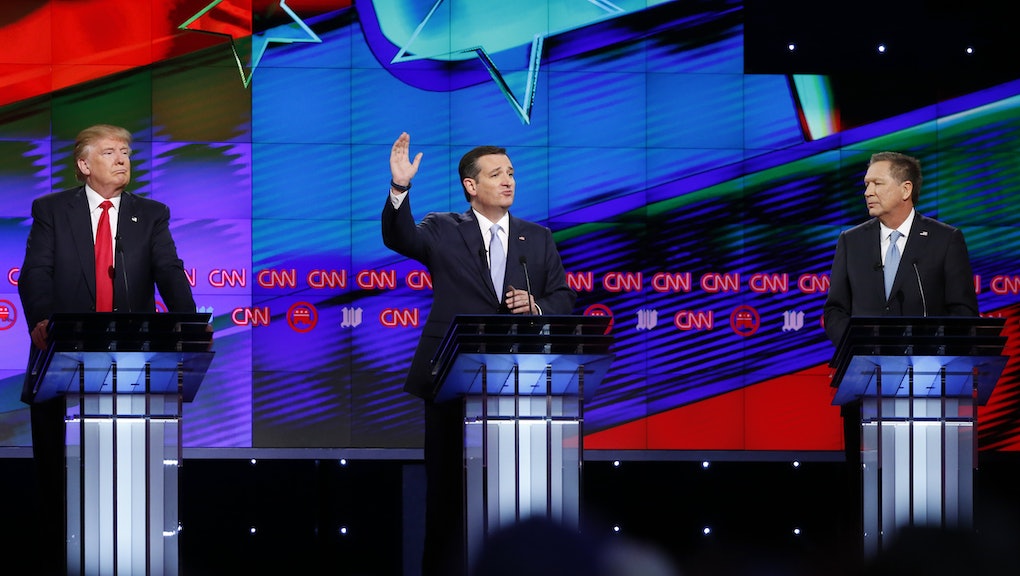 Here's What the Ted Cruz-John Kasich Alliance Means to You

The race for the Republican presidential nomination took a new turn Sunday night, as the campaigns of Ted Cruz and John Kasich announced they would form an alliance to thwart frontrunner Donald Trump in three upcoming primaries, aiming to block the billionaire real estate tycoon from securing the 1,237 delegates required to win the GOP nod.

But how will the alliance actually work?

The agreement: With 15 GOP nominating contests remaining, Cruz and Kasich have reached an understanding pertaining only to three.

Kasich will stand down in Indiana, allowing Cruz to focus his resources on winning the Hoosier State's May 3 primary. Meanwhile, Cruz will clear the path for the Ohio governor to take on Trump in the May 17 Oregon primary and the June 7 New Mexico primary.

The latter two states "are structurally similar to the Northeast politically, where Gov. Kasich is performing well," chief strategist John Weaver said in a statement, adding that Kasich planned to "compete with both the Trump and Cruz campaigns in the remaining primary states" not covered by the agreement.

The numbers: Given that it covers only one-fifth of the remaining nominating contests, the Cruz-Kasich unity pact seems quite limited in scope. But it could make a big difference in the outcome of the GOP race.

To reach the magic 1,237 delegate threshold, Trump must win about 53% of the remaining delegates at stake, so denying him most or all of Indiana's delegation is paramount to the stop-Trump forces.

It's unclear that Cruz will overtake Trump, though. The RealClearPolitics polling average currently gives Trump a slight lead in Indiana, with the frontrunner taking 39% of the vote to the Texas senator's 33%. Kasich lags far behind at 19%.

Kasich's decision to effectively concede the state may help Cruz close the gap, but Kasich's name will still appear on the Indiana ballot (in either a momentary lapse or the first sign that the alliance may be unraveling, Kasich said Monday that his Indiana supporters should vote for him), and Trump's momentum coming out of his expected victories in the five April 26 primaries could further complicate Cruz's path to victory.

In the states where Kasich will effectively go mano-a-mano with Trump, there are only 52 delegates at stake — 28 in Oregon, and 24 in New Mexico. In a contest where every last delegate matters, those numbers are nothing to sniff at — but given that both states will award their delegates proportionally, the anti-Trump movement would only gain limited traction from successes there.

Trump's foes could effectively knock him off by overtaking him in the June 7 California primary, in which 172 delegates will be awarded. But recent surveys show Trump growing his lead there, with the RealClearPolitics polling average showing him at 44% to Cruz's 29% and Kasich's 18%. Trump may be more vulnerable in a head-to-head race in the Golden State, but with the Cruz and Kasich camps vowing to compete in each of the states not covered by their new unity pact, that scenario is unlikely to come to pass.