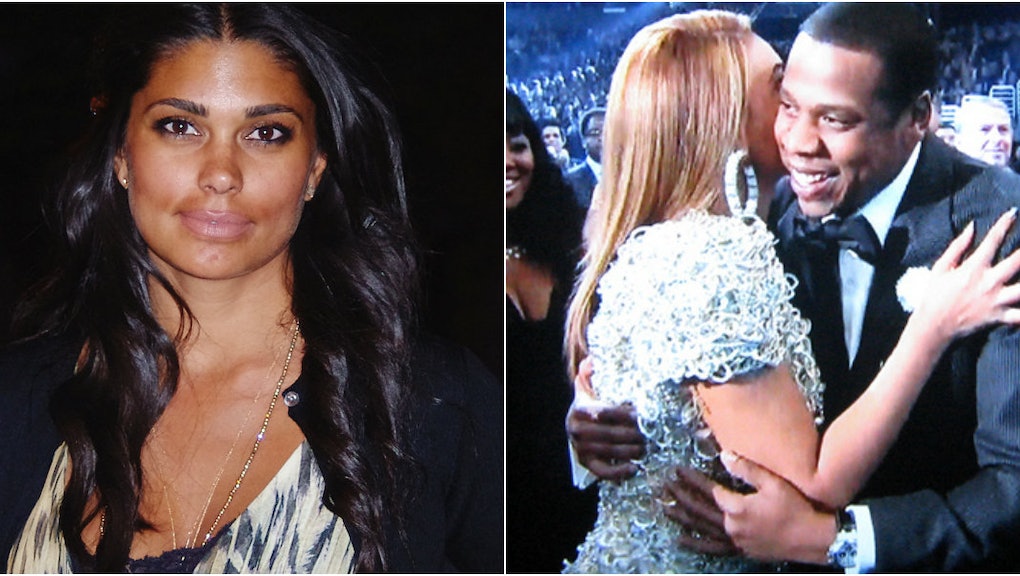 Rachel Roy, Beyoncé's 'Lemonade' and Why We Must Stop Shaming "Becky With the Good Hair"

You and your partner are never alone in your relationship — there's an extensive network of third or fourth or fifth parties quietly observing you from the outside. There's the self-deprecating, perpetually single friend who accompanies you on your Valentine's Day dinners, the sister who you call and tearfully confide in after a blowup argument at Bed Bath and Beyond, the sagacious older coworker who dispenses sex tips (whether they're solicited or not).

If recent press reports are to be believed, when it comes to the seemingly perfect marriage of one Beyoncé Knowles Carter and Shawn "Jay Z" Carter, Rachel Roy is the snow globe shaker.

A successful fashion designer and former spouse of Damon Dash, Roy was previously known to members of the Beyhive as someone who may or may not have been the driving force behind the infamous elevator incident of 2014, when security camera footage of Beyoncé's sister Solange seemingly attacking Jay Z made its rounds online.

Whispers that Roy's relationship with Jay Z spurred the altercation turned up to a shriek on Saturday night, when Beyoncé's much-anticipated visual album Lemonade dropped. While Lemonade is about many things — family, police brutality, black womanhood — most who watched the visual album focused on its raw confessionalism, particularly the lyrics that appeared to be a direct indictment of Jay Z's fidelity. Beyoncé begins one chapter of the video, "Apathy," with a mock eulogy for her marriage ("Ashes to ashes, dust to side chicks") before dryly referring to an anonymous woman named "Becky with the good hair."

Immediately, people started speculating that Becky was Roy. The fact that Roy had posted an Instagram the night before with the cryptic caption "good hair don't care" did not help matters:

Whether or not Roy is actually Becky with the good hair, or if Becky with the good hair is intended to be a stand-in for multiple paramours (or hell, whether Jay Z really cheated on Beyoncé to begin with, because art is not a reflection of real life, and no one asks if Katy Perry really shoots whipped cream out of her nipples) is obviously a question that we can't answer.

What's more interesting is how the Beyhive responded to accusations against Roy, with nary a peep about the man supposedly at the center of the allegations: with unmitigated vitriol. The Beyhive came for Roy hard and fast, editing her Wikipedia page to read "Rachel Side Hoe Roy" and her occupation as "wearing kneepads." (For what it's worth, Roy is an entrepreneur with a net worth of almost $12 million.) They even went after her daughter.

While the #Beyhive did go after Jay Z as well, the harassment was disproportionately targeted at Roy. This seems a little perplexing, considering that a) this is far from the first time that Jay-Z has been dogged by cheating rumors, and b) if Jay Z did, in fact, have sex with Roy, one can reasonably assume that, barring some 1980s teen sex comedy-type scenario wherein Roy tripped and fell on Jay Z's naked, erect penis, he happily consented to such an encounter. (It's also worth noting that as the owner of Tidal, which is streaming "Lemonade," Jay Z is directly profiting from his own alleged infidelities; Roy, one can reasonably assume, isn't getting a cent, unless you view a barrage of slut shaming tweets and death threats as a form of compensation in itself.)

Never mind the fact that the cheating husband in question is not just as culpable, if not more so, than the woman he cheated with; never mind the psychic tumult that must arise from falling in love with an unavailable man and knowing he will never be able to return that love, except under the fluorescent lights of a seedy motel room or in the storage closet of your office, as you lie back and wonder what will ever change, can it ever change, can he ever change; never mind the fact that that tumult should be deserving of our sympathy, not our scorn.

For women like Roy, there is no greater crime than not being able to keep it in your pants around a married man — even though clearly, the married man clearly couldn't keep it in his pants to begin with.

It's disappointing that even in 2016, our view of infidelity and female sexuality hasn't evolved to the point that we can look at a public accusation of infidelity and not immediately shame and bully the temptress who wagged her genitals in the unsuspecting married man's face — particularly since Beyoncé herself does not appear to bear that much ill will toward her husband's mistress (or mistresses). In the first half of "Lemonade," Beyoncé's rage is clearly directed at her partner, and the album that follows is a fiery reclamation of her own sense of identity in the wake of betrayal.

Above all else, however, it's none of our goddamn business whether Roy sat on Jay Z's penis or not — just as it's none of our goddamn business what goes on in any marriage. The fact that Beyoncé has made a public declaration of her marital anguish complicates this somewhat, but to reduce "Lemonade" to the sum of its parts as the torch song of a betrayed housewife would be doing a huge disservice not only Beyoncé and the album, but to Roy and Jay Z as well.

There are never just two people in any relationship. But even though we can watch from the outside and nudge each other and whisper and observe, we can never truly know what goes on inside the hermetically sealed bubble. When someone comes in and upends a marriage, shaking its contents back and forth, we might be tempted to sit and watch the pieces scatter, but we won't be able to see its actual contents with any real clarity. All we can do is sit back and wait for the pieces to silently settle on the ground.