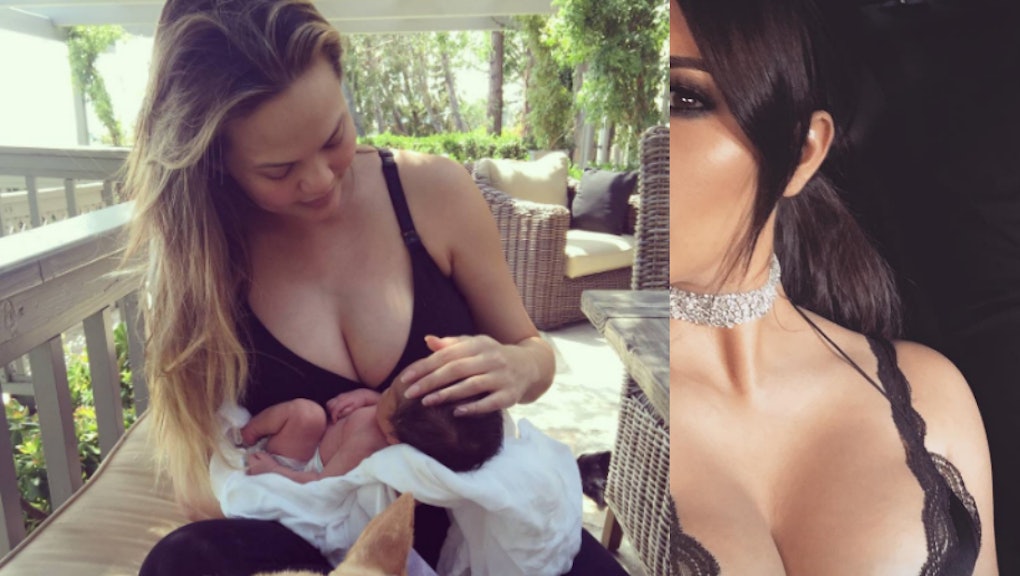 For those unfamiliar with the concept of the "push present," it's basically a gift that new moms receive from their partners after giving birth. New moms Kim Kardashian West and Chrissy Teigen both received such gifts — yet they were very different!

In a post on her website back in November, Kardashian West revealed her ultimate dream push present: a Lorraine Schwartz diamond choker, valued at millions of dollars. Fairly standard.

A few months after giving birth to her second child, it seems Kardashian West may have finally got her wish. Something that looks a lot like a million-dollar diamond choker made an appearance in a series of images Kardashian West posted to Instagram and Twitter last weekend.

Kim's choker is very shiny, but her ice cream cones are way too tiny. That rhymes. Anyway.

Shortly before Kim received this lavish addition to her jewelry collection, her pal Chrissy Teigen also shared her push present with the public. It's a little different, though, in that Teigen bought it for herself. It's also definitely not a diamond choker. Rather, it's a perineal irrigation bottle, or a tool designed to relieve post-childbirth irritation in the area between the vagina and the anus!

In case you're curious as to how a perineal irrigation bottle works, Michigan State University ob-gyn Nancy Herta explained it in a Self article last week:

If you have any kind of tear when you have a baby, it burns horribly when you urinate. As you urinate, you squirt warm water to dilute it so that it doesn't hurt as much.

So that's cute. Props to Chrissy Teigen for being not a regular new mom, but a cool new mom. One who lightly pokes fun at the concept of push presents by injecting a dose of post-childbirth-vaginal reality into the mix!

Different strokes (or in Kim's case: chokes) for different folks.