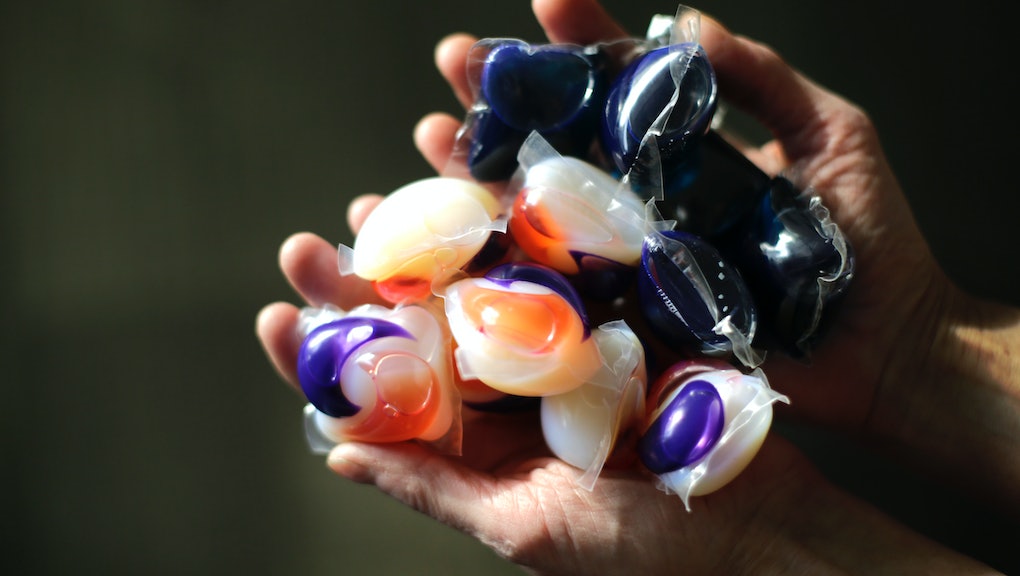 Those Detergent Pods Everyone Loves Are Poisoning Children Who Eat Them

Laundry detergent pods stop you from using too much liquid detergent and save you from getting slimy blue goo all over your hands.

Unfortunately, the brightly colored pods have a dark side: Staggering numbers of children are ingesting them, and the results can be fatal.

A study published this week in the journal Pediatrics found that 17,230 children under 6 years old experienced skin or eye injuries from, swallowed or inhaled laundry detergent pods between 2012 and 2013, CBS News reports. The outcomes were sometimes severe: 769 of the children were hospitalized, 30 went into comas, 12 had seizures and one died.

Half of the children reportedly vomited, while smaller percentages experienced "coughing or choking," "eye pain or irritation," "drowsiness or lethargy" and "red eye or conjunctivitis."

Why they're so dangerous: The detergent in pods is more concentrated than bottled liquid detergent, an American Cleaning Institute spokesperson told CBS News. And unlike liquid detergent, the pods often look like something you'd find in a candy store.

"We have never seen anything like this with laundry detergent in the past," lead study author Dr. Gary Smith, director of the Center for Injury Research and Policy at Nationwide Children's Hospital, told CBS News. "This is why we need to get the word out to parents if they decide to use this product among young children."

Previous concerns: In 2012 — two years after detergent pods entered the market — the Centers for Disease Control and Prevention warned that the pods were an "emerging public health concern," CBS News reported.

"Parents and caregivers should be particularly aware that young children might be drawn to laundry detergent pods because of their candy-like appearance, and that exposure to laundry detergent from pods has been associated with more severe adverse health effects," the report said.

Consumer Reports warned of the pods' dangers in 2012, and in 2015 removed them from its list of recommended laundry detergents, according to USA Today.

What's being done: Detergent companies have tried to make the pods safer. Some have made the packets harder to open and opaque in color, so they look less like candy.

Manufacturers' websites warn of the dangers, too: Tide, perhaps the best-known pod purveyor, urges parents to keep the packets out of reach of children.

But given the thousands of kids they're harming — an average of one per hour, according to CBS News — perhaps it's time everyone switches back to liquid detergent.