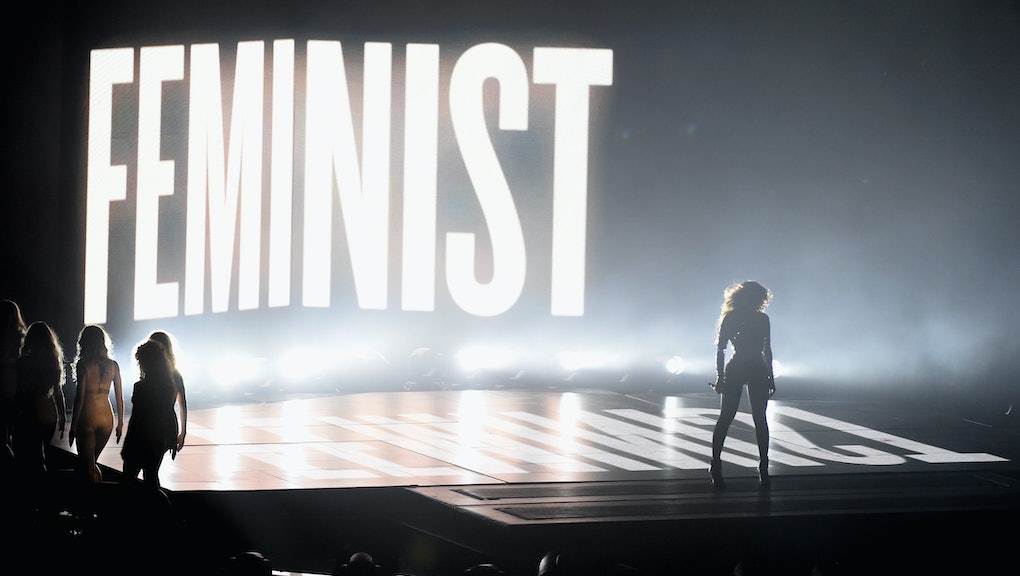 Nearly half of young adults in the United States are down with gender equality — they just aren't down with being called feminists, according to a poll released Monday.

Harvard University's Institute of Politics announced findings from the 2016 Survey of Young Americans' Attitudes Towards Politics and Public Service, a poll of 18- to 29-year-olds that evaluates respondents' political and social attitudes. In keeping with the increased focus on feminist issues this election cycle, the survey asked the 3,000-plus participants a handful of targeted questions about their views on sexism in society, such as whether they believe the glass ceiling exists or if men have more advantages.

The answers were definitive and, well, accurate: Young adults generally agree we have a ways to go before achieving gender equality, and seem to think feminism will help achieve that end. Still, they're not interested in calling themselves feminists.

The poll found approximately 3 in 5 young adults are fairly well-versed in the ways gender inequality affects women in the workplace, with 59% agreeing women (or anyone who's not a man, really) still face barriers to professional advancement. Additionally, 64% believe men are more advantaged than women, compared to just over a quarter who feel men and women are equally advantaged and a mere 7% of Men's Rights Activist-leaning thinkers who say women are the ones who are better off.

The findings varied a bit between genders; unsurprisingly, women were more likely to than men to identify disparities, especially in the workplace. Overall, though, the results indicate that gender issues matter enormously to young people, according to IOP polling director John Della Volpe.

"Almost two-thirds of people under the age of 30 in America in 2016 believe that men and women are treated differently," Della Volpe said in a phone interview on Monday. "That's a very significant statement in terms of where we are in the progress — or lack thereof — that America has made in terms of gender equality."

But young people's ability to recognize there's more work to be done still doesn't seem to be sufficient to get them to align themselves with a political movement to advance equality for everyone. While respondents appeared to be influenced by concern for improving women's lives when deciding which presidential candidate to vote for, according to Della Volpe, there was a divide between those who endorsed feminism as an ideology and those who actively identified as feminists.

The survey asked two specific yes-or-no questions about feminism: first, whether respondents identified as feminists, and second, whether they supported feminism. According to Della Volpe, just 27% of the sample said yes to the first question, while a significantly higher percentage — just under half — said they supported feminism more broadly, even though they weren't willing to call themselves the F-word.

"Almost two-thirds of people under the age of 30 in America in 2016 believe that men and women are treated differently."

Millennials' reluctance to call themselves feminists (despite generally being feminists) isn't a new phenomenon: In April 2015, a survey by the Public Religion Research Institute, a nonpartisan nonprofit organization, found 65% of millennials overall don't identify as feminists. More than half of "nonfeminist" men and women, however, agreed gender discrimination is still a problem in the U.S., indicating young adults are generally attuned to inequality regardless of how they identify.

According to Della Volpe, that's the case for more than just feminism: His survey asked a battery of questions about political identity, including whether or not participants identified as socialists, social justice activists, capitalists, progressives, patriots and more. Generally, the answer was no, even when young people supported a given issue.

"Essentially, across the board there was about a 20-or-so-point gap, on average, between what people identify as versus what they support," Della Volpe said. "For many years, we've seen through a variety of different questions that young people just aren't fond of labels. This is further evidence of that, because in some respects they support the cause or the ideology."

Indeed, millennials are even hesitant to identify as "millennials," so it should come as no surprise they're not inclined to associate themselves with a word as historically derided as "feminist" (even if Beyoncé and Chimamanda Ngozi Adichie did try to make the term cool again). What's promising is that young adults endorse feminist ideals, and aren't even wishy-washy about saying so; let's hope that holds up when they reach the polls in November.