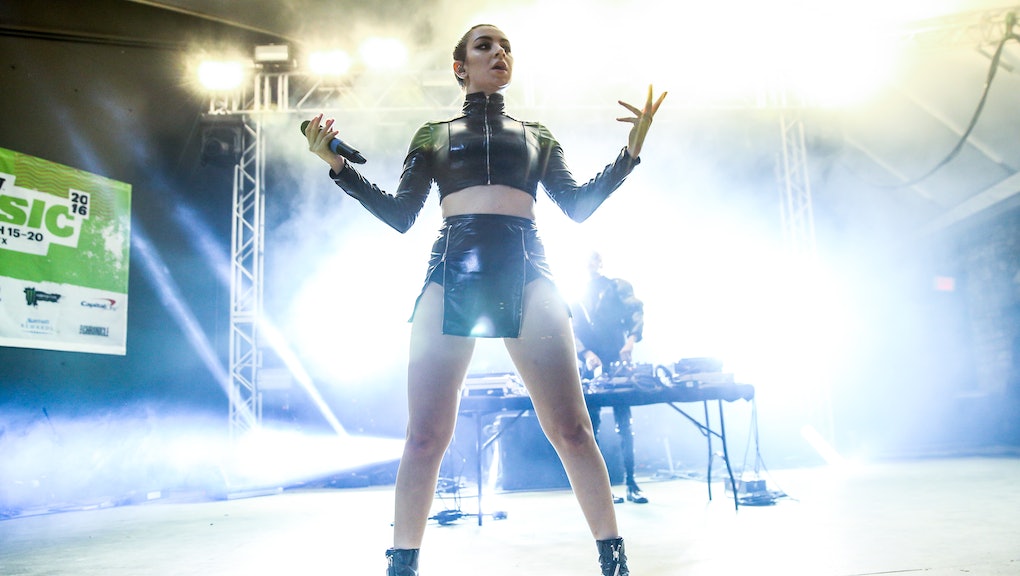 Since 1999, Denim Day has asked people to wear a pair of jeans on a Wednesday in April to raise awareness for sexual assault.

According to Denim Day's official website, the campaign was triggered by a 1999 ruling by the Italian Supreme court in which "a rape conviction was overturned because the justices felt that since the victim was wearing tight jeans she must have helped her rapist remove her jeans, thereby implying consent."

The day after the verdict in Italy, female members of the Italian Parliament showed up in jeans as a sign of solidarity. And for the past 17 years, the non-profit organization Peace Over Violence, which now organizes Denim Day, has asked elected officials, students and businesses to make a statement by wearing jeans to work or class.

Read more: This "Booby Trap Bra" Will Help Protect Women — But Not as Much as Stopping Assault Can

The idea that clothing could have weight in a conversation about sexual assault may sound familiar to you. Statements like "She was asking for it" in relation to someone's clothing and their rape have been swirling around for years, along with rape survivors being asked things like "Well, what were you wearing?" It is the go-to scapegoat. And that sort of language has led to the unfortunate truth that most women find some fault with the woman who herself was assaulted.

To highlight this societal problem that doesn't yet have a clear solution, Mic has rounded up nine instances from the last decade (although there really could have been 99) when clothing was blamed for sexual assault rather than, well, the obvious: the person who decided to rape.

A judge in 2006: "They made their intentions publicly known that they wanted to party."

Back in 2006, a rapist in Manitoba, Canada, was given no jail time because, according to the judge, the 26-year-old woman, who was forced into intercourse in the woods along a highway, met the rapist under "inviting circumstances." He noted that she and her friend were wearing, per the Winnipeg Free Press, "tube tops with no bra, high heels and plenty of makeup."

"They made their intentions publicly known that they wanted to party ... This is a different case than one where there is no perceived invitation," the judge, Robert Dewar, said. "This is a case of misunderstood signals and inconsiderate behavior."

An invitation to what, exactly? That's what we'd love to know. In response to the decision, the internet was clearly outraged, but couldn't exactly overturn the decision itself.

A police officer in 2011: "Women should avoid dressing like sluts in order not to be victimized."

A word of advice from a cop to a group of 10 female students in Toronto: "You know, I think we're beating around the bush here. I've been told I'm not supposed to say this — however, women should avoid dressing like sluts in order not to be victimized."

In this case, the officer's name was Michael Sanguinetti, and rather than brush off this statement he made in January 2011, the women who listened to him sparked a movement. Months after Sanguinetti's comments went public, "Slutwalks," as they're known, began.

On college campuses across North America and even the world, women started to hold rallies where they dressed scantily in an effort to erase the idea that victim-blaming is in any way acceptable, and that they are ever "asking for it," by way of the clothes they decide to wear or not wear. Still, to this day, they pop up on campuses and in city centers.

A rape survivor in 2010: "I was wearing what my mother described, disapprovingly, as an extended belt, but what to me was just a fashionable miniskirt."

In 2010, in response to a study that found that more than 50% of women partially blame other women for their own sexual assaults, writer Jenni Murray wrote an essay in the Daily Mail as to why that may be. Or, rather, why she kinda thinks so too.

In the essay, she writes about her own sexual assault in 1969 when she was just 19, and a man punched her in the face before forcing himself upon her. She gives a few circling ideas as to why that may have happened. Among them: She was drinking. But also: She was wearing too short a skirt. Murray went on to write that she didn't think she could report it, because, "After all, hadn't I worn a short skirt, been drinking and willingly gone back to his house?"

In this case, it isn't a judge or cop that's blaming the victim, but the victim herself. Given the results of that study, that's not exactly surprising. In the fallout from the piece, several writers leapt to comment on the cultural implications of such a statement. Amanda Hess offered a simple, swooping rebuttal of that sort of thinking in the Washington City Paper, writing, "Wearing a short skirt has little actual connection to a person's personal safety — miniskirts are an entirely socially constructed vulnerability."

The governor of Jakarta in 2011: "Imagine if someone sits on board a [minivan] wearing a miniskirt; you would get a bit turned on."

In response to a young woman getting raped and murdered on public transportation in Jakarta, Indonesia, the capital Gov. Fauzi Bowo spoke out. What he did was not condone her killing, or her rape, but instead, place blame on what the girl was wearing.

"Imagine if someone sits on board a mikrolet (minivan) wearing a miniskirt; you would get a bit turned on," he said.

Additionally, for him, women should "adjust to their environment so that they don't provoke people into committing unwanted acts."

In response, dozens of women gathered in the center of the city to demand an apology, while wearing miniskirts. According to the IB Times, the women came carrying signs emblazoned with slogans like "Don't Tell Us How to Dress, But Tell Them Not to Rape" and "My Mini Skirt, My Right."

A priest in 2012: "How often do we see girls and mature women going around scantily dressed and in provocative clothes?"

Christmastime is usually a time of joy, hope and relative serenity. But for a Catholic priest in Italy in 2012, it was the ideal time to victim-blame. In a message that he printed and posted on his church's door, Piero Corsi wrote, "How often do we see girls and mature women going around scantily dressed and in provocative clothes?"

The statement itself was a response to the 118 women who were killed in acts of domestic violence in Italy that year, and the wave of sexual violence throughout the country. "They provoke the worst instincts, which end in violence or sexual abuse," Corsi wrote. "They should search their consciences and ask: Did we bring this on ourselves?"

We think we know the answer to that one. In response to the letter, though, there was little questioning or reaction.

A nightclub owner in 2013: "She's dressed in an overcoat and underneath it, has a miniskirt on. Well, what's she playing at?"

In 2013, after a woman was sexually assaulted at a popular nightclub in Bogota, Colombia, the club's owner, Andres Jaramillo, came forward with some of the reasons he thought it happened. In short: The miniskirt, an article of clothing with an undeniably feminist history.

"Let's consider what happens when a 20-year-old girl comes [to the restaurant] with her girlfriends, who is then left by her father in the hands of God," he told the local radio station BlueRadio. "She's dressed in an overcoat and underneath it, has a miniskirt on. Well, what's she playing at?"

In response, more than 100 women and men gathered in the country's capital to protest, and brought their miniskirts with them. Additionally, online, the hashtag #YoMePongoUnaMinifaldaYQue, or, "I wear a miniskirt — so what?" went viral, as people condemned the idea that miniskirts are directly responsible for someone raping another person.

A cop in 2014: "If a woman is wearing provocative clothing, the change needs to come from her."

In 2014, Egypt's Cabinet approved a draft of a bill that criminalized sexual harassment. To some, it was a good step forward, but for others, it was seen as not enough. In order to enforce a law fully, you'd need the police on your side — and they simply weren't.

In an interview with the Huffington Post, Captain Ahmed Mahmoud, a policeman in Cairo, stated, "If a woman is wearing provocative clothing, the change needs to come from her."

Certainly not all policemen felt the same way, but it was clear that back then, there was some work and sexual assault educating to be done. More than anything, the cop's statements helped international outlets like Al Jazeera speak on and reveal real problems within the police force at the time.

Author Susan Brownmiller is best known for her 1975 book Against Our Will: Men, Women and Rape, which changed the conversation when it came to blaming the rape victim. But 40 years later, her views had changed.

"People think they can have it all ways," Brownmiller told the Cut. "The slut marches bothered me, too, when they said you can wear whatever you want. Well sure, but you look like a hooker. They say, 'That doesn't matter,' but it matters to the man who wants to rape. It's unrealistic."

And it's sentiments precisely like that which put the blame firmly on the victim and their clothing, and not on the rapist. On the internet, there was slight outrage, but the comments were mostly seen as a sign that the woman was simply out of touch.

A rock star and rape survivor in 2015: "If you're wearing something that says, 'Come and fuck me,' you'd better be good on your feet."

Founding member of the Pretenders, Chrissie Hynde, was raped more than 40 years ago by a motorcycle gang member when she was just 21. But in 2015, she had choice words for other survivors of sexual assault. And by that, we mean, words about what women do to entice men into rape.

"If I'm walking around in my underwear and I'm drunk? Who else's fault can it be?" Hynde told the Sunday Times while promoting her memoir. "If I'm walking around and I'm very modestly dressed and I'm keeping to myself and someone attacks me, then I'd say that's his fault. But if I'm being very lairy and putting it about and being provocative, then you are enticing someone who's already unhinged — don't do that."

To add fuel to the fire, she added, "You know, if you don't want to entice a rapist, don't wear high heels so you can't run from him. If you're wearing something that says, 'Come and fuck me,' you'd better be good on your feet."

Hynde, similarly to Jenni Murray in 2012, still believed that part of the blame laid on her, the victim. What's at play here, exactly? Well, a person's belief is a person's belief, but this instance does go to show you the powerful effects of how we talk about rape, rapists and survivors.

And don't think that these nine instances are all there is. There was the time when a woman named Hannah Graham was raped and murdered and the fact that she was wearing a midriff-baring top mattered as it was seen as making her more vulnerable. There was also that time in 2013 when a woman accused three Naval Academy football players of raping her and she was asked whether or not she was wearing a bra, and that time when the sexual assault of CBS reporter Lara Logan was blamed on her "dressing provocatively."

At this point, laying the blame on clothing is common, and we're sick of it.