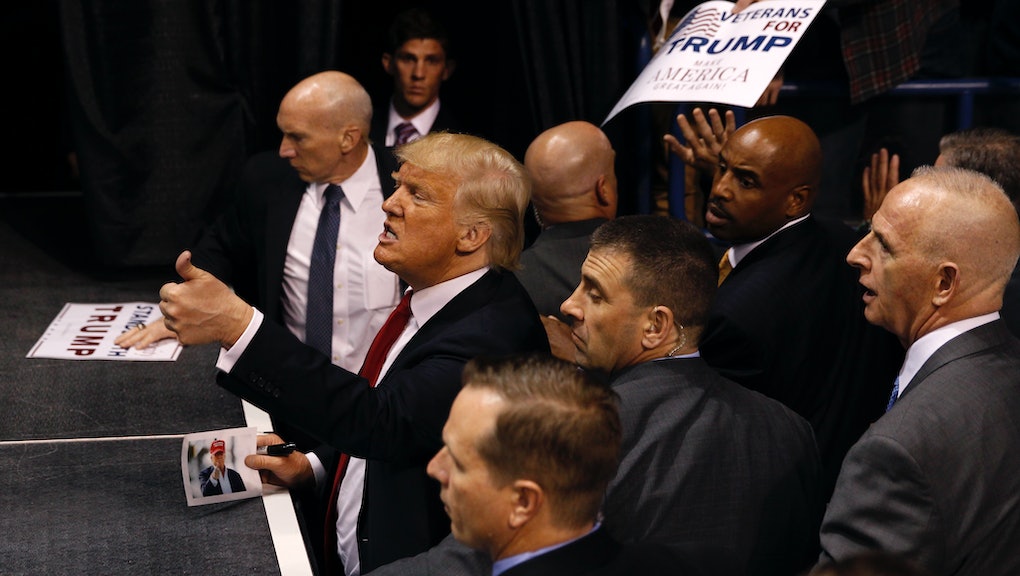 Donald Trump's support among Republicans has hit 50% on the eve of the final wave of presidential primaries, a new NBC News/SurveyMonkey poll out Tuesday shows.

The results are good news for the frontrunner: He's long led his rivals in national polls of the GOP field, but still failed to capture the backing of half of Republican voters.

"This milestone is significant as the 2016 primary heads into its final few weeks of contests, as there has been intense speculation that Trump's support has a ceiling," NBC reported.

The weekly election tracking poll, run online from April 18-24, marked the first time since late December the billionaire candidate reached this level of support among GOP voters and those who lean that way in his fight against Ted Cruz and John Kasich.

Cruz received 26% support among GOP voters and leaners in the poll. Kasich got 17%.

"Overall, this week's six-point swing — Trump up four points, Cruz and Kasich down two points — is the biggest weekly shift in the poll so far," NBC noted.

"Combined with his significant win in New York, Trump's rise nationally could be an early sign of consolidation within the Republican Party."

Not quite there: As of yet, no GOP candidate has reached the 1,237 delegate threshold needed to claim the nomination. The party is girding itself for a contested convention in July.

Last week in Florida, Republican National Committee leaders debated and voted down a rules change that would have made it easier for establishment insiders to advance a "white knight" candidate as nominee.

Cruz and Kasich subsequently announced what amounted to a "Stop Trump" non-aggression pact. The deal means to clear the way for Cruz to take on Trump in the Indiana primary and let Kasich focus on challenging the frontrunner in Oregon and New Mexico.

In the new poll, 58% of GOP voters agreed with Trump that he should win the nomination if he has the most delegates, even if he fails to reach a majority. That was up from 55% the previous week.