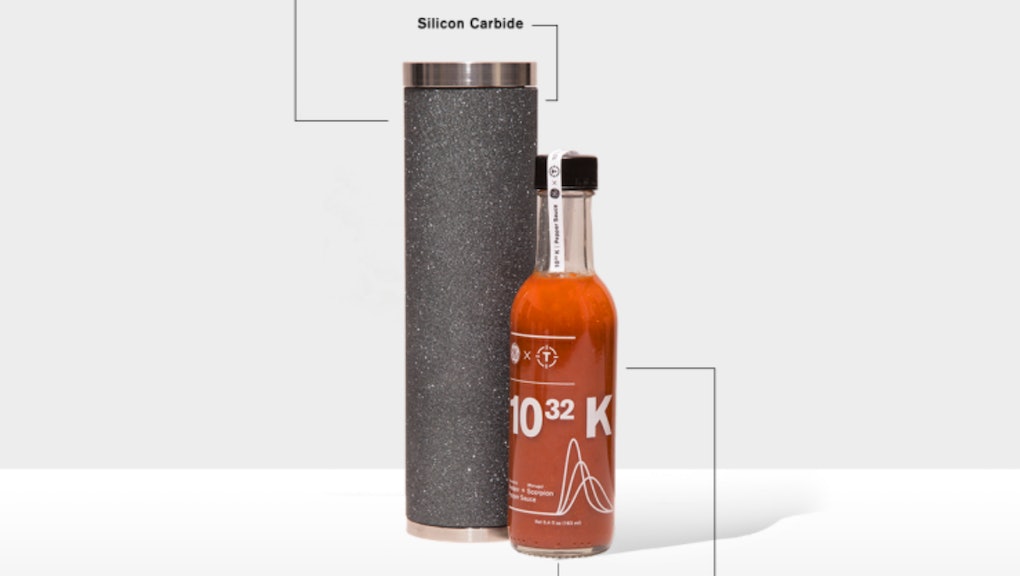 This Hot Sauce Is So Spicy, GE Had to Bottle It With Jet Engine Material

Do you keep hot sauce in your bag? Is Frank's RedHot or Tabasco just not cutting it? Are you feeling masochistic? Good news: GE collaborated with Thrillist to create 10^32K — a hot sauce so unrepentantly spicy it had to packaged with material normally reserved for manufacturing a jet engine.

According to the Next Web, 10^32K hot sauce contains a blend of the Carolina Reaper (a hybrid between the Ghost pepper and red habanero) and the Trinidad Moruga Scorpion pepper. Each one of these pepper on their own can exceed 1 million on the Scoville scale, which measures heat levels through capsaicin; the combination of both can only result in:

The hot sauce's name, 10^32K is a tongue-in-cheek reference to the Kelvin temperature of "Absolute Hot," the highest theorized temperature in contrast with "absolute zero." To protect the hot sauce, the Next Web writes that 10^32 Kelvin is packaged in a tube made with "silicon carbide and nickel­-based superalloys, or what the company describes as materials used in jet engine manufacturing." But it's not all for show and weight: the material helps preserve the heat and taste of the sauce by preventing oxidization.

With all that said, GE only produced one thousand bottles of 10^32K, which all sold out. However, you can try your luck in a sweepstakes to win a bottle. Should you win, you'll be able to say the following with conviction (and probably a numbed tongue):

h/t the Next Web