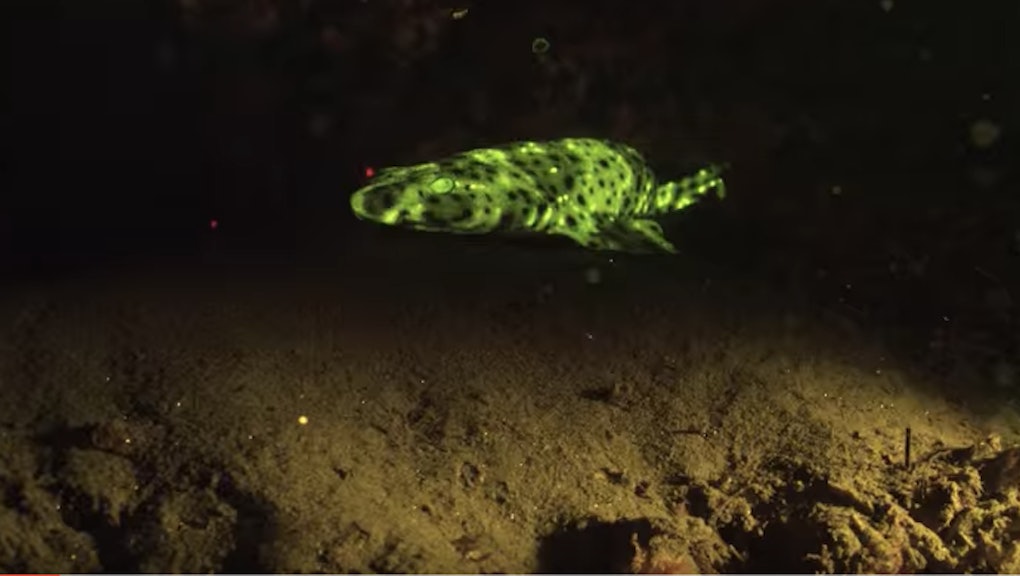 The concept of glow-in-the-dark sharks is infinitely intriguing, so naturally, science developed a new camera, the better to see them with. As the Washington Post reported, its lens mimics the eye of a shark, allowing researchers to see sharks as they see one another whilst sharking around in the deep sea. According to a paper published Monday in the journal Scientific Reports, biofluorescent sharks glow greener at greater depths.

Read more: The Thing That Washed up on an Australian Beach Proves That Monsters Are Real

"This is one of the first papers on biofluorescence to show a connection between visual capability and fluorescence emission, and a big step toward a functional explanation for fluorescence in fishes," said the American Museum of Natural History's John Sparks, co-author of the study.

The researchers looked at two catshark varieties: the chain catshark and the swell shark. The swell shark can swim down to 1,180 feet under the ocean's surface, while the chain catshark occupies deeper waters, up to 1,800 feet below the waves, where the water absorbs most waves of light except for blue. According to the paper, the sharks glow when their skin absorbs the blue light and reemits it as green light, which appears brighter as they swim deeper.

It's a glow that only sharks can see, though — catsharks appear a dull, muddy brown to the naked human eye. With the help of a camera that replicates "fishy vision," in the Washington Post's words, we can now appreciate the luminous beauty of previously boring-looking sharks.

We can also expand our understanding of biofluorescence and its evolutionary purpose. The scientists think it might allow catsharks to communicate with one another and camouflage themselves from predators. Whatever its specific function, though, shark glow only substantiates the theory that deep sea creatures win.