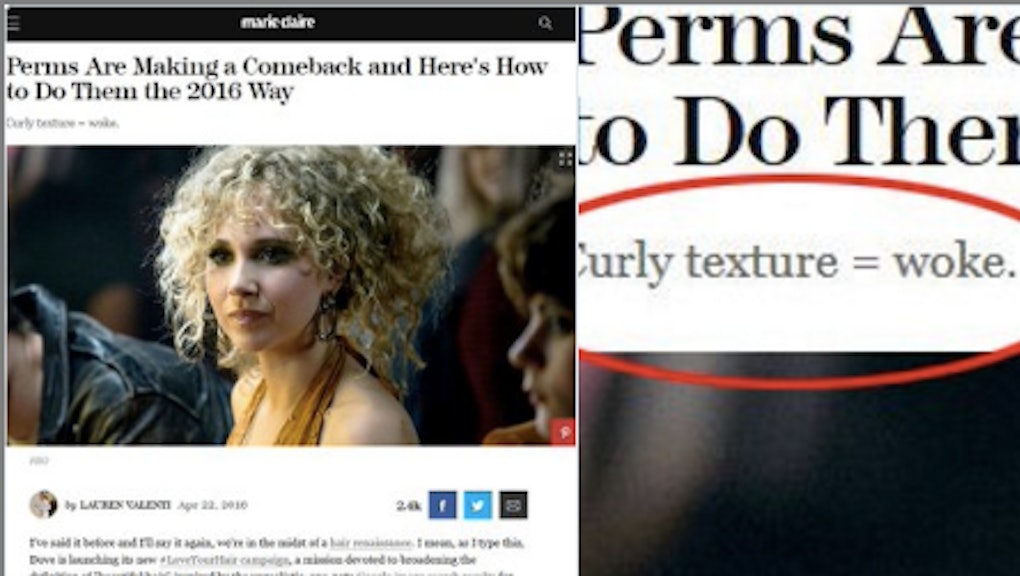 Dear Marie Claire, If You Think You’re "Woke" by Getting a Perm, Go to Sleep

Anyone who now uses the term "woke" in a serious way should take a few milligrams of melatonin and call it a night.

You can credit the New York Times Magazine for helping to put the word to bed after it published "Earning the Woke Badge," a deep look at the word's origins, in April. "Woke" — or rather, the mantra "stay woke" — came into widespread use among Black Lives Matter activists to encourage supporters to recognize the structural underpinnings of racism, sexism and anti-LGBT discrimination. As Amanda Hess points out in the Times Magazine piece, in its original context the term "denotes awareness, but it also connotes blackness."

Since "woke" has been co-opted by the mainstream, Black Twitter uses it mostly for irony's sake, subverting its original meaning. It's become the formula for a joke, with users tacking #STAYWOKE to the end of tweets to make an obvious — and often ridiculous — point.

In a failed attempt to show how hip it is, Marie Claire magazine used the term "woke" unironically to describe perms, saying the hairstyle is making a "comeback" thanks in part to Dove's #LoveYourHair advertising campaign.

While the premise of the article itself is fine — hey, if curly hair is the new black, woohoo! — describing the trend as "woke" doesn't make any sense. Wearing your hair curly doesn't necessarily mean you're making a political statement. There's no evidence that the adoption of the hairstyle is part of a socially conscious, vanguard movement for racial justice.

The term isn't taken seriously among black audiences, but it's even more laughable when it's used by white editors to describe hair texture. The magazine changed its sub-headline on Tuesday to "Rod size is everything" — of course, many Twitter users had already shared their reactions:

This isn't to say hair can never be political — the politics of hair is a tangled weave, especially when it comes to black women. On perms, black and white women often think of opposite things. For us, it''s the "creamy crack" — white goop slapped on our roots to get bone-straight hair. For decades, silky tresses on black women were deemed the preferred hairstyle by mainstream society. Even today, straight hair is seen as more "professional" compared to naturally curly hairstyles. As Paul Mooney said in Chris Rock's 2009 documentary Good Hair, "If your hair is relaxed, white people are relaxed."

So sure, curly hair is in. Just look at all the examples of natural hair gurus with thousands of followers on YouTube, who are helping the multimillion-dollar black hair care industry get bigger and bigger.

The Marie Claire snafu was an out-of-touch comment on language and a curly-hair trend that's been rockin' on for the last several years. If nothing else, it shows that it's past time for white magazine editors to think a bit harder about word choice around hairstyle trends. Or better yet, employ a few more black woman editors — cause lots of us woke up like this.