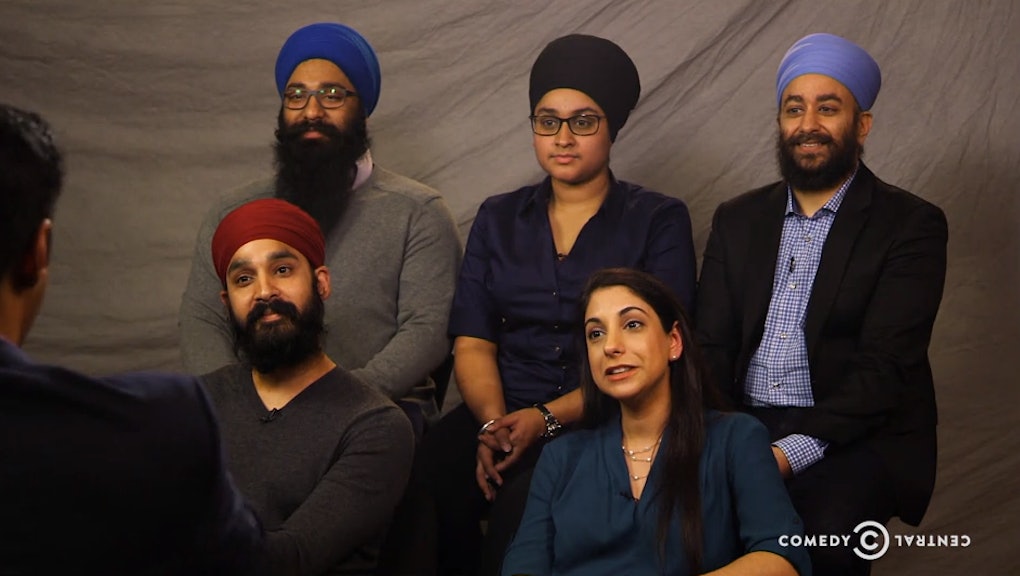 'The Daily Show' Nailed How Islamophobia Hurts the Sikh Community Too

Islamophobic rhetoric has been an undeniable part of the current Presidential election: In December, current Republican frontrunner Donald Trump proposed a ban on Muslims entering the country, and in March, Texas Sen. Ted Cruz called for armed patrols of "Muslim neighborhoods."

Daily Show correspondent Hasan Minhaj, who is Muslim, sat down with Sikh American and artist Waris Ahluwalia, to talk about the discrimination he faces just because he "looks Muslim."

"Almost every time I fly back to the U.S. I get a secondary screening," Ahluwalia said. "People assume that Sikhs are Muslims and that's primarily an issue because Sikhs are an independent religion."

According to Harvard University's Pluralism Project, "today there are well over 500,000 Sikhs in the United States," but, since 9/11, Sikh Americans have become the "targets of varying degrees of hate crimes" because of their turbans and beards.

In addition to hearing from Ahluwalia, Minhaj also sat down with a panel of Sikhs living in America to hear about their experiences with discrimination. "I've been called ISIS a lot recently," one of the guests told Minhaj. "The turban is what makes us the target," said another.

But when Minhaj suggests that Sikhs could avoid some of that pesky Islamophobic discrimination simply by telling everyone they're not Muslim, the answer from the group is definitive. "It's just not an option for us to throw another community under the bus," one of Minhaj's guests said. "Even if it means things are harder for us, we believe it's the right thing to do."

"That's not the way I was raised," Ahluwalia tells Minhaj. "That's why I wear this turban. As a reminder to myself to treat humanity with care and kindness. So that's — so I'm not here to point fingers."