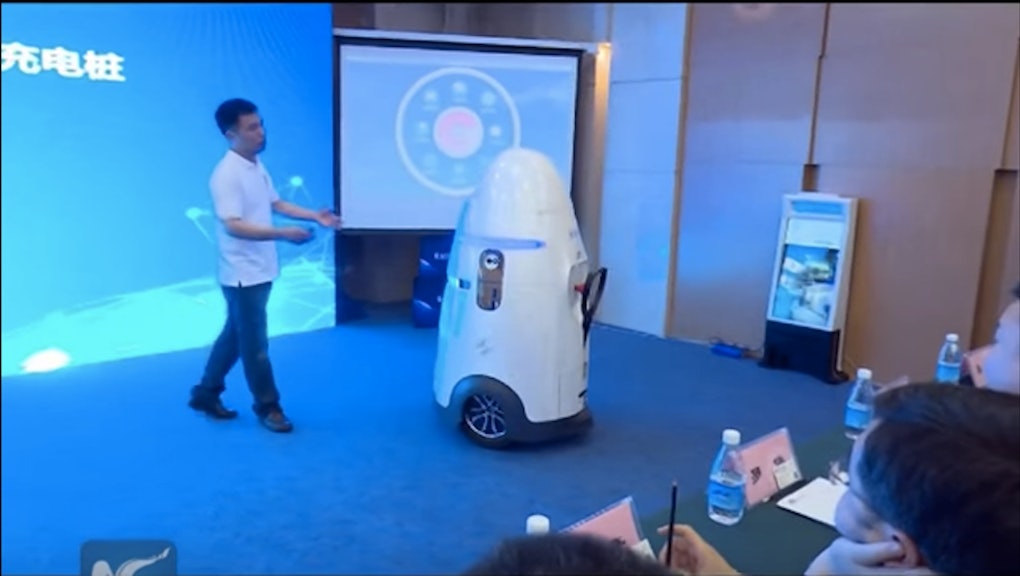 Look out, rule-breaking rascals terrorizing China's flat terrain: Robocops are coming for you. As Time reported, the National Defense University just introduced the AnBot, its roughly human-sized patrol droid designed specifically for fighting crime, at Thursday's Chongqing Hi-Tech Fair. It looks a lot like R2-D2 from Star Wars, but bigger and without legs for stair-climbing.

Read more: This Robot Led People to Their Doom — And Sheeple Still Followed It

"The security robot is capable of autonomous patrol, intelligent monitoring, emergency calls, auto recharging and has optional modules for environmental monitoring, biochemical detection and clearing explosives," according to Infowars. It is not capable of tackling non-flat surfaces.

According to Time's translation of the Chinese newspaper People's Daily, the bots use "sensors that mimic the human brain, eyes and ears." The humans controlling the machines can sick 'em on terrorists and crowds of rioters, whom the bots reportedly exist to combat, so long as those miscreants don't flee down a fire escape or head for uneven ground.

The AnBot isn't the first robocop iteration created to police China's streets. A police department in Kunming, China, used a more man-like robot to gather surveillance footage from the city's streets following the 2008 Olympic games in Beijing. Apparently, the people of Kunming had a habit of defacing the so-called Smart Swats. Those were immobile, though — the AnBot can roll along for up to eight hours of uninterrupted chasing on sidewalks, paved roads and other smooth terrain.