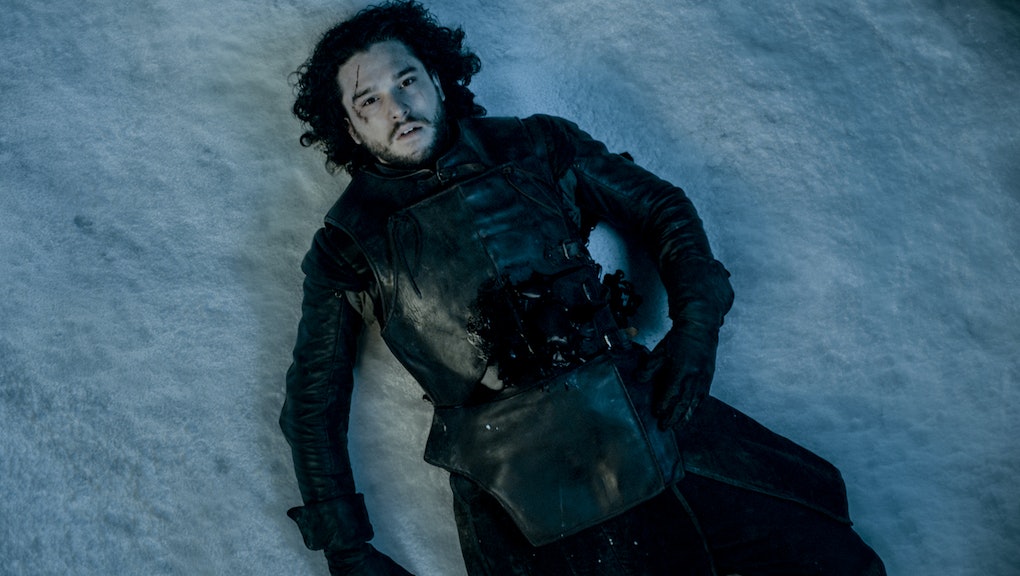 The question has been asked for what seems like an eternity, but since we still don't have a definitive answer, we have to bring it up time and again: Is Jon Snow really dead? Everyone's favorite Northern bastard from Game of Thrones (not that there's much competition) laid in a pool of his own blood as the credits rolled for the season five finale. Five months later, we find ourselves quite literally where we left off, with Ser Davos discovering Snow's body and carrying it away.

At first glance, Jon Snow's death scene seems pretty straightforward: He was stabbed by his Night's Watch brothers, including the traitorous Olly. However, there are actually some cryptic clues that could help viewers comb the scene — and they're concealed in the patterns of Snow's blood.

Read more: What the Melisandre Reveal on 'Game of Thrones' Means For the Fate of Jon Snow

Indeed in the season five finale, viewers noticed that the blood trickling down Snow's body seemed to briefly form the shape of a howling wolf. It's a significant symbol, given his Stark parentage, as well as his pet direwolf, Ghost.

And in Sunday's season six premiere, after Davos takes away his body, some saw dragon wings in the patterns of blood he'd left in the snow. Others saw a man riding a dragon.

Though there's certainly a fair level of skepticism with these images, there's good reason to point to them as somewhat justifiable. Namely, one of the most popular Game of Thrones fan theories — R+L=J — posits Snow's parentage to be half (Lyanna) Stark and half (Rhaegar) Targaryen. Assuming that's correct, Snow then embodies both a direwolf and a dragon. And to some, he is the personification of George R.R. Martin's entire A Song of Ice and Fire series.

In true fan theory fashion, a definitive answer is about as unclear as Melisandre's visions from the Lord of Light. That said, the series could delve into his true parentage during the widely anticipated Tower of Joy flashback scenes. Until then, devoted fans will continue to speculate.

For a more detailed look at the R+L=J theory, check out this explainer by YouTuber Alt Shift X below: