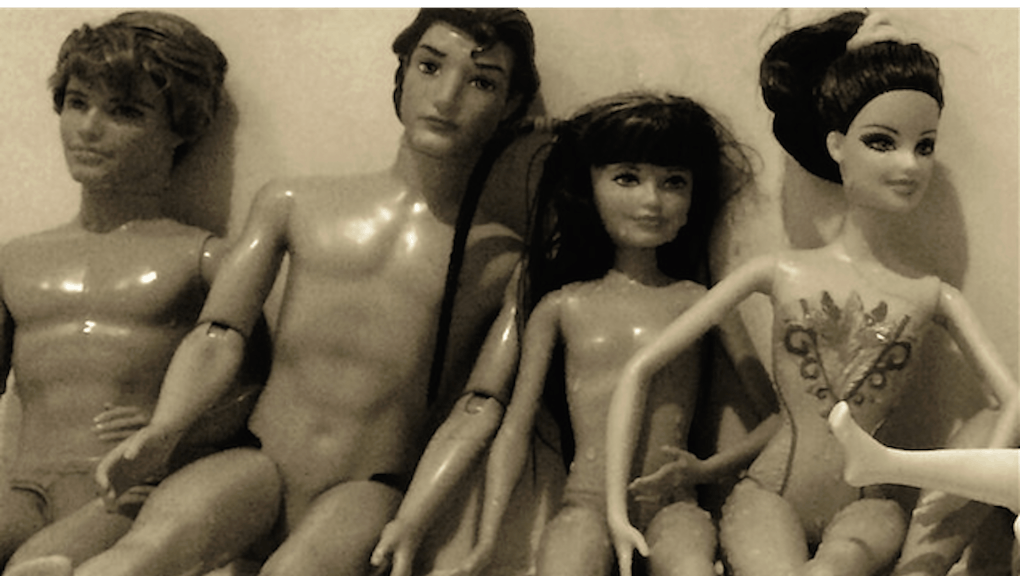 Meet the People In 'Quads,' or Foursome Relationships

We've heard of throuples, or couples who invite a third party into their relationship. But is there such thing as a couple that dates another couple? In the poly community, there is, although it's relatively uncommon: When two couples are in a relationship, it's known as a "quad."

What is a quad? One fairly successful quad is Jill*, 42; her husband and primary (a term used to describe her primary relationship partner) Eric, 48; Amanda, 38; and Amanda's primary Mark, 39.

The four are the founders of the app The Poly Life, which they created as a way to organize details such as sleeping and dating schedules. They live under one roof with a combined total of seven children, whom they parent collectively.

According to Franklin Veaux, polyamory activist and author of More Than Two, the quad setup described above is typical, although quads in general are not.

"I've seen occasional instances where everyone is sexually involved with everyone else, but that's quite rare," Veaux said in a Skype interview last week. "I would say [quads are] really not that common in the poly community."

A quad is different than swinging. While the sexual pairing of two couples is known as swinging, quads are multiple, full-blown relationships, which typically combine sex with love. "The swing culture is very focused on emotional monogamy and on the idea that you have one partner. You have sex with other people, but they are not 'partners,'" Veaux explained.

To establish a successful quad, all parties must communicate to ensure they are on the same page.

Although polyamory and swinging are very different, Jill and Eric started out as swingers before ending up in their quad. Jill began to develop romantic feelings for the male half of a couple with whom she and Eric had been swinging.

"The four of us had become friends, but nothing more than friends with benefits, so it came as a surprise when I had feelings for him. That got us talking about me dating, not just sleeping with men, outside of our marriage," Jill said. "It was hard for us at first, especially for Eric. He was never a jealous person, but suddenly he was experiencing jealousy when I would go on dates without him."

Jill and Eric worked through the jealousy issues, and they now have identified as polyamorous for seven years. They met their current partners, Amanda and Mark, at a church function, of all places. "We live in a Christian, conservative neighborhood. We started out as friends, and it was a great surprise when we both had feelings for them," Jill said.

They've been in a relationship with Amanda and Mark for 3 1/2 years. "We still have hard days, but they're far between," Jill said.

Especially for polyamorous families with children, as group marriages are not legal, an array of complicated legal matters can arise related to collectively raising children. As Mic has previously reported, "polyamorous partners have to cobble together custom-made custodial arrangements, without getting the courts involved at all."

"We feel we would be judged."

While it might seem strange that Jill and Eric are polyamorous Christians, they see no conflict between their faith and their lifestyle. Currently, they are out to their friends and family, but they stay quiet in their community for fear of judgement.

The key to their success, as is the case in all relationships, has been communicating openly and honestly with each other about the challenges of being in a quad. "Listening and not reacting takes practice, and with such busy lives, we can get triggered and communication can break down," Jill said. "Communication, ego-checks and scheduling is crucial to making us work."

The four of them co-parent their collective seven children, being honest with them about their bedroom schedule, which they say has lead to good-natured jokes from the children. "We have a schedule of who sleeps with [whom] in what bed," Eric said. "It's become something a few of our kids now joke about when we deviate from the schedule like, 'Oh, Jill's fighting with Eric because Mark is in the guest room,' (and Jill is sleeping with Amanda)."

Four people, four problems: While Jill's family appears to be proof that a successful quad is possible, it's important to enter a quad for the right reasons. While Jill's quad is not closed, meaning they sometimes see outside partners, frequently, "closed quads" form in an effort to protect from jealousy issues that can arise in polyamory.

"What I tend to see happen many times is that you'll have two couples that will start dating in a quad because they believe that's a way to avoid dealing with jealousy or insecurity [by having the same number of partners]," Veaux said. "Like if I've got two partners, and my wife has two partners, then we both have two partners so nobody is going to feel jealous. When you try to deal with jealousy by creating structure instead of dealing with insecurity, it tends not to work."

Entering into a quad for the wrong reasons typically leads to chaos and hurt feelings. Often, the partners will just break up for each other. "What they'll end up doing is swapping couples and then breaking up," Veaux said. "That happens so often it's almost a trope."

Bottom line: "Don't look to being in a quad to solve problems where somebody is not getting what they want. It might work, it might not," Veaux warned.

But if two couples enter a quad because they have feelings for each other, rather than trying to fix a hole within their own relationship, the benefits can be enormous — for the entire family.

"We raise all the children as if they are our own," Jill said. "If one of us can't be at one of our kids' events, we cover each other. The other benefits, for us, are companionship, emotional and financial support. Sharing our finances with each other and working towards bigger goals has been extraordinary: Because the money pot is bigger when you have four people contributing, our goals are becoming real. We're one big-ass happy family!"

As Veaux sees it, there's nothing wrong with being in a big-ass happy family. "I remember being a kid in English class, I was about 11," Veaux said. "The teacher was reading us this story about this beautiful princess who was being ruled by two princes. I was like, 'Princesses live in castles, right? Castles are big enough for three people. So what's the problem?'"

*Last names have been withheld to allow sources to speak freely on private matters.