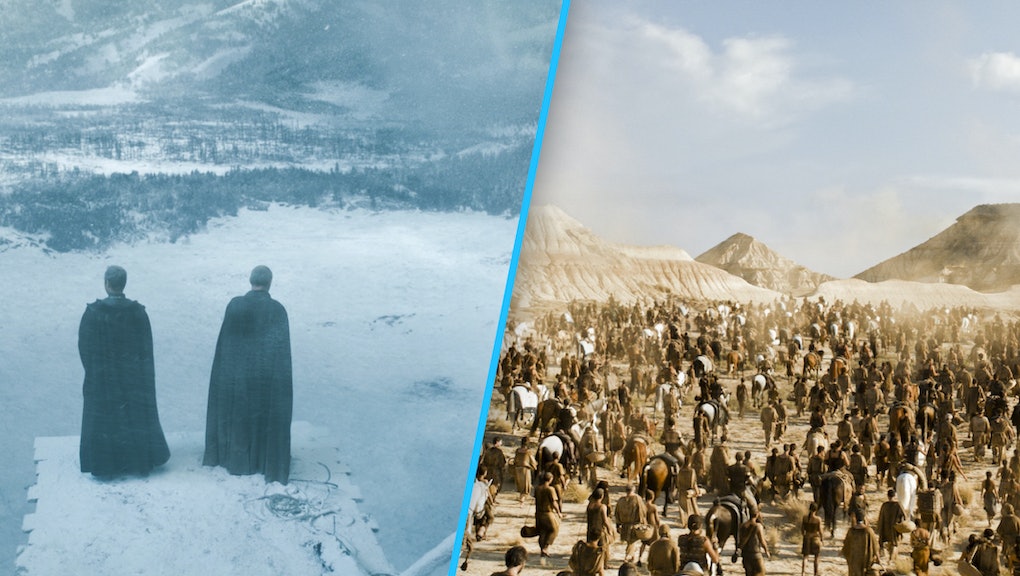 Climate Change and 'Game of Thrones': If the Wall Melted, Would Westeros Drown?

The frozen wall that protects civilized Westeros from the murder-crazy zombies in Game of Thrones is thicker than seven school buses parked end to end and longer than the state of Maryland. What if, due to a bout of global warming that rivaled the crisis currently devastating planet Earth, the Wall melted?

Reddit users on the subreddit /r/TheyDidTheMath sought to find out: Would a full-on global-warming-esque liquefaction of the Wall be enough to turn Westeros into a giant waterpark?

Calculating All the Water in the Wall

First, users took dimensions from the Game of Thrones Wiki page and came up with a few numbers: The Wall is over 700 feet high (213 meters) and stretches 300 miles (482,803 meters) from Shadow Tower to Eastwatch-by-the-Sea.

The width at the top of the wall is "wide enough for a dozen mounted knights to ride abreast," according to the Wiki, so we can estimate (as this redditor did) roughly 48 feet. That's 12 men with a shoulder width of 20 inches, wearing 3 inches of armor on both sides (the size of steel pauldrons like these) and about a foot on both sides of the horse, barely enough room not to fall off the fucking wall.

When ice melts, the resultant volume of the water is 0.92 times the original ice volume. So after the Wall has completely melted, the resultant water volume will be 8,609,516,905 cubic meters. (This is higher than the redditor's result, which didn't factor in the Wall's average width.)

If we divide the volume of water by the area, we get height of water over the ground, which comes out to about 0.00048 meters, or roughly half a millimeter.

So: A liquified Wall wouldn't turn the land into Waterworld. In the hotter parts of global-warming-stricken Westeros, the Wall would evaporate pretty quickly.

Frankly, we wanted to write this story talking about how the Iron Islands would be underwater, the ports of call would become wasted marshlands and King's Landing would be a wading pool unfit for the Iron Throne. But a ghost of a puddle isn't enough to make that happen. And while we love real science about fake topics, there are still rules to follow, even if we made them all up.

What Would Actually Happen to Westeros?

Let's assume the Wall is a cooling system strong enough to be analogous to Earth's ice caps. Losing that could add a lot of serious heat.

The Red Waste, already a scorched desert in the south of Essos, could spread up to the grassy Dothraki Sea, displacing the Dothraki currently holding Daenerys captive and forcing them to invade and settle closer to the coasts to survive, ostensibly setting the groundwork for a war between the Dothraki and large nations like Braavos (where Arya Stark can be found) and Qohor.

Vegetation would be in trouble, so all of those weirwood trees sacred to the Children of the Forest and the Old Gods — where Bran Stark is hanging out in season six — would die out. And of course, with no Wall, the Wildlings would be free to spread south.

Highgarden, where Margaery Tyrell is from, claims the best wine and vineyards in the world. Vineyards are already finicky, where something as subtle as soil acidity can change how the grapes grow. With its main export literally dying on the vine, there goes the nation's income.

Even Daenerys' dragons, those flying emissions nightmares, could be in jeopardy. With receding vegetation in Essos, wildlife might die out — and with it, Rhaegal, Drogon and Viserion's primary food source. Looking for steer, the dragons might fly north and west, possibly to King's Landing, and set the Red Keep on fire looking for human meat.

Game of Thrones Is One Big Metaphor

Last year, a couple Vox writers posited that Game of Thrones is actually all about climate change. The White Walkers represent the impending threat of global calamity nearing ever closer. All the nations that should be figuring out how to combat it are more invested in infighting. The last time the White Walkers appeared, there was a long, brutal winter. But at least the planet wasn't too hot then.

So maybe the White Walkers, and the winter that comes with them, would be the only way to save Westeros. Maybe a deep freeze would make the planet return to equilibrium. Maybe they're the fictional planet's true saviors, returning the land to livable conditions.

They'd just be the only ones who live there, since they'd kill everyone else.

Fortunately, Westeros may never have to suffer a fate like this. They're not the ones burning fossil fuels.