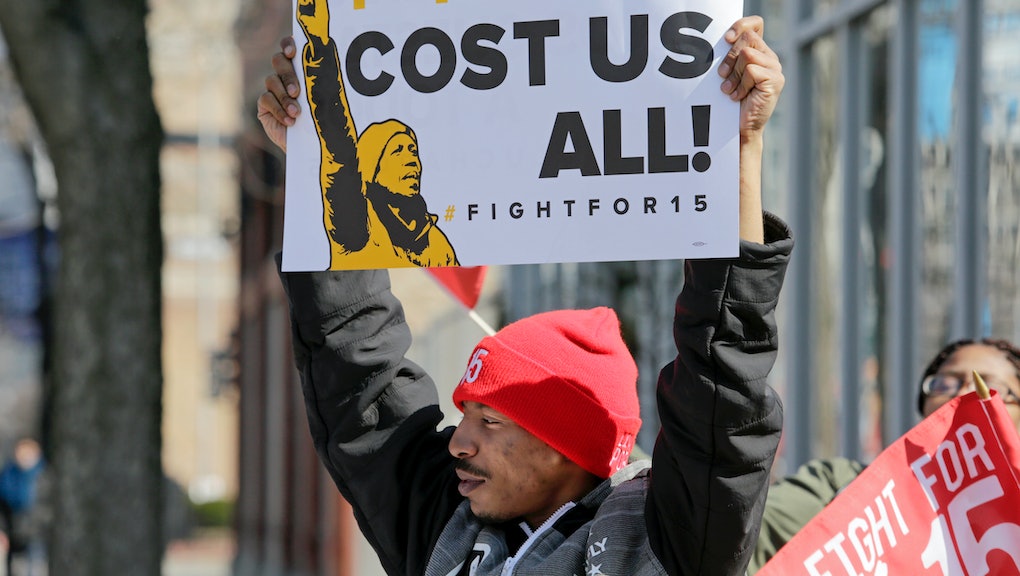 Want to reduce the crime rate? Increase the minimum wage.

That's an argument presented in a report published Monday by the White House's Council of Economic Advisers, which contends that conventions of punishment centered on harsh sentencing for the past three decades have proven ineffective, and at times counterproductive.

The report surveys research showing that longer sentence lengths are not only ineffective as deterrents, but often boost the likelihood of an individual re-offending: "a recent paper estimates that a 10% increase in average sentence length corresponds to a 0 to 0.5% decrease in juvenile arrest rates [and another] recent study finds that each additional sanction year causes an average increase in future offending of 4 to 7 percentage points."

The researchers behind the report think that in order to continue to further bring down the crime rate, which has declined steadily since the 1990s, policymakers need to think outside the jail cell. They offer commonly cited data suggesting that expanding police forces and access to education would help.

But in a slightly less orthodox policy proposal, the authors argue that swiftly raising the minimum wage should also do the trick quite well.

The report cites statistics from the Bureau of Justice, estimating that raising the minimum wage from $7.25 to $12 an hour in 2020 would cause a 3% to 5% reduction in the crime rate. By contrast, spending another $10 billion on incarceration would pull the crime rate down 1% to 4%. The idea is that addressing the material insecurity that often drives people to crime would be a more efficient way to uphold law and order than locking them up after they commit it.

Efficiency, of course, is not the only reason to favor wage increases over expanding the largest prison system in the world. But it's yet another way to argue that investing in people rather than punishment has huge payoffs for everyone.