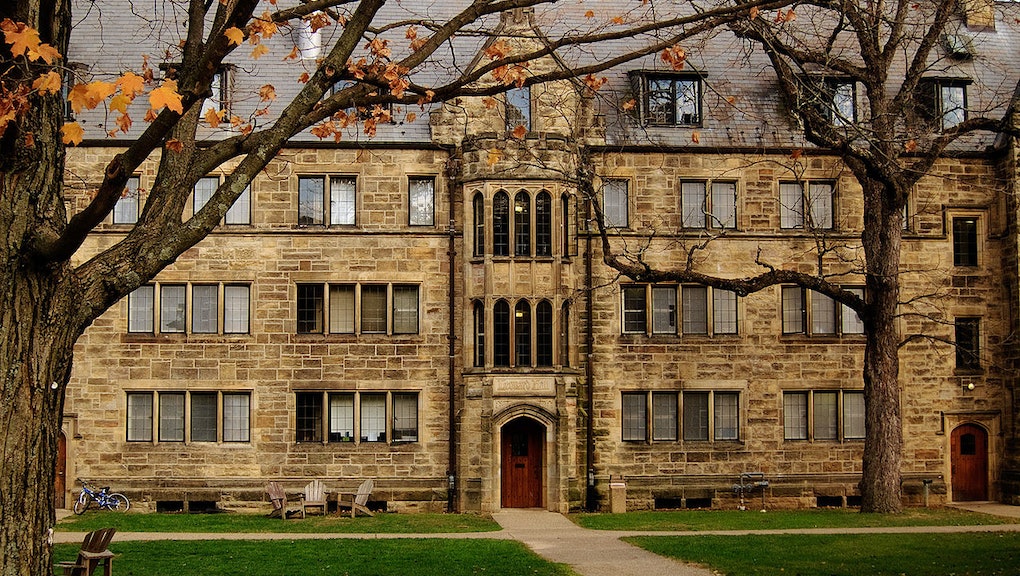 Kenyon College Allegedly Dropped a Rape Case, and the Community Is Furious

In an open letter posted on Monday, Kenyon College alumnus Michael Hayes shares his sister Chelsie's experience as a survivor of rape at the school. Addressed to "Kenyon College, for failing my little sister," the letter begins by explaining that Chelsie Hayes, a current student, was assaulted on the evening of Saturday, Nov. 8, 2015, on the school's campus in Gambier, Ohio.

The piece assails the university's handling of the incident. According to the letter, after a long "administrative process" the school found the accused not guilty of the charges.

"Kenyon has betrayed my trust—a trust with the strength of 23 years," he said. "Kenyon failed my little sister in a way that I, with her permission, refuse to be silent about."

In an email to class representatives obtained by Mic, Kenyon College President Sean Decatur said his administration could not comment on the allegations, citing privacy concerns, but said it has "zero tolerance" policy on sexual assault:

"Over the past 24 hours, the Kenyon community has been made sensitive to issues regarding sexual misconduct. I and no other College administrator can comment on any student conduct case of any type. To do so violates the rights of privacy, and would, in turn, multiply the pain felt by everyone involved. This may seem to some that the College is hiding behind the law, but I believe that this is simply the right thing to do."

According to Michael Hayes' searing account, the victim's mother sent him a text message the day after the assault: Someone named Katie was en route to the hospital with Chelsie Hayes. "She was raped last night," the mother said.

In Michael Hayes' retelling of the family's ordeal, Chelsie Hayes was "sexually assaulted in her dorm room — in and out of consciousness — after drinking a bottle of wine, a couple of beers" at local bar the Gambier Grill, and "taking her three prescribed medications." The alleged attacker told her she was "too cute to be a lesbian."

Read more: Will This Strategy Finally Put an End to Sexual Assault on America's College Campuses?

"My mother followed up with handfuls of messages about how it didn't feel real yet, how everything in our lives had changed while I was so far away and how we had to remain strong for Chelsie with the knowledge that she showered the morning after debating whether or not she wanted to commit suicide. I found strength in the faith I had that Kenyon would see that justice was done for a girl who spent so much of her life wanting to be there ... the little sister of a Kenyon graduate who loved that place with his whole heart."

Chelsie Hayes, who, along with her brother, grew up in Gambier, is reportedly transferring schools next fall.

The frank account calls attention to the epidemic of sexual assault on college campuses. According to the Association of American Universities, 1 in 4 college seniors have experienced unwanted sexual contact. Given how reluctant victims may be to come forward, even this statistic may underrepresent the number of college students who have experienced assault. According to the Department of Justice, 80% of campus sexual assaults go unreported.

In the letter, Michael Hayes writes that what followed his sister's assault was a months-long "administrative process" that found "insufficient evidence to conclude that it was more likely than not that the college's policy on sexual assault had been broken at all." This was "despite her documented injuries, a bed stained with her own blood, her sexual orientation, and the combination of that much alcohol and prescription medication in her body."

Sexual assault cases are difficult to prosecute; the cases often devolve into a "he said; she said" battle. But there are many instances in which survivors and families, friends and communities frustrated with ineffective responses have taken matters into their own hands — protesting, organizing and turning to the media — when other pathways for justice are closed.

In an essay on Kenyon blog the Thrill, sophomore Carolyn Ten Eyck wrote that she spoke with a sexual misconduct adviser who said, "I've never seen a just outcome for a survivor handed down by this administration. Not once."

"It is easy for the college to say that there is 'zero tolerance' for sexual assault," Ten Eyck argued. "If the administration will not take responsibility, who will? ... When will rhetoric become action?"

Mic reached out to Michael Hayes and Kenyon College for comment on the story. We will continue to update it as we gather information to provide a fuller account.

April 27, 2016, 11:36 a.m.: This story has been updated with further details about the university's response to the allegations.