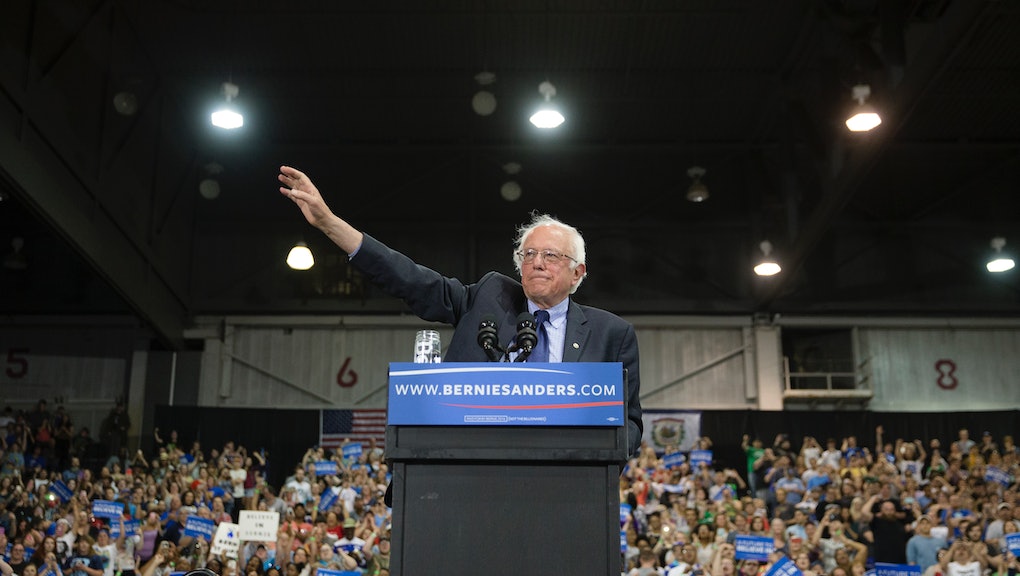 Bernie Sanders' bid for the White House looks to be coming to an end.

After being defeated in four out of five nominating contests in Tuesday's "Acela Primary," Sanders released a statement declaring that his goal at this point is to win delegates "to fight for a progressive party platform" and made no mention of securing the nomination, implicitly admitting that his odds for a victory had gone from grim to almost insurmountable.

The reason for it? Basic electoral math:

Barring some wholly unexpected turn of events, Sanders will not win the nomination. But he's staying in the race for now, and his insurgency is not yet over. Here are three things he can do in the near future to ensure that he makes the most of his current position.

1. Focus sharply on the issues for the rest of the race

With the pressure to win slowly lifting off his shoulders, Sanders should be able to focus with greater intensity on the very thing that made his campaign a success in the first place: the issues that the Democratic establishment is weak on.

Sanders has always run an issues-focused campaign, and for the most part stayed true to his pledge to refrain from personal attacks on his rival Hillary Clinton. But with less pressure to edge her out in the delegate count, he should be able to devote his time and resources more strategically to advocate for the policy positions he wants to see Clinton adopt, or at least shift toward, in the run up to the nomination.

That can be done both through messaging on a national level, and by pulling off select victories in important states that can have a lasting impact on how Clinton will assess her general election path. The most obvious example of how Sanders has done this in the past is his astonishing upset in Michigan, where the real victory was reminding the Clinton camp that she should lean to the left on trade if she wants to lock down battleground states in the Rust Belt in November. Sanders needs to find his next Michigan. It could very well be Indiana.

2. Use major events to consolidate the Sanders wing of the Democratic Party

For Sanders' self-described political revolution to last beyond the primaries, he must harness the grassroots energy he's tapped at the ballot box to keep his progressive corps of supporters engaged in the political process.

A prime opportunity will come June 17-19, just over one week after the final nominating contests in California and elsewhere. That's when pro-Sanders activists will hold the People's Summit in Chicago, with the aim of crafting a "People's Platform" of progressive priorities. The final product could substantially influence the debate at the July convention regarding the Democratic Party's platform.

Rallies and other kinds of public gatherings are generally ephemeral political events. But if they're large enough or they serve as a platform for exceptional rhetoric, they can play a role in inspiring lasting shifts in the political climate. If Sanders' voice continues to resonate at rallies and the People's Summit, and especially if he's able to use these events to deliver some new slam-dunk speeches — his current shtick is effective but overly well-worn at this point — that could help lay some of the groundwork for building a Sanders wing of the Democratic Party.

3. Encourage the rise of Sanders Democrats

If Sanders ends up losing the nomination, he's not going to instantly lose all the political capital he's amassed through his renegade run. He should use it to his advantage.

One way to do it is to help cultivate the rise of other outsider politicians committed to his causes. Sanders can help fundraise and raise awareness for progressive congressional candidates who share his outlook and pledge to work on his key issues.

Back in Washington, his more prominent stature could be put to good use as well. He could attempt to advocate for a major piece of legislation that actually has a chance at garnering bipartisan support — progressive criminal justice reform, for example, has better odds of making it through Washington than it has in decades. And his dissent against bills that he thinks unfairly bolster the wealthy will be louder now than ever before.

Perhaps most importantly of all, he can encourage his supporters to continue to focus their energy on committing to the causes that drew them to his candidacy in the first place. That could mean involvement in local politics. It could mean forming some kind of Sanders-inspired lobbying apparatus, a kind of social democratic MoveOn. It could just mean being more engaged in efforts to clean up government.

Sanders is probably not going to win the nomination. But he has plenty of opportunities for big wins in the coming year.